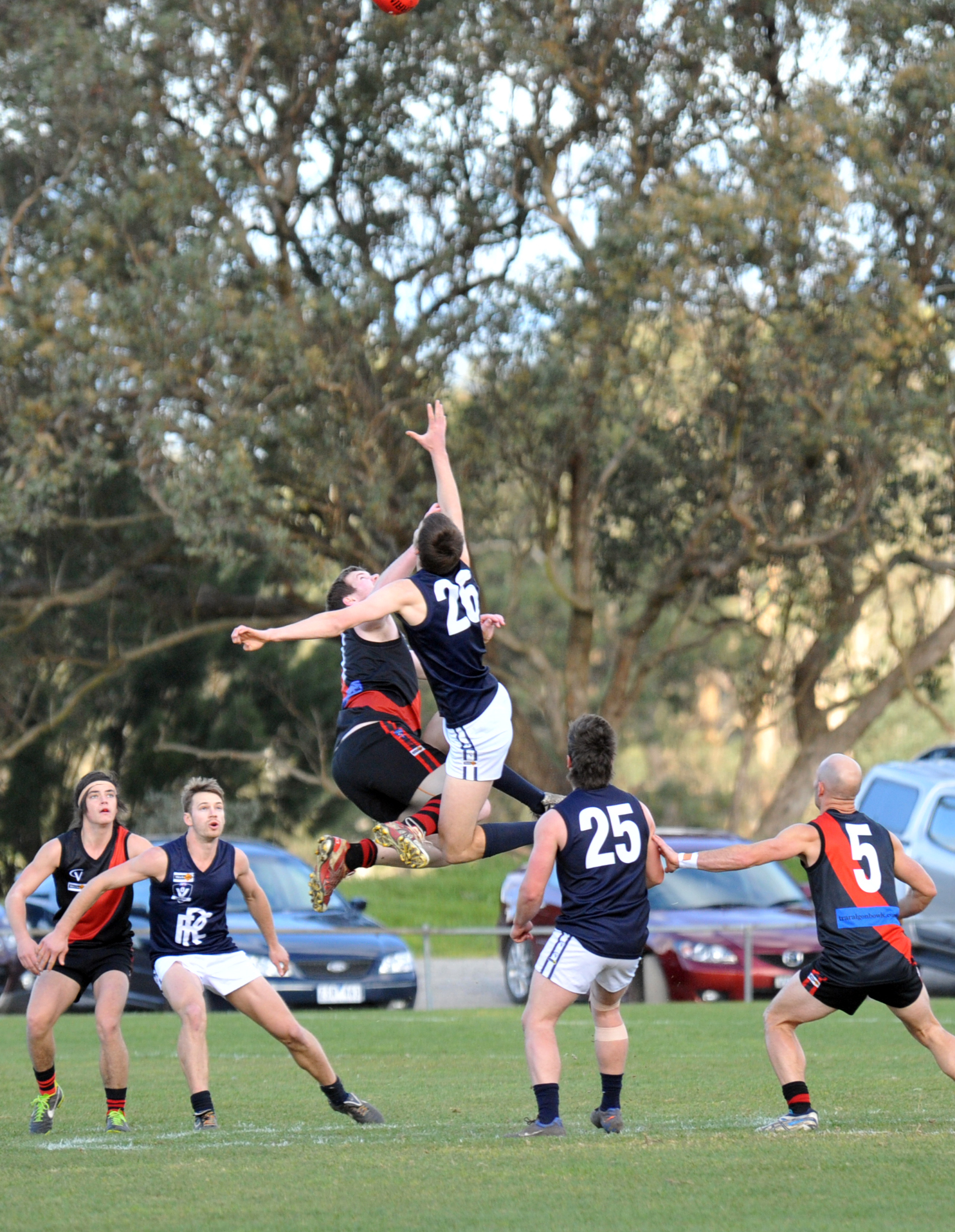 With rain tumbling down for the majority of the match, the Blues dominated the contested ball in slippery conditions and made the Bombers pay on the scoreboard 16.11 (107) to 8.11 (59).

In a frenetic opening, the home side booted seven scoring shots to two ahead of quarter-time and the flood of goals continued after the first change; the Blues kicked seven goals straight in an exceptional first half to set up victory.

Taking early control in the clearance battle, ruckman Frazar Brouns fed the ball to the fleet-footed running brigade of Dale Fleming, Adam Mitchell, Adam Diamond and coach Ben Macreadie, who looked the goods throughout the contest.

The Blues’ engine room was at its damaging best, and was equally matched by trademark run and drive off half-back.

The midfield’s tenacity saw Rosedale hold the upper hand in the contests, but the difference in the end was the Blues’ ability to score when going forward.

Andrew Flanagan took to the conditions like a duck to water, marking the ball in the forward 50 time and time again.

The full forward finished the contest with three majors, with Brouns the next best of the goal scorers with two.

Leading from the outset the Blues were sharp and well drilled, with best on ground Dale Fleming leading the charge as the side went into the first change 20 points up.

They made it two in a row with the Bombers registering their second from the corresponding centre bounce.

The third term was a high scoring affair with seven majors shared under heavy showers, with Hayden Hector and Stephen Hawkins scoring for the visitors.

But as they challenged the Blues responded to lead by 39 at the final change.

The Bombers kick-started the final stanza with the first goal, but as they did throughout the contest the Blues ran rampant, adding a further four to post a comfortable victory.

Best on ground Fleming was electric; on the run through the middle of the ground the pacey midfielder ran hard and pushed forward relentlessly, shaking his tag to dominate the contest.

Ryan Carpenter was a staunch figure, while the Diamond brothers Adam and Rohan pestered the opposition and set up many passages of play.

For the visitors Tom Mustoe toiled hard in the midfield, backline general Guy Sinclair worked hard against Brad Caldwell and Flanagan, and Rhys Martin was among the votes.

SALE CITY fought hard to come from four goals down at the main change in a classic battle fitting of the Anzac spirit under lights on Saturday against Churchill, denying the reigning premier their opening win at Gaskin Park.

At dusk Cougar and Dogs players stood in the middle of the ground as the crowd joined them in marking Anzac Day before the coin toss to start proceedings.

The Cougars led at every change, extending what seemed like a healthy first term margin, but a second half comeback by a plucky City side saw the visitor pick up the league’s biggest scalp in impressive style 11.7 (73) to 7.19 (61).

Hamish Towns got Churchill off to a solid start snaring two majors in the opening term, and the Cougars kicked away to a handy 20-point lead late in the quarter with the Dogs failing to trouble the scoreboard.

Majors to Nick Campbell and Tim Darby in the second term kept the visitors at bay, before the Dogs booted consecutive majors in a spirited premiership term which reeled the Cougars’ buffer back to less than a kick at the final change.

Chris Weller settled Churchill with the first of the final term, but it was short lived as City got the quick response to keep the margin at a straight kick.

With some 19 minutes on the clock City youngster Nick Grainger put the visitor in front.

The Cougars kept coming but City slotted through yet another to retain undefeated status.

The Cougars’ inability to kick straight proved telling at the final siren.

YARRAM came home with a wet sail to bulldoze Gormandale with a nine goal to one point third term among the highlights.

Expecting a physical contest against a bigger bodied side, Demons coach Anthony Pavey would have been pleased with his men’s start – a solid five goal term – which established a 14 point buffer at the main break.

However a see-sawing second term resulted in the visitors reversing a 14-point deficit into a nine-point lead, following Gormandale’s five goal to two term.

The tables then turned again; Yarram’s pressure-laid 25-minute term kept the scoreboard ticking over with eight unanswered majors all but killing the contest.

Four goals from Grif Underwood and three a piece to Jari McDonald and Corbin Sutherland steered the Demons to victory, with Andrew Kiely named best on ground.

For the Tigers Joe Colaciello snared four in a best on ground performance.

A 14 goal to two second half steered the previously winless Woodside Wildcats to their first points of the season with coach Daniel Risol leading from the front.

With a mere four points separating the sides at the long change, the Wildcats remained composed and sniffed victory.

HELD scoreless in the opening quarter, Heyfield turned up the heat to thump Cowwarr by 50 points.

After booting six majors in the second stanza to get back into the contest the Kangaroos did not falter, booting a further six in the second half.

Heyfield’s backline was staunch and battle ready in the second half and held the Saints to one major, thanks in chief to Scott Anderson and Mark Johnston.

The victor’s goals came through Kodie Woodland, who finished the day with four, with Josh Stubbe adding two to his season tally of eight.