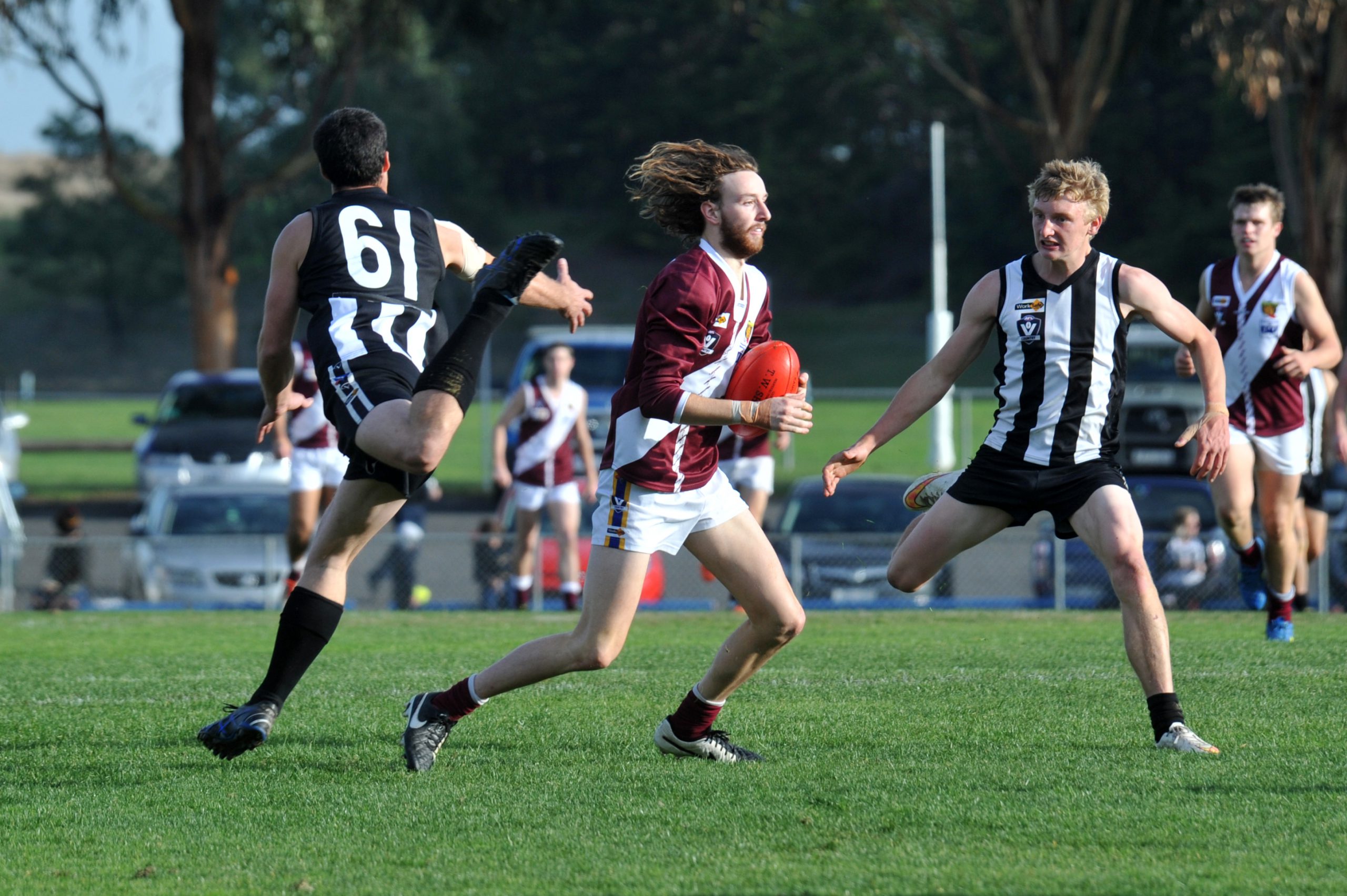 SALE City kept its strong home record intact when it accounted for second placed Yarram in a bruising North Gippsland football encounter at the weekend.

Locked side-by-side on the premiership ladder standings, the contest was an ‘eight point’ game, with the winner breaking clear of the log jam near the top.

City edged clear in a solid second term booting four goals to nil, led by Brad Walsh, Jake Schuback and Jake Milham, as the Dogs reversed a four-point deficit into a four-goal lead.

The Dogs had to hold off a determined Yarram line-up right up to the end of an enthralling final quarter.

Schuback posted the opening major of the fourth term, before Corbin Sutherland got the quick reply from the boundary.

Milham appeared to have scored the sealer for the home side, which through forward Keenan Hughes worked hard to make a contest and pressure the staunch Demons’ defence into making costly turnovers.

Schuback did just that, intercepting Ryan Coulthard’s kick out of the back line to push the margin back out to four straight kicks.

However the Demons were not prepared to wave the white flag and there was no denying Justin Staley from long range, whose bomb into goal inspired hope.

Having booted City’s opener, Dogs weapon David Piasente registered what appeared to be the last for the game, but Yarram’s Staley came again to reduce the margin to 19 at the final siren.

City’s victory was ensured by an inspired midfield performance, led from start to finish by Piasente.

Younger players Mitch Evans, Beau Bennett and Hughes were standouts – pitted against experienced campaigners they held their own and created many opportunities.

Matt Sheridan ran riot along the wing providing drive off half-back, while Coulthard was staunch in defence picking up the likes of Schuback, Hughes and company as he rotated against City’s key forwards.

Grif Underwood never gave up and assisted brother Ryan in booting two majors, with Staley the pick of the scorers finishing with four.

TRARALGON Tyers United produced an upset to down Heyfield on its home turf by 27 points in a season-defining win.

The Bombers went into the contest having only claimed one victory against a fellow top five side in Yarram seven weeks ago, but they made it two, leading at every change to run home solid 14.16 (100) to 10.13 (73) victors.

TTU’s Brian Graham was the man at the coal face who amassed possessions, while Stephen Hawkins gave them the edge in front of goal with his bag of five.

The Bombers registered five majors to two in the opening term to set up the match.

The second term was an even affair on the scoreboard with both sides ticking over majors to finish the stanza with three goals apiece, but TTU extended the lead to 24 points at the long change.

Luke Pratt and Jesse Bedggood looked to spark the Kangaroos in front of goal as they outscored the visitors in the third, however a spirited four-goal final term, orchestrated by defender Guy Sinclair and engine room specialist Hayden Hector, killed the contest.

A CLINICAL performance by the reigning premier Churchill saw the Cougars romp home by 192 points over Glengarry.

Spearheaded by Hamish Towns (eight majors) and Nick Campbell (six), who were at their exhilarating best in front of goal, the Cougars slammed home 11 majors to one in a blistering 25 minutes of play that buried the contest in the first term.

Under siege the Magpies backline was pitted against a line-up with scoring options around the ground, and the Cougars finished with 13 individual goal scorers of which seven scored multiple majors.

The foot was not taken off the pedal as the Cougars scored a further seven majors in the second stanza to close out the opening half.

For the visitors Michael Diaz and Chris Wangman were solid performers.

The Wildcats skipped away to an early five-point, quarter-time lead, with Ryan Foat and Daniel Risol amassing early possessions and standing tall in front of goal.

The home side relished the conditions, booting four goals to two ahead of half-time to blow the margin out to three goals.

The visitors had their chances in the premiership term but failed to capitalise, with the Tigers boasting 10 scoring shots for a return of 4.6 (30) to reel the margin back to eight at the final break.

The Tigers continued to challenge to the final siren; Brendan Solomon was a standout and the main protagonist in front of goal, Kupan Morris continued his season-defying form and Jack Wyhoon was a notable performer, but it was not enough to scrape over the line.

Woodside was well-served by Foat, Risol, Ben Johnson and Shane Thorne who finished with three goals.

JACK Tatterson ran rampant with six majors as Rosedale held on to top place with a comfortable 123-point win over Cowwarr.

The Saints started strongly, taking a narrow lead into the first change before the visitors pounced with a nine-goal-to-one second term, which saw Tatterson and Dale Fleming (three) light up the forward 50 arc.

Coach Ben Macreadie was in form, Fleming had the ball on a string and caused headaches for Cowwarr’s coach Luke Cooper as he searched for the right matchup, defender Scott Johnstone was a general in defence with Rohan Diamond solid.