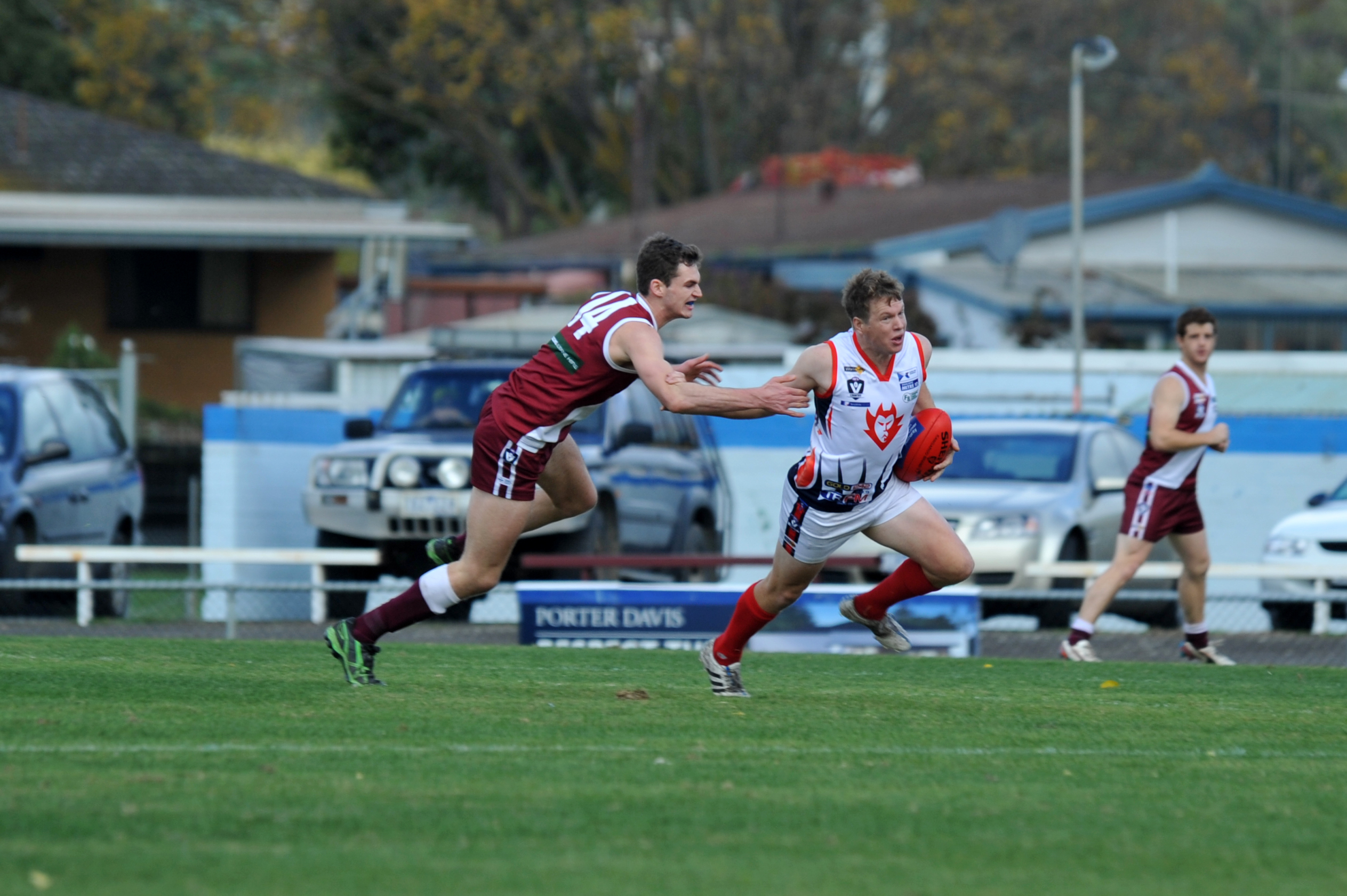 “Very disappointing after last week, to go out and do that,” Lions coach Adrian Burgiel said.

“We are just lacking consistency.”

Fresh from a confidence-boosting win over Sale, the Lions picked up where they left off, booting five goals to one in the first quarter to lead the Redlegs by 26 points.

Bairnsdale clawed its way back into the contest in the second to get within 20 points at half-time.

In one of its best performances of the year so far, the Redlegs fought its way back into the contest to lead by one point at three-quarter-time.

However Moe once again got the jump in the last.

“We were 39 points up halfway through the second quarter and playing some really good footy,” Burgiel said.

“We were 17 points up in the last but we just couldn’t finish them off. We let too many goals go through.”

The Redlegs kicked five goals to four to steal the win.

“They (Bairnsdale) got on top of us. They got a run on us and we made some bad decisions that cost us the match. We stopped running and they kicked some good goals,” Burgiel said.

The much-needed win was Bairnsdale’s second for the season.

“It was a great win by the boys. Moe got off to a great start. To be down by 39 points midway through second and to fight back, and then again in the last once again Moe played really good footy and gained ascendancy, the boys found something and it was fantastic to get the points,” Bairnsdale coach Shaun Mooney said.

The home coach was particularly pleased by the performance of his younger players.

“Having some experienced players still out of the team has given us an opportunity to play some young players and they’ve really stood up,” Mooney said.

“We had 13 players aged 21 and under, it was a great effort. And the experienced players really led the way when the game was in the balance.”

Jacob Green top scored for the Redlegs with three majors, but Cameron Streeter was named best on ground.

MAFFRA sent a message to the rest of the competition, leading at every change to produce a convincing 62-point win over Wonthaggi in the battle between second and third.

Booting a bag of eight goals, full forward Darren Sheen was the star as the Eagles outclassed one of the best defensive teams in the competition.

“Got a couple of cheap ones, I’ll take them,” Sheen said.

“We tried to play four quarters today and we did.

“Last week against Warragul we played three and a half quarters and today we put it together for four and the scoreboard shows that, we had a good win.”

Despite the heroics in the forward line, Sheen said there had been a big focus at Maffra this year on its defensive efforts inside its own 50.

“Forwards can become lazy and that’s one of the things we are working on, to turn the ball over and keep it in there as long as we can and try to get goals,” he said.

SALE bounced back from a disappointing loss to Moe to beat top five side Drouin by 51 points.

“Really pleased that we responded to the disappointment of last week to put in a strong four quarters,” Magpies coach Travis Ronaldson said.

Bolstered by a big list of inclusions, the Magpies stormed to the lead early and never looked back.

“We had some good ins which certainly helped but it was our increased effort, work rate and intensity which gave us the opportunity to win,” Ronaldson said.

“While the Moe game is certainly one that got away, we hit the midway point on the positive side of the ledger at 5-4 with our season in our hands.

“I am hoping we will continue to improve through to the end of the year and that our best footy is still in front of us.”

With three goals each, Jake Thomas and William Stephenson were among nine individual goal kickers for the Magpies.