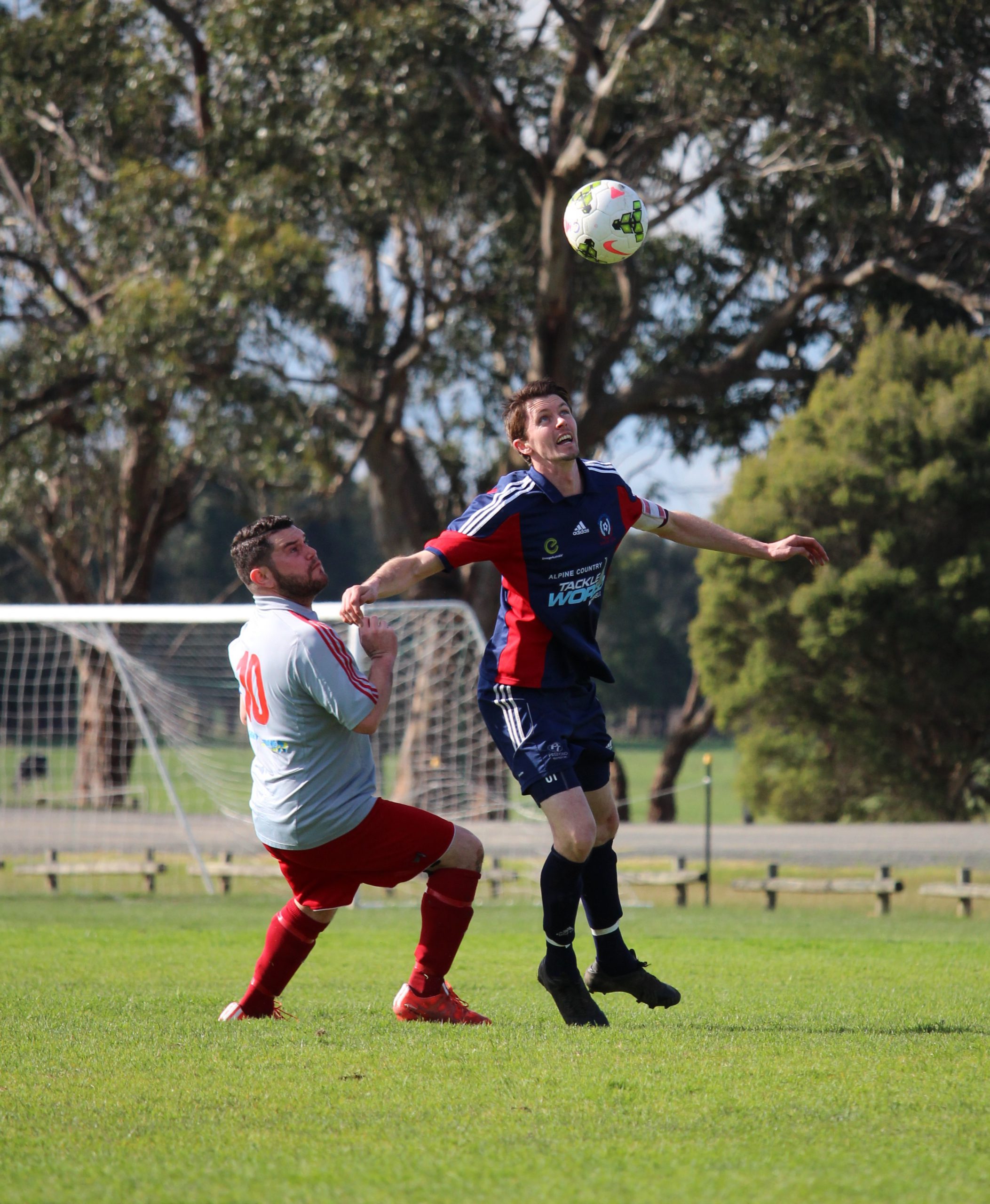 MOE United put a dent in Falcons 2000’s Gippsland Soccer League title hopes on Sunday after knocking the Birds off 3-1 at Olympic Park.

The ladder leader’s first loss of the season left it vulnerable to a challenge from Sale United ahead of the top two showdown next weekend, with the Swans four points in arrears but holding a game in hand.

Victory also kept the Red Devils’ premiership aspirations alive, putting the third-placed outfit seven points off the pace, also with a game in hand on Falcons.

After a couple of great escapes in recent rounds, there was to be no Houdini act for Falcons after going 2-0 down by half-time.

The Birds managed one second half goal through DJ Matar but the home team cancelled it out with a strike of their own to seal an important three points.

Joel Baldwin, Matt Shearing and Nick Dastey did the damage for the Devils.

CHURCHILL played host to one of the matches of round 22 on Sunday when the Rams faced off against fourth-placed Newborough Yallourn United.

The first half saw both sides adopt a defensive approach with few scoring opportunities emerging at either end.

At the 44-minute mark of the first half NYU broke through when Mark Fairbrother fought his way past three Churchill defenders and found the back of the net.

After half-time the game moved up a gear, with both sides creating plenty of chances, but neither could score the vital goal.

The Combine held on to their 1-0 lead to the final whistle, with a red card to Churchill blunting the Rams’ late challenge.

MONASH prepared for Sunday’s Borough Derby with a 4-0 win over East Gippsland.

A quick opening saw both sides fashion chances before most spectators had settled in.

The home side took the lead in the 12th minute when Ethan Lawrence rifled into the top of the net after being slipped through by Ty Christy.

He was unable to stop Monash’s second midway through the half when Christy prodded home Lawrence’s cross from close range.

Reidy kept his side in the game with another sprawling save to deny Lawrence’s powerful header before the break.

It was then Monash stand in ‘keeper Don McDougall’s chance to shine, tipping over a Jaydon Steele shot early in the second half.

The Wolves were continually denied by Reidy, but eventually were able to find the back of the net via the penalty spot.

First Ryan Semple was fouled and stepped up to convert before Christy was bundled over in the box with Marc Koolen slotting home for a comfortable win.

OLYMPIANS could have been forgiven for expecting a free ride at Ronald Reserve, but came under fire from an improved Morwell Pegasus.

The Traralgon side came away with a 4-2 victory but was forced to earn the points by a competitive Horsemen outfit.

After surviving a scare in the opening minute Olympians recovered to hit the scoresheet early.

Former Pegasus marksman Heydan Cook directed a glancing header beyond his brother Leon Cook in the Pegasus goal to establish a 1-0 lead.

The home side hit back from the corner, with Drew Sedgwick nodding a deep ball into the path of Allen Metcalf who converted for his first senior goal.

With scores locked 1-1 at half-time, Olympians came out firing in the second half with a slew of shots in the early exchanges.

They were rewarded with their second, but Pegasus tied matters again through Alradi Ismail.

Olympians’ quality came to the fore in the final 20 minutes, netting twice to seal the win.

TYERS continued its trend of vast improvement this season with a 2-0 win over Traralgon City.

After going winless in 2014 the Lightning now has seven in the W column this season.

FORTUNA steamrolled Trafalgar 8-0 away from home.

Tim Lee, Hayden Tanti and Ivan Vekic all chimed in for doubles, while Jayden Scott also found the back of the net.