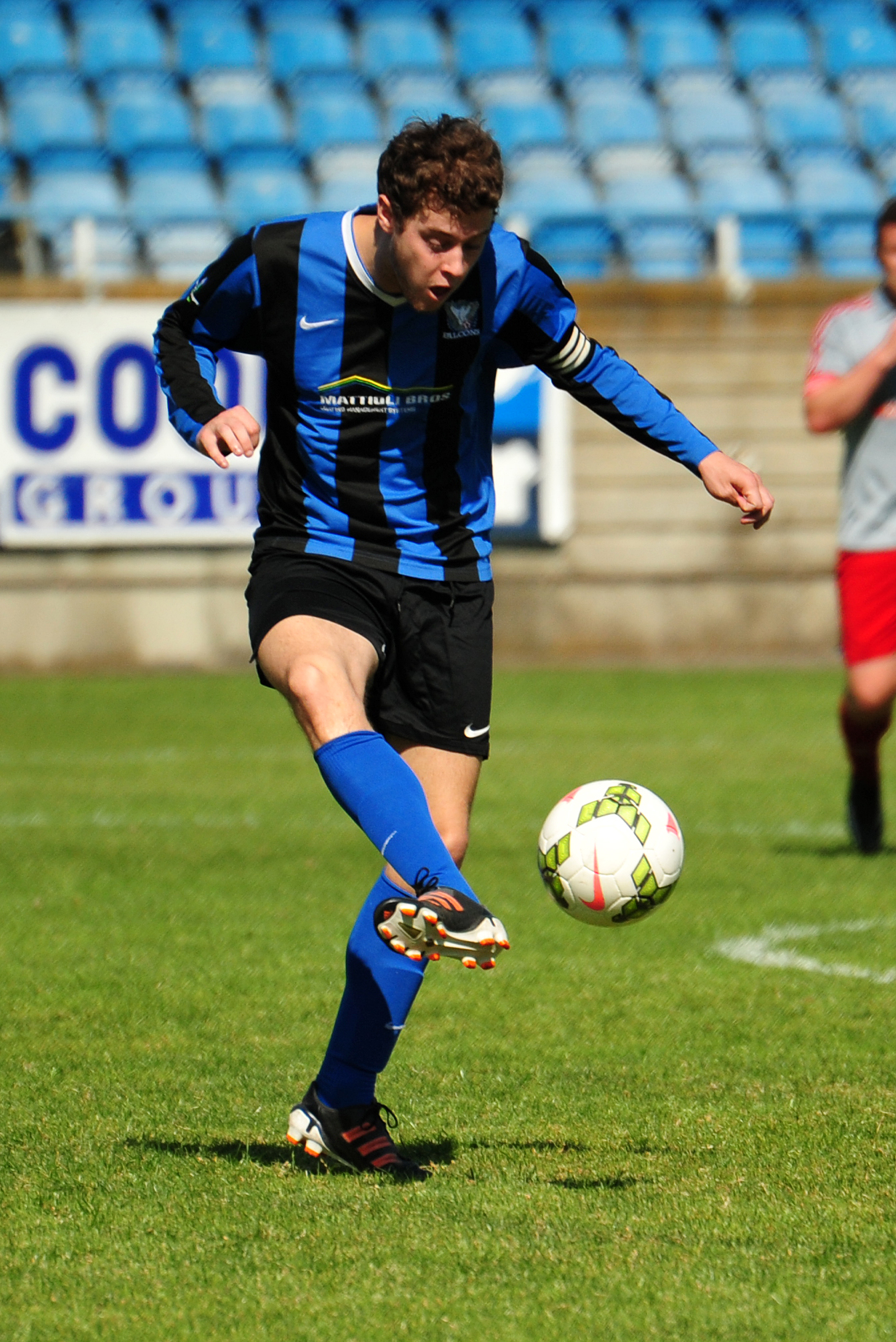 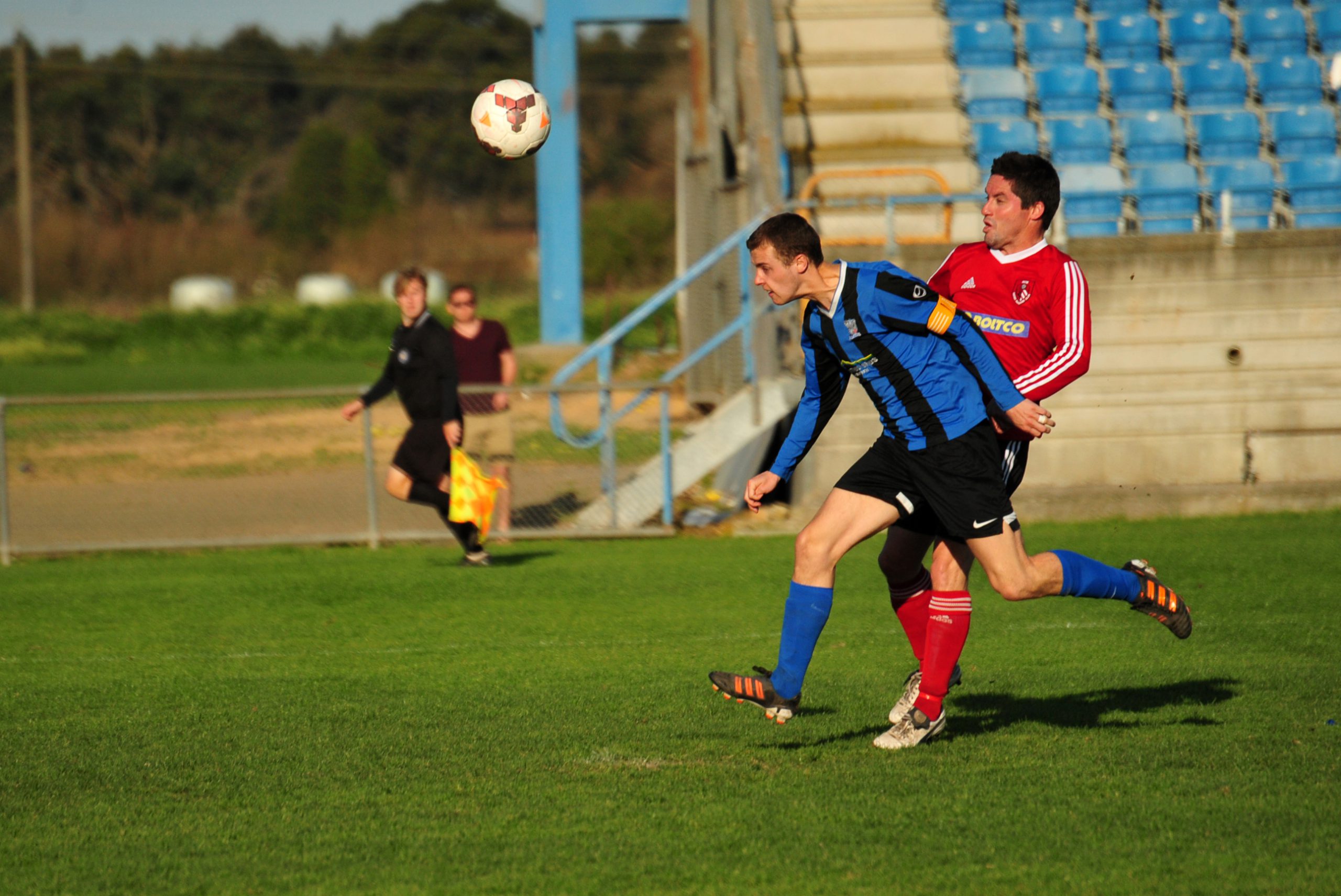 The 25 year-old scored in all but three of his 24 appearances in the GSL central senior division this year, with seven hat-tricks, including two four-goal hauls against Olympians and Pegasus, and a season-high bag of six against Trafalgar, along with six braces.

It was a year punctuated by sublime strikes and clinical finishes, but a rare miss from the penalty spot when the league title was on the line against Sale United stood out the most to the prolific forward.

Falcons went on to lose that pivotal match 1-0 and seemingly their title aspirations with it.

Kennedy’s reaction to that flub spoke volumes about a consummate team player.

“It was a big relief (to win the league) in the end because I put so much pressure on myself, especially after that game up in Sale where I thought I’d cost us the league,” Kennedy said.

“I would have given away every single goal I’d scored in the year just for that one to go in.”

In the end Sale slipped up at the final hurdle allowing Falcons to take a first league title since 1973, then a week later a second consecutive Battle of Britain Cup.

The marquee marksman’s double in the cup final took him to a season half century of goals in all competitions, following 32 in total the season prior.

His monster haul saw him awarded the Scott Frendo medal as players’ player at the GSL presentation on Friday, but the honour paled in comparison to seeing the Falcons 2000 trophy cabinet full.

“Winning team trophies is what it’s really about,” Kennedy said.

“Who do you celebrate a golden boot with? The individual trophy I won last year… they’re still at the trophy cabinet at the club. I haven’t taken them home and I won’t take any of these home, that’s where they belong.”

However, the medal does bear special significance for Kennedy, who played against Frendo upon starting out in the senior league as a teenager.

“I don’t play soccer for individual awards, but if I was ever going to (want to) win one it’d be that one… because it’s your peers, the other players are voting for you,” he said.

“Also because it’s the Scott Frendo medal; I’ve played in the GSL for about 11 years and I had the privilege to play against him, I knew who he was and I have a lot of respect for the way they go about it – they keep his name alive.

“I’ve got a lot of respect for Tyers as a club, I’ve got heaps of great mates there, so it’s a huge honour to win that medal.”

Kennedy’s talent comes as little surprise given his run of coaches, starting from his junior years at Morwell Pegasus with Paul Hutchinson, Shaun Bye, Mick Pace and now A-League legend John Hutchinson through to the likes of Luke Cheney and Nick D’Alessandro.

After six years at Pegs a young Kennedy moved across town to Falcons for his second year of under 14s, and the Birds nest has been like a second home since.

He captained Falcons’ under 16s to the treble and was among the club’s brightest talents until he fell out with senior coaching staff midway through 2010.

After taking half a year off, Kennedy returned to the park to play under former teammate and GSL legend Cheney at Churchill, who he had taken the field alongside in his first senior appearance for Falcons.

“I think my first senior game I was 15 at Falcons and Luke (Cheney) was the captain and the gun player,” Kennedy said.

“He rang me and I said if I’m going to play this year… I love Falcons but if I play for anyone (else) it’ll be for you.”

The former Falcon enjoyed incredible success at the Rams during a dominant era, in which the club won all three titles across three grades in 2012.

Churchill helped Kennedy learn how to win, while its influential coach Cheney showed him how to find the back of the net.

“They’re just so used to winning, when it comes down to the end of the game they have so much experience… winning was just in their blood so I sort of got used to that as well,” he said.

“I’ve always thought of myself as a number 10 playing as a number nine, because we haven’t had strikers. So maybe I’ve passed too much or maybe just not ruthless enough, but I just sort of changed and said I need to start taking more responsibility.

“I played with Luke and watched how he played – he’s been the benchmark striker for as long as I can remember, so I try to emulate what he does; he’s hungry but it’s a good hungry and that’s what you need for a number nine.

After two seasons with the Rams Kennedy felt “it was time” to return to his spiritual home at Falcons 2000.

While the Birds now rule the roost, his return to the Morwell club under then coach Mauro De Luca did not yield instant success.

Falcons finished seventh and Kennedy netted just five goals, half as many as the season prior in a star studded forward line with the likes of Cheney and Taylor Jackson to contend with.

The appointment of best friend D’Alessandro to the top job in 2013 changed everything, and the road to the top has been a fixation for both.

“To win the league was sort of an obsession from me and Dela,” Kennedy said.

“We just texted all through pre-season, every night, every day about how we wanted to win it. I wanted to win it for Tony Salvatore the president, for Dela, for (life member) Ernie (Mendez) who’s been there through all the downtimes.

“He (D’Alessandro) is my best mate and if I do well he does well. I hate losing… as long as we’re winning and he’s doing well (that’s the main thing).”

Kennedy cited the inclusion of Tommy D’Alia and brother Jordan Kennedy as influential inclusions in 2014 who helped reignite the club.

He also highlighted the role of Stefan Baccega, who he labelled the GSL best centre back of the past decade, and lamented that he missed this season’s trophy wins with a busted leg.

But he reserved most of his praise for D’Alessandro and his ability to find a niche for everyone in the squad.

“We went from (seventh) to second and we won the Battle of Britain in 2014 and he’s turned us all around. He gave us a lot bigger work ethic and gave us that winning mentality. Some of the other boys had never won any trophies (before he came along),” Kennedy said.

“My brother (Jordan) and Isaac Abas they were attackers, but they were average attackers, and he’s turned them into wingbacks. Now they’re two of the best in the league. He’s just got a knack for getting the best out of people.”

The humble striker took little credit for his achievements this season, putting it mostly down to a good team, which helped set him up.

His teammates, and the rest of the league, might argue that there’s a bit more to it than that.