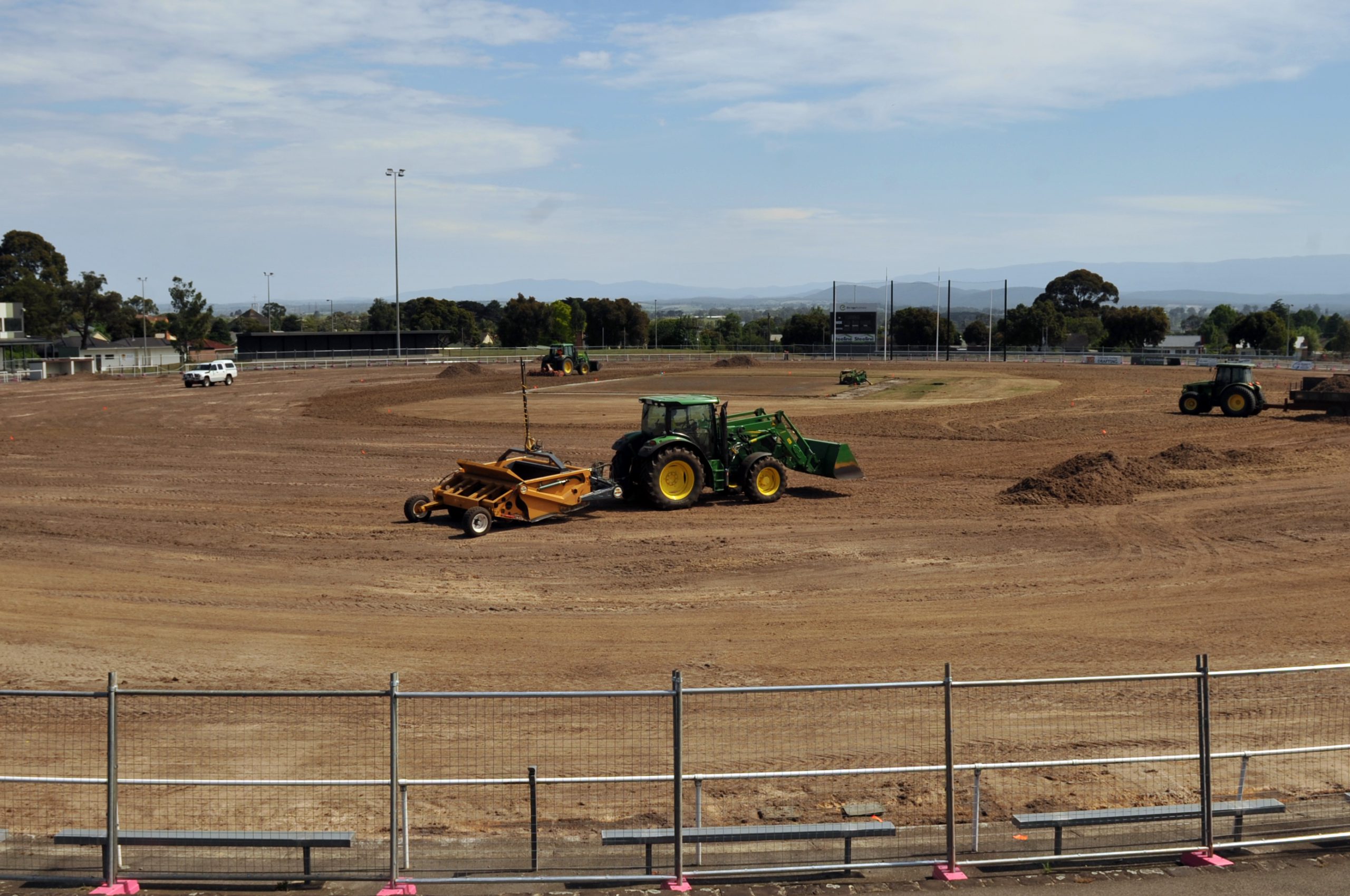 TED Summerton Reserve has gone back under the knife to correct a semi-botched 2010 facelift.

The Moe Recreation Reserve has been allocated $600,000 for capital works to correct issues with the playing surface which have endured despite a $5 million renovation five years ago.

New drainage, an irrigation system and total resurfacing was implemented as part of the multi-million dollar project, but water-pooling continued to transform the ground into a boggy mess post-completion in periods of high rainfall.

“They raised it with us the condition of the ground and it gradually got worse… it was starting to smell, it was actually rotting,” Mullen said.

He said a council report identified the issue was not with the new irrigation and drainage system, which will not be altered in the current development, but the top layer of soil and turf.

“The report we had done identified that the top 50 millimetres of the grass and soil was not real good, so it (the project) is to strip off that 50mm,” he said.

“It also identified it probably wasn’t the best shape so what we’re doing is raising, by 200mm, the whole ground so it’s more domed which in turn will drain better.”

The capital works project will utilise laser levelling for the new surface which will be underpinned by new contours with couch grass maxi rolls to be laid in order to reduce the consolidation period.

A new cricket wicket will also be laid in the centre of the ground.

Mullen said while it was frustrating to revisit the project so soon after a major redevelopment, council was pleased to have reached a solution.

“It’s not ideal, obviously you don’t want to be going back and re-doing work, but unfortunately these things happen,” he said.

“It’s probably moreso (frustrating) for the (football) club. What we’ve tried to do is work with them, they’ve been off once, and we wanted to minimise that hurt for the club.

“Pre-season we’ve made other arrangements with the club and… they’ve been really good. We’ve found alternative venues and it’s difficult for them but they have been really cooperative.”

Grass is expected to be put down around Christmas time and the ground should be ready in time for the start of the Gippsland League football season.

Moe Football Netball Club president Manny Gelagotis said the field had been “shocking” at times during the past couple of years and lauded council for its response.

“Two years ago we had a lot of rain and the ground was unconditionally not good enough. We had some strong input and so did council, and thank God common sense prevailed,” Gelagotis said.

“Council have been tremendous, from our perspective they’ve acknowledged what’s gone wrong, have totally taken it on board and I can’t praise them enough for what they’re doing and the way they’ve communicated with us.”

Gelagotis said Ted Summerton was a crucial resource for the Moe community and was excited to see it return to its best condition.

“In terms of the club’s future moving forward it’s exactly what we need and what we want, not only for our club but for the city,” he said.

“It’s a state of the art facility and once the ground is completed it’ll be one of the best in Victoria.

“We’ve got to create an opportunity and platform for people to be safe and provide a facility that’s to the standard of being in the premier competition of (Gippsland) football. We’ve got an outcome and it’s sensational for the club.”