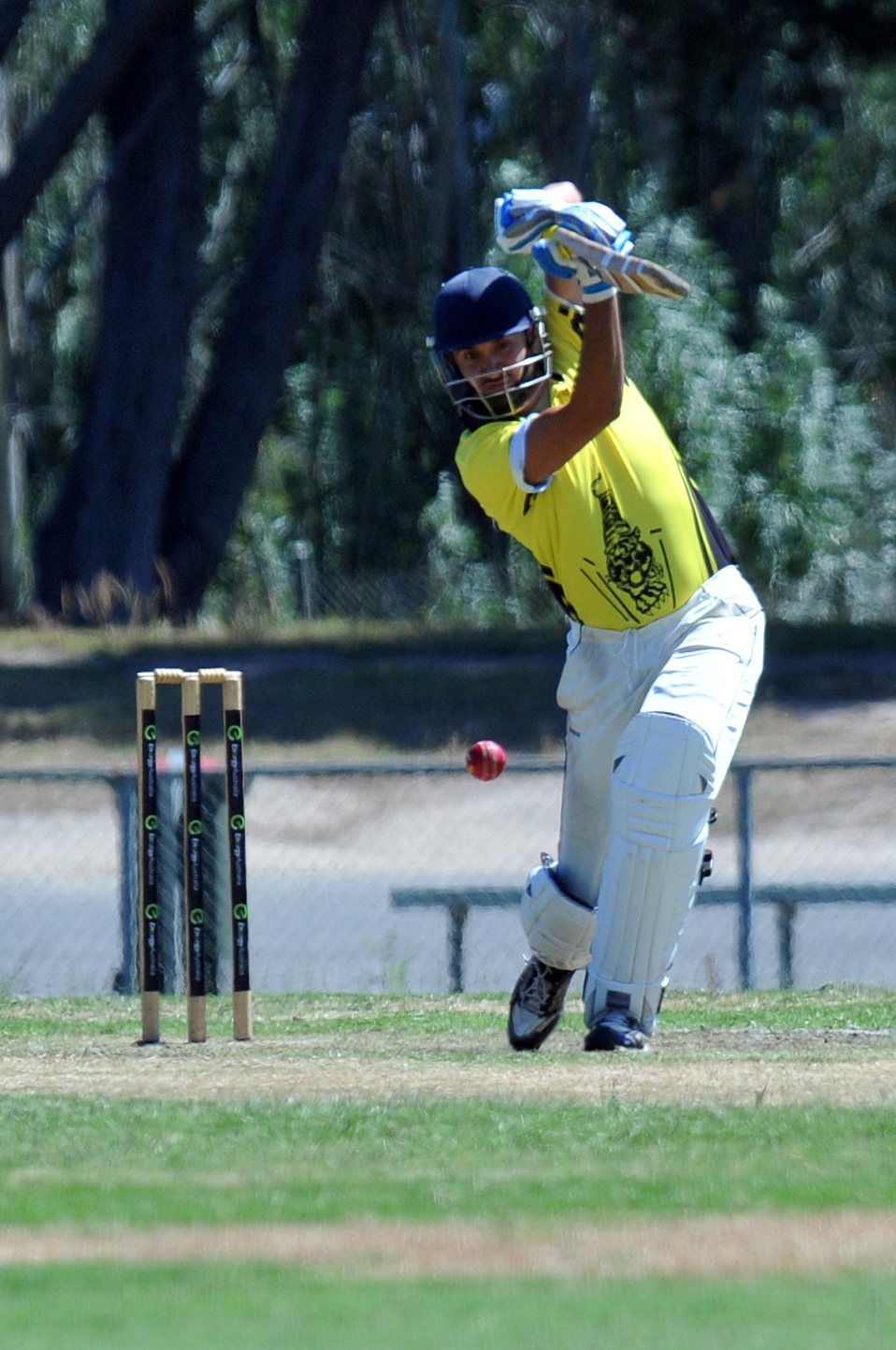 MORWELL stormed into second place on the Central Gippsland Cricket Association A grade ladder with an emphatic win over defending champion Trafalgar.

The Ships’ total of 6/133 was always likely to be well short of a winning score and the Tigers cashed in.

The visitors were missing the services of hard-hitting opening batsman James Blaser, so fast-bowler Todd Mann was promoted to open with Aiden George.

The pair added 33 before the former was dismissed by Roger Henry.

Trafalgar was struggling to score freely thanks to tight bowling, and Rob Semmler picked up the wicket of George for 26 before having captain Rhys Holdsworth caught by Jackson Beani.

Holdsworth’s dismissal at 3/78 meant a partnership was required, and the experienced John Assmussen and young gun Blair Clymo delivered.

Assmussen top-scored with 34 while Clymo, fresh from a brilliant week for Central Gippsland in under 14 Junior Country Week where he was leading runscorer, put together an unbeaten 29.

Brendan Dawson and Daniel Heathcote were both dismissed without scoring as the Ships tried to accelerate late in the innings but lacked the firepower to do so.

Morwell’s bowlers were excellent in keeping the runs down as Roger Henry (1/17 from eight overs) and Mark Cukier (0/20 from 10 overs) in particular were hard to get away.

The Tigers lost Jackson Beani early in the chase, nicking off to Todd Mann, and other opener Riyaz Pathan followed a while later for 21.

At 2/48 Morwell was similarly poised before captain Rory Hare (46) took the game by the scruff of the neck and almost to the finish line, falling with 26 required for victory but with seven wickets remaining and plenty of overs to go.

Gavin Bailey was recalled from second grade and responded with a fighting 44, while Mark Cukier and Brendan Brincat both chipped in with scores to get extra batting points once the Tigers had coasted past the target score.

Trafalgar regularly picked up wickets however allowed Morwell to score quickly, with Daniel Heathcote and Rhys Holdsworth both picking up a pair of wickets but leaking runs.

Trafalgar now sits in second-last place, making its upcoming clash with Latrobe a must-win to save its season.

MIRBOO North suffered just its second defeat of the season, and second against Latrobe, but just held on to the top spot.

Shane Peters won the toss and chose to bat first, however the Tigers lost Englishman Adam Mates early for his first single figure score of the season.

Sharks captain Brendan Evans nailed Jesse Giardina for a duck and at 4/38 the home side was in dire straits.

Benn Zomer dropped a catch off Rob Phoenix that would prove costly before the Tigers’ ex-captain teamed up with the incumbent skipper Shane Peters to add 80 before Johnson dismissed Phoenix for 52.

Tyron Gamage then had Peters caught behind as the bowlers restricted runs and cleaned up the tail.

With 9/166 on the board, the Tigers needed early wickets and when Justin Vajler fell at 1/35 they could smell blood.

Anthony Bloomfield, batting with a runner after injuring himself while bowling, teamed up with Matt Brewer to extinguish the home side’s hopes; the veteran struck 86 and in the process became just the second player in CGCA history to make 9000 first grade runs.

Brewer played second fiddle, contributing 30 to the 85 run stand before Bloomfield and Steven Freshwater (20) guided the Sharks to a memorable win.

Leg-spinner Dale Banks nabbed two wickets but the Tigers were unable to create any pressure in the face of a sterling knock from a legend of the league.

The Panthers did the double on the Bombers as Yallourn North suffered its second defeat to the newly-promoted side.

Batting first the Bombers lost Evan Sheekey without scoring in the first over to Dillon Leys, slumping to 3/22 after the dismissals of Stu Anderson and Aidan Vesty.

The total of 162 was going to be tough to defend on a batsman-friendly wicket but the Panthers lost Ossy Brennan in their second over for a duck.

A mammoth partnership of 127 between star batsman Luke Heath (48) and skipper Stan Urbanic (85) all but secured the points for the visitors, before Yallourn North skipper Spiteri brought himself on to claim 4/27.

His heroics couldn’t stop the Panthers passing the total and reaching 198 all out.

MORWELL emerged victorious in the battle of the top two as the home side snatched top spot from Mirboo North in the all-Tiger clash.

Mirboo North posted 9/191 thanks to a brilliant 92 from Jed Alexander however he lacked support from his teammates, with nobody else in the top seven making it to double figures.

Young gun Brandon Mayberry was promoted from third grade after scoring heavily in his last two games and responded with an excellent 58, while Shane Gniel contributed 33 from down the order as Morwell replied with 8/200.

Alexander took 4/37 to cap a brilliant personal match in a losing side.

Michael Parker was the only bowler to have much luck for the Ships with 4/32.

Trafalgar’s lineup included first grade centurion and premiership player Chris Robinson, however Bryce Dodd bowled him for a duck on his way to 3/31 while Jacob Cecil took 3/17 to make sure of the points.

Justin Morrow’s fighting 46 restored some pride for the hapless visitors before they were all out for 121.

MOE nabbed a valuable win over Yallourn North, after recovering from the early loss of Ryan Sim for a duck to post 9/195.

The total was shaped by a valiant knock of 76 by Ayden Kelly, who will hope to use this innings as a springboard for the rest of the season.

Ken Wiggins (42) and Stephen Pearson (36) did their best to fight it out for the Bombers but Ryan Sim bounced back to take 5/34, while Ron Whitney took 3/13.

NEWBOROUGH scored a rare win over St Vincents, thanks to John Murray (53*) and Leigh Colgrave (32).

Defending 6/173, the Bulldogs ran out winners by just six runs thanks to Daniel Farmer who took 5/34.

Most of the Saints batsmen got starts but failed to carry on with the job.

LATROBE Sharks threw away the chance to move above Rawson.

They blew the Kookaburras away for just 117 thanks to 4/20 from speedster Mitch Cowell, as only Tyson Armstrong (32) and Andrew Cochrane (26) made it to double figures.

Bradley Aitken top-scored with 49 as Shane Nelson bowled the visitors to victory with 5/20.

Liam Swallow was the Blues’ best performer with the ball, taking 2/24.

Chasing 251 Thorpdale did their best to make a go of it.

Zac O’Connell struck 59 and Shannon Pickering 37 but Ryan Vink destroyed the tail with 5/14 to secure six points for the Colts.