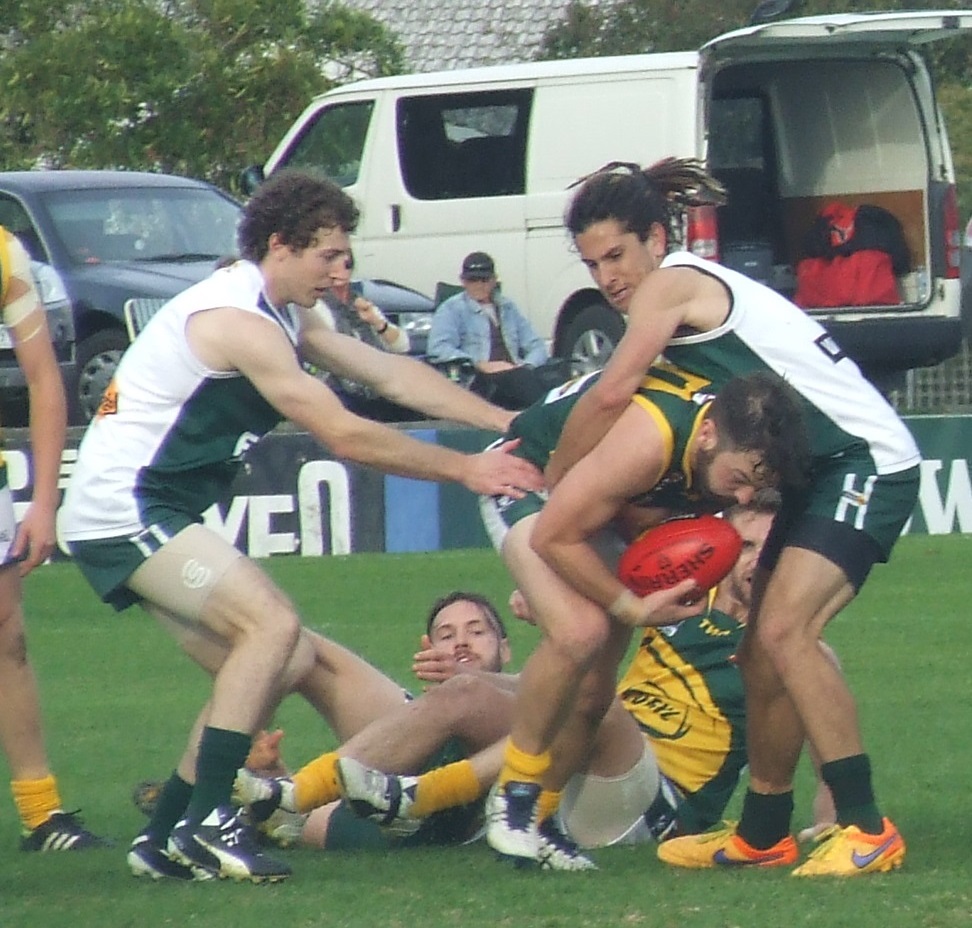 COLAC District Football League was too good for the Mid Gippsland FL on Saturday at Colac.

The home side moved the ball too quickly for Mid Gippsland to run out comprehensive winners by 61 points.

Mid Gippsland had the breeze in the first term but early avenues to goal went astray; with the first five scoring shots of the match the visitor could only register 1.4 (10) before Colac DFL goaled.

Kris Berchtold was busy in the first eight minutes, picking up five kicks, but his super-boot was missing to register four behinds.

A lapse in defence allowed Colac’s Daniel Razga to boot a major for the host.

It was end-to-end football with the defenders on both sides playing strong.

Mid Gippsland lost playmaker Shane Peters with a knee injury, which could keep him out of action for four weeks.

Ruckman Andrew Brown was winning the knockouts but Mid Gippsland was losing the clearances as Colac sharked the ball away.

After an even first term Mid Gippsland opened scoring in the second with a goal through Zac Kilgower to earn a small lead, before Colac swung into the game.

Elusive rover Ben Cox snagged two goals in two minutes and it was game on.

Colac started to take charge with a further three six-pointers and the home side looked more settled.

Mid Gippsland was giving the ball away too easily with Colac looking faster, and the host had players better positioned.

Mid Gippsland made a raft of changes to quell the run-on style of Colac but to little avail.

It was the backline of Liam McGuane, Khan Beckett and Adrian Murray who kept out the Mid Gippy forwards, who failed to score in a tight term.

Aided by the wind Colac was able to take control; forwards Ben Cox and Tom Spokes tore Mid Gippsland apart with their speed and skill.

Colac was playing in front and reaping the benefits.

Mirboo North pair Tristan Salerno and Josh Taylor were busy but there were too many Mid Gippy players who failed under pressure.

Tyler Brown ran his feet off all day with little reward, Steve Pearson was a great trier and Anthony Rosato put in a valuable game.

Colac was banging through goals while Mid Gippsland was fumbling around without too much purpose.

Interestingly of the 17 goals in the match 13 were kicked to the southern end favoured by the breeze.

It was Mid Gippsland’s third successive loss at interleague level and questions will be asked as to why.

It was a bad day overall as Mid Gippsland lost both football games and three netball games.

Mid Gippsland was competitive for three quarters against Colac in an entertaining under 18 match before eventually losing by 53 points.

After establishing a four-point lead at the first break Colac came out in the second and belted through 7.5 (47) to nil to take control by half-time.

Again the home side was in control and proved too elusive for the MGFL which, apart from the second quarter lapse, was in the match.