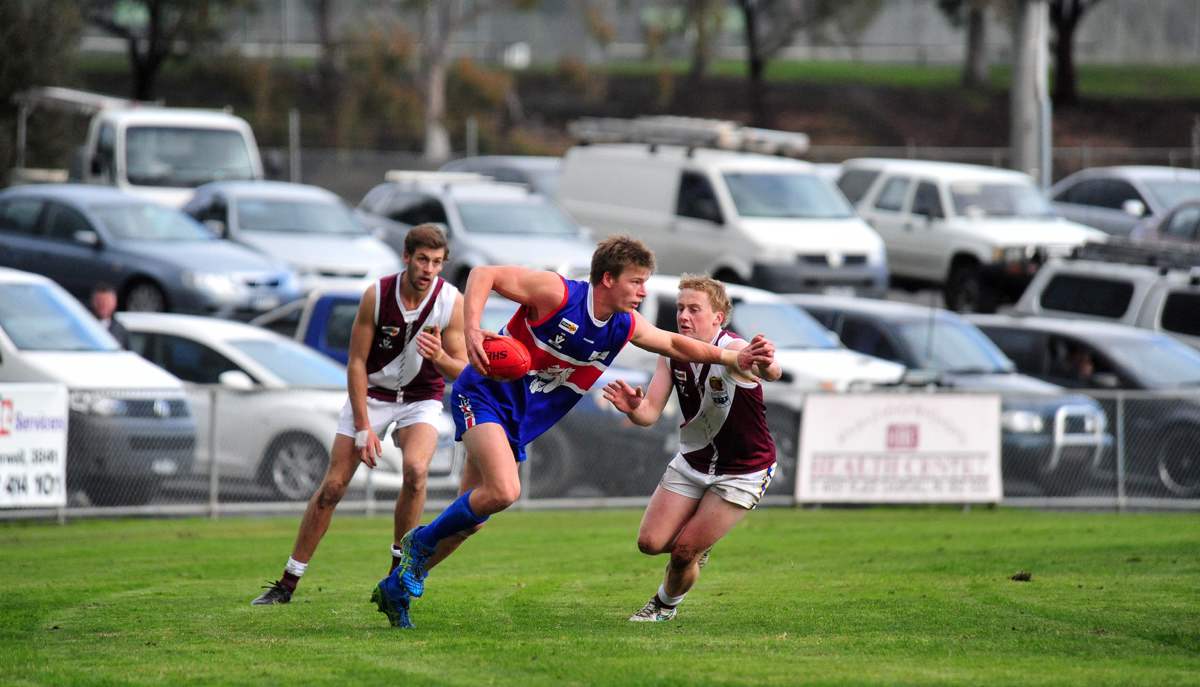 CHURCHILL and gruelling conditions conspired to bring Sale City’s unbeaten run to an end in round 12 of North Gippsland Football Netball League competition on Saturday.

With Gaskin Park already heavy under foot from recent rain, a half-time downpour ensured the second half was a battle of attrition.

Churchill coach Allan Chandler was pleased with the way his players responded under pressure.

“The ball was more than 50 per cent in their forward half in the last quarter and the last 10 minutes especially we tried to batten down the hatches and stop them from scoring,” Chandler said.

“We had to battle for four quarters and it gives us a bit of confidence and belief.

“It was nice to redeem ourselves after last week’s loss to Heyfield and being the first side to knock off Sale City is a feather in our cap as well.”

Sale City shaded a tightly-contested first half, in which both sides registered 11 scoring shots, but scoring dried up after the main break, with the Bulldogs only managing one goal to the home side’s three.

Midfielders Chris Williams (two goals) and Travis Brighton shone for the Cougars, while Jarrod Broadbent and Jordan Fenech held firm in defence – the latter holding Jacob Schuback to one goal.

Matt Lutze got through his return from long-term injury unscathed, while coach David Piasente got another game under his belt after a two-month layoff.

Piasente conceded his side was second best on the day.

“Watching the reserves you could tell it was going to be one of those days when you try not to go too wide, come through the corridor and limit possessions,” Piasente said.

“We didn’t make the most of our opportunities and gave away some early goals from our kick-outs, but we while we lost we didn’t raise the white flag. The attitude and effort we showed was still good.”

Piasente would happily have continued winning, but said defeat showed the health of the current competition.

The Bulldogs remain two games clear of Churchill and Woodside at the top of the ladder.

Heyfield moved ahead of Yarram with a narrow win at Gordon St Reserve.

On a day when both clubs paid their respects to Indigenous culture, it was the Kangaroos that got the job done on the scoreboard, winning 8.7 (55) to 5.12 (42).

Rosedale kept its finals hopes alive with a much-needed 24-point win against Cowwarr.

Pat Tainsh and Simon Ferguson and stood tall for the Saints and Vincent Johnston and Brad McBride finished with three goals each.

A blistering final term led Traralgon-Tyers United to a 39-point win against Glengarry.

Gormandale Recreation Reserve played host to another goal-fest, as the home side continued its attack-first approach against Woodside.

Adrian Fazioli (seven goals) and Rob Michaelides (five) did the damage, with Tom Glenn, Aidan Fitzgerald and Cameron Whiteoak (four goals) among the other standouts for Woodside.

Joseph Colaciello starred with five goals for the Tigers, who were well served by Matt Griffiths, Luke Francis and Sam Marks.

Glengarry moved one game clear inside the top five on the North Gippsland Football Netball League A-grade netball ladder, with a 51-28 win against Traralgon-Tyers United.