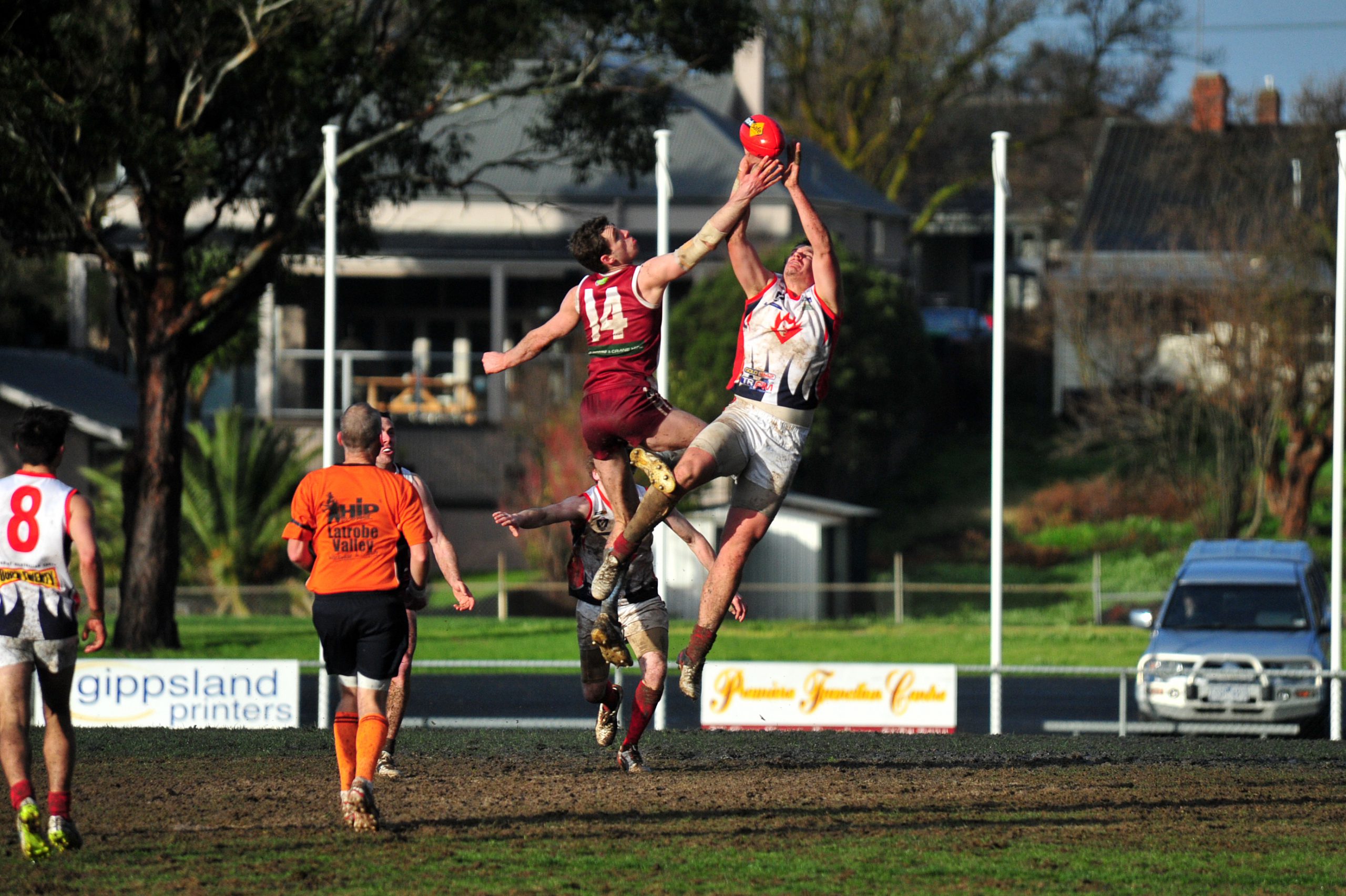 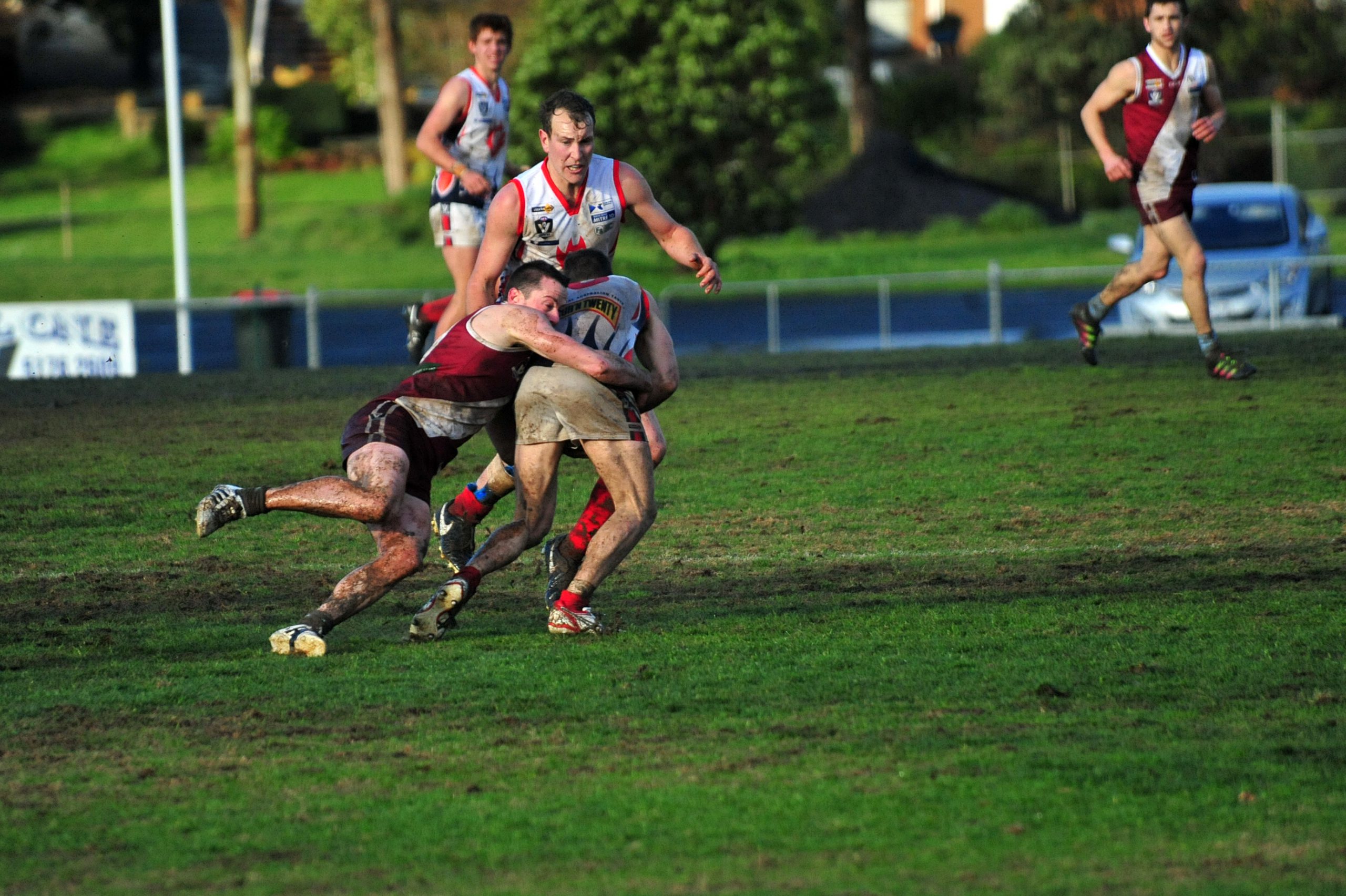 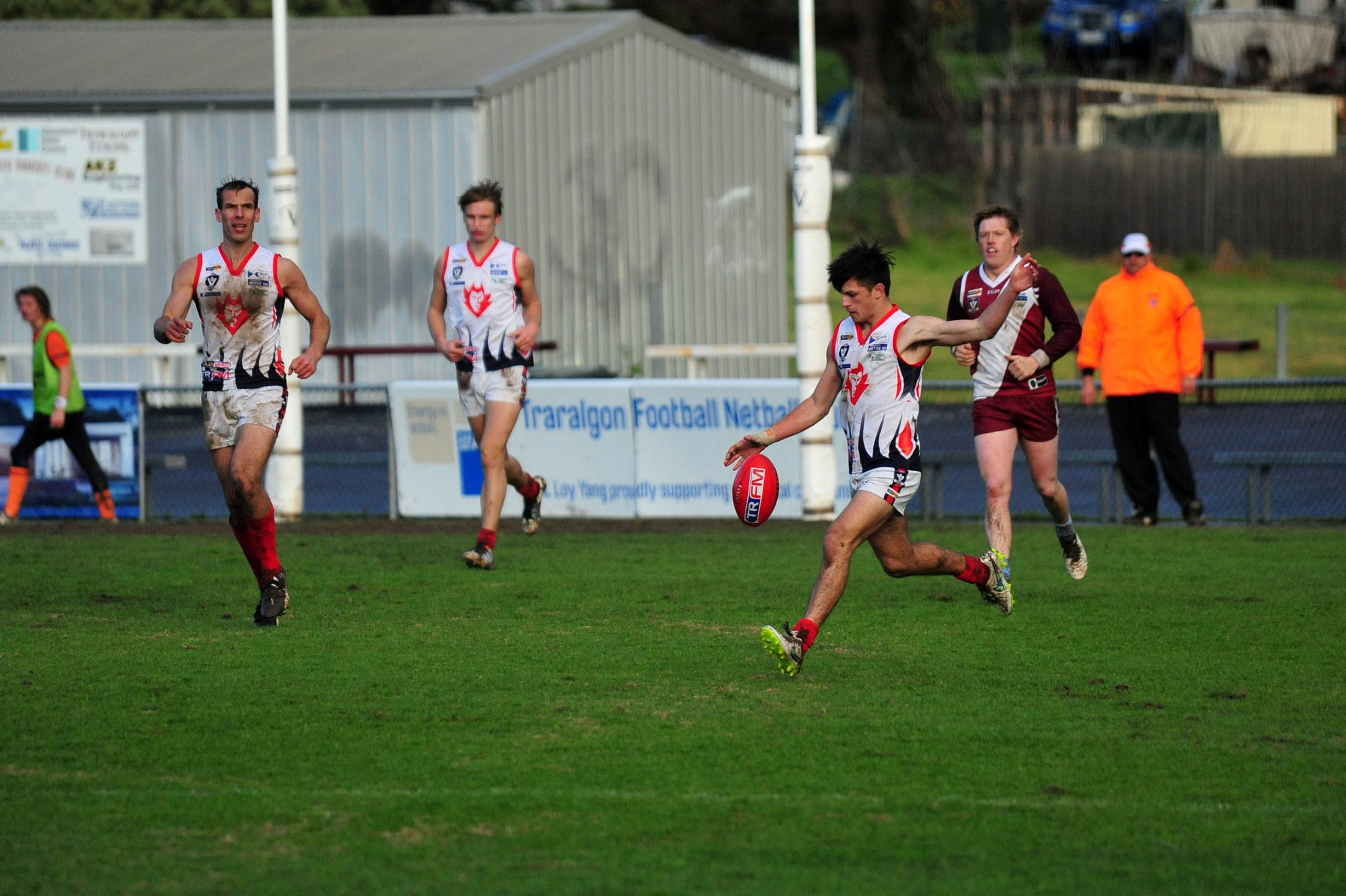 RECORDS and rain tumbled in equal measure in round 14 of the Gippsland League on Saturday, as wet weather conspired to create history around the grounds.

The record breaking feats were far from glamorous as a slew of lowest team totals and aggregate scores between clubs emerged as the dominant theme.

Two sides, Traralgon and Leongatha, bucked the trend by posting tallies in the 70s, while no other side broke the 40-point mark in four quarters of football.

The Maroons marched to an early lead of 20 points by quarter-time and managed to keep the Redlegs scoreless for the following two terms.

Remarkably Bairnsdale’s return of four minor scores was not its worst effort in competition history, coming in at second to its 0.2 (2) against the same opposition in 1998.

Premiership coach Mark Collison said it was a good return to form after being humbled by the Magpies.

“They (Sale) played well, I’m not taking too much away from them, we just want to get better,” he said.

“It (this week) was a big win, the boys played well so I was really happy with the effort.

“Teamwork and the effort and defensive work was really good. We kept them to three behinds for the first quarter then after that they took one more behind, so that was a pretty good effort really.”

Traralgon took the opportunity to test players in unfamiliar positions and discovered some new avenues to goal in the process.

Defensive lynchpin Collison bagged a double, as did Matt Northe, with the likes of Mick Stockdale and Mick Burge also chiming in.

The league’s second leading goal scorer, Lee Stockdale, did not add to his tally and played a different role on Saturday.

“We don’t rely on anyone; Lee Stockdale, one of our leading goal scorers, did a job in the midfield and down back, we mixed it right up. We rely on teamwork not individuals,” Collison said.

The win keeps Traralgon nestled safely in third, still six points behind Maffra but eight clear of Warragul in fourth.

MAFFRA claimed the spoils against Morwell in a match which yielded the lowest aggregate score between the two clubs in league history.

The result became the third lowest aggregate in league history, three points shy of Traralgon’s 39 point grand final victory over Morwell back in 1991.

Morwell’s return of 12 points was its worst effort against Maffra, overturning its 3.2 (20) in 2004, while the Eagles posted their lowest ever winning score in this competition.

Despite managing a single major, to Dan Musil, for the afternoon the Tigers were right in the match all day.

They trailed by one straight kick at half-time and were 12 points adrift at the final change, but forward entries were seldom and shots on goal rarer still.

The loss keeps Morwell at the bottom of the ladder, two points shy of Bairnsdale.

DROUIN drew within two points of the top five after an important 15-point win over Moe at Drouin.

The return was Moe’s worst against the Hawks in this competition and came more than half a century since its previous low of 5.8 (38) in 1962.

Drouin had Moe at arm’s length throughout the contest.

The Hawks booted two in the first to set up a 14-point lead, which the Lions reduced to eight by half-time with a goal of their own in the second term.

Drouin’s 3.3 (21) in the third was always going to be tough to match in a low-scoring scrap, and while the Lions kept the host scoreless in the fourth they could not bridge the gap.

It was a huge blow to Moe’s finals hopes with eight points now the difference to fifth spot, while a win would have closed the gap to a single game.

In another inauspicious record breaking match Wonthaggi posted its lowest total against Warragul in the lowest aggregate score between the two sides.

The sides traded behinds in a goalless third term before Warragul snuck through one more major in the last to secure all four points.

Both sides are locked on 28 competition points in fourth and fifth with Warragul ahead by less than one per cent on differential.

SALE registered its poorest score against Leongatha in a 53-point loss to the ladder leader.

It was game on in the first quarter as both sides slotted 2.1 (13) to be even at the break.

Leongatha turned the screw with a couple of majors in the second, then hammered it home with five in the third to set up a comfortable win.