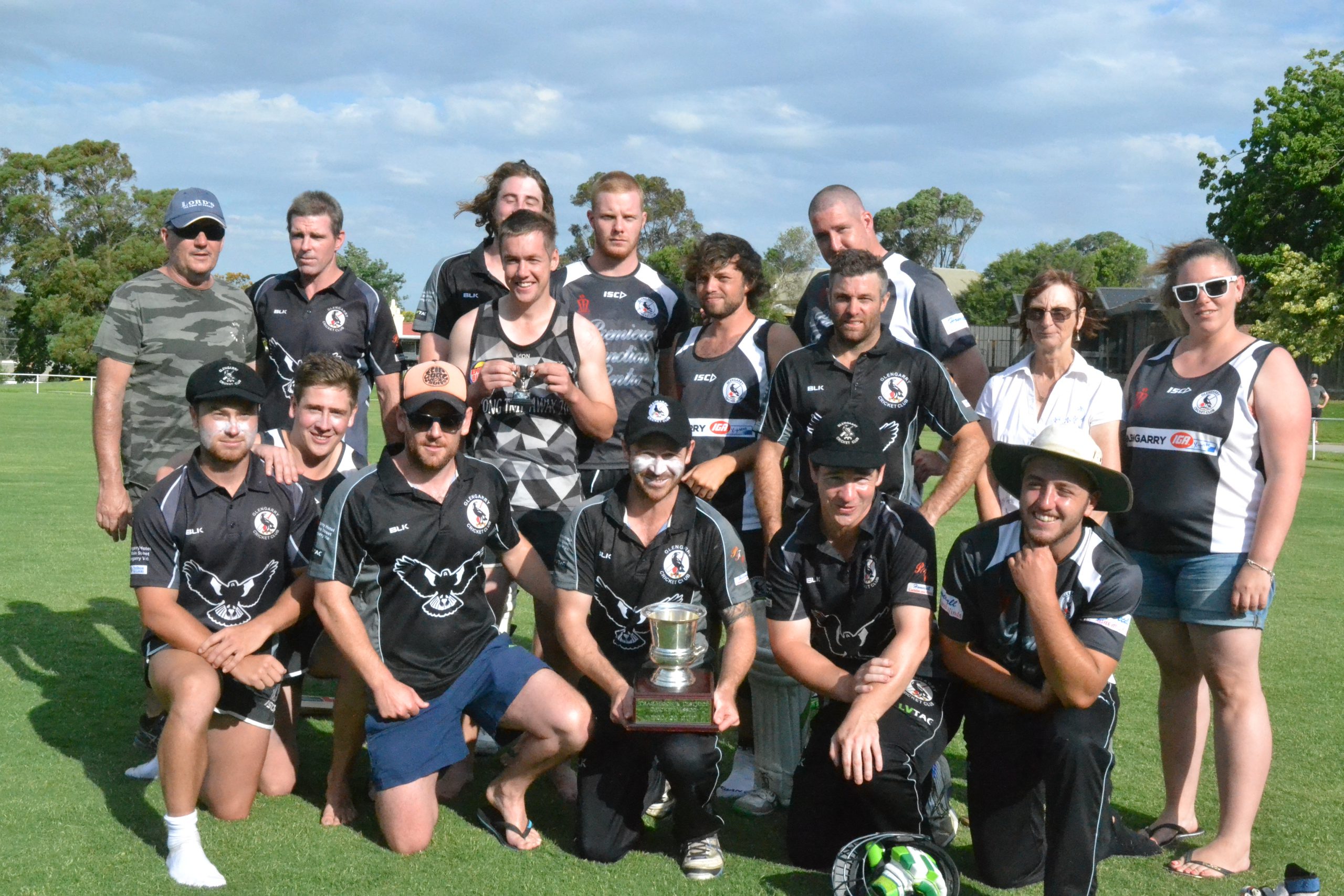 Glengarry has been crowned the inaugural T20 Tonk champion after turning in a dominant display with bat and ball to defeat in yesterday’s grand final at Duncan Cameron Park.

The Sharks batted first but struggled to make the most of a good pitch as the Magpies looked to constrict their opponents with tight bowling and energetic fielding.

Twenty20 may be synonymous with big hitting but that didn’t stop Cam Graham removing Paul Richards with the fourth ball of the day, as he sent down a wicket maiden.

It was not long later before Richards struck again to remove Mitch Membrey after he struck the first six of the day.

New pair James Pryde and Rick Battista kept the score ticking along with the odd six or boundary but were never able to completely break free as many cleanly hit shots found their way to fielders.

Pryde was dismissed by Adam Brady in the eighth over with the score at 3/42 and the Sharks scoring at 5.4 an over.

Battista carried on as wickets continued to fall before he was run out for 37 in a knock that contained two fours and two sixes.

When Robert Voss was dismissed for three in the same over were reeling at 7/65.

Needing a hero, the Sharks found two in Michael Warne (27) and Sam Farmer (25 not out) with the pair eluding the fielders and finding the boundary in a way their teammates could not.

With a strong breeze blowing across the ground during the innings, Glengarry captain Sam Marks said his team was aiming to get hitting against the wind.

Another key factor in the Magpies’ ability to strike early on was their experience to build pressure by limiting their opponent’s opportunities to score, something the skipper acknowledged.

“We sort of swooped and once we got a couple of early wickets we tried to tie them down and we did,” Sam Marks said.

“But Twenty20 is a game of momentum – it can change in one over.

Frank Marks and Kent Hammond opened for Glengarry and after taking the first over to get themselves set they soon set about stamping their authority on the game.

Andrew Matthews could only watch as Frank Marks dispatched his first ball to the boundary before the last ball of the over went flying over the fence.

He went on to club three sixes and four boundaries on his way to 45 when he miscued one off Sam Farmer and sent it straight up in the air.

When Frank Marks departed the Magpies were in the box seat, with the score 1/63 off 8.3 overs.

Alistair then combined with Hammond to chase down the runs.

With Glengarry well ahead of the required run-rate the pair toned down the big hitting approach and instead concentrated on eliminating risk by moving the ball along the ground.

The pair overhauled ‘ total in the 18th, with Hammond finishing 35 not out and 33 not out.

Sam Marks said he was pleased with the way the two went about chasing down the total.

“In the past being a young side and a lot of stuff like that a lot of blokes would see the opportunity and just hit boundaries and get it over and done with,” he said.

“This year, in particular in this comp… if someone’s got going the bloke up the other end has been great just rotating the strike and getting him on strike.

“Hopefully we continue that into the season.”

After the match, Frank Marks was named of the grand final.

“If he’s in and he gets in… he’s probably the most explosive batsman in the comp,” Sam Marks said.

“He hits all areas of the ground and I’ve just seen some of his innings over the year, I’d like to see him do it more often.

“When he’s going there’s no one who hits a cleaner ball.”

With regular Sharks captain Lee Stockdale unavailable it was up to James Pryde to take the reins.

The skipper said his team was hurt by the loss of so many early wickets.

“After we had a few unavailable batters and we didn’t bat that deep,” Pryde said.

“We were just battling for the rest of the innings.

“I thought 120 was probably never going to be enough but I thought we gave it a good go.”