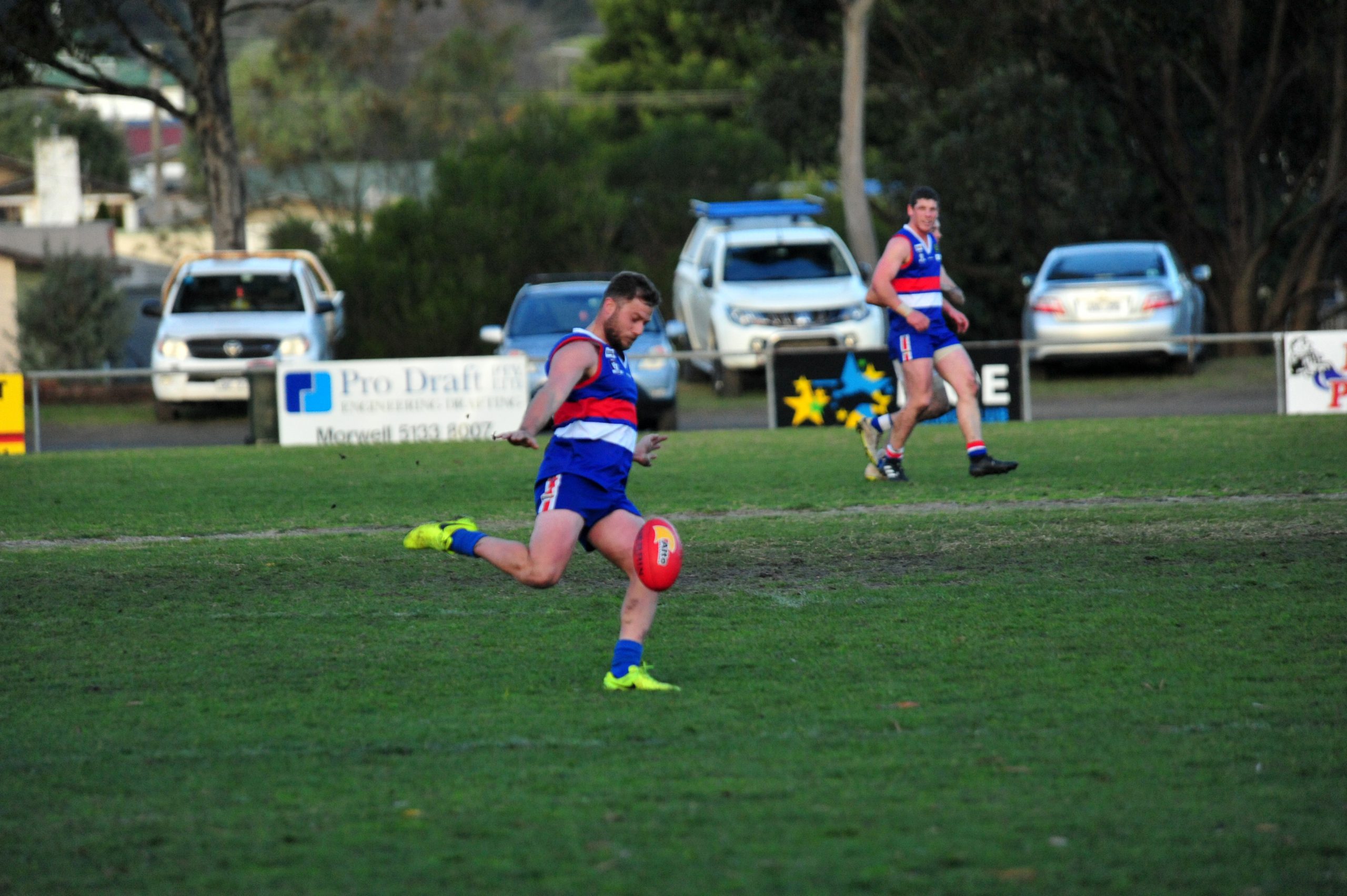 Thorpdale emerged victorious in its heavyweight battle against Newborough on Saturday, downing the Dogs by 13 points on their home turf.

The victory means the Blues leapfrog Newborough into third place on the ladder, with the Bulldogs sitting fourth.

Both teams are on 32 points with only percentage separating them.

Thorpdale coach Nick Brown said he was delighted with the performance.

“We’ve had a couple of tough losses over the past few weeks so it feels really good to bounce back by playing good footy,” Brown said.

“Newborough are a really good side and when you come up against them you know you’re going to get a great game of footy.

“You’ve got to play a good four full quarters to beat them and we managed to do that today.”

Both teams played some closely contested football in their round 11 Mid Gippsland Football League clash, but Newborough was forced to pay for failing to convert its opportunities up front.

The Blues came out meaning business in the first quarter with Tim Loft scoring the first goal, as Michael Gelagotis kicked the first major for the home team as the Dogs started getting forward.

The Blues moved the ball around quickly and kept up the pressure, kicking three goals in the first 10 minutes to take the lead.

It fell to Joshua Whittaker to score Newborough’s first of the second term when he converted a 50 metre penalty.

Matthew Powell scored early in the third term to get Thorpdale off to a strong start, followed by Josh Collie and Jake Atkinson to take the lead to 33 points.

The Bulldogs responded by moving the ball quicker to get themselves back in the contest and by the final break, Thorpdale led 9.3 (57) to 6.8 (44).

Both teams got good possession in the final term and it fell to Gelagotis to score Newborough’s first of the term.

Newborough coach Dean Caldow said he was disappointed with the performance.

“We had the majority of the play, more scoring shots, more inside 50’s and more centre clearances and we just can’t win the game,” Caldow said.

“It’s highlighted the areas where we are falling down. We had lots of shots at goal that we should have got and we need to keep that scoring pressure on the opposition which we failed to do today.”

Trafalgar played some better football during the second quarter but Mirboo North converted the majority of their opportunities to lead 9.4 (58) to 4.2 (26) at the main break.

Mirboo North kept up the pressure during the second half of the game and restricted the Bloods to a solitary behind in the final term.

Dwayne Gunn was top goal scorer for Mirboo North with four and Benjamin Doran for Trafalgar with three.

Yarragon managed a 26-point victory over Boolarra in a low-scoring match-up.

The scores could have been worse with Yarragon missing 15 chances at goal.

Best on ground for the Panthers was Paul Harvey with Brendan Patrick Smith picking up the honours for Boolarra.

The result leaves Yarragon in ninth place on the ladder with Boolarra in last place.

Whatever Magpies coach Jamie Aitken said at half time had an impact, as Yinnar came out to dominate the second half.

Yinnar came back with many missed opportunities to lead by seven points at the end of the third term with the Hills men only getting two chances at goal.

The Magpies scored five goals to Hill End’s one in the fourth quarter to secure victory.

Mitch Renwick scored four for Yinnar and Ben Rotheram and Michael Santo scored two each for the Hillmen.

Yallourn/Yallourn North is still in second place after defeating Morwell East in a back-and-forth encounter at Ronald Reserve.

An evenly-matched third quarter meant Morwell East’s lead had shrunk to six points by the end of the third term.

Frank Marks was best on for Morwell East and Adam Bailey took best for the Bombers.

Tim Phillips and Dean Macdonald kicked three each for YYN, while Lucas Towns and Lachlan White bagged two each for the Hawks.