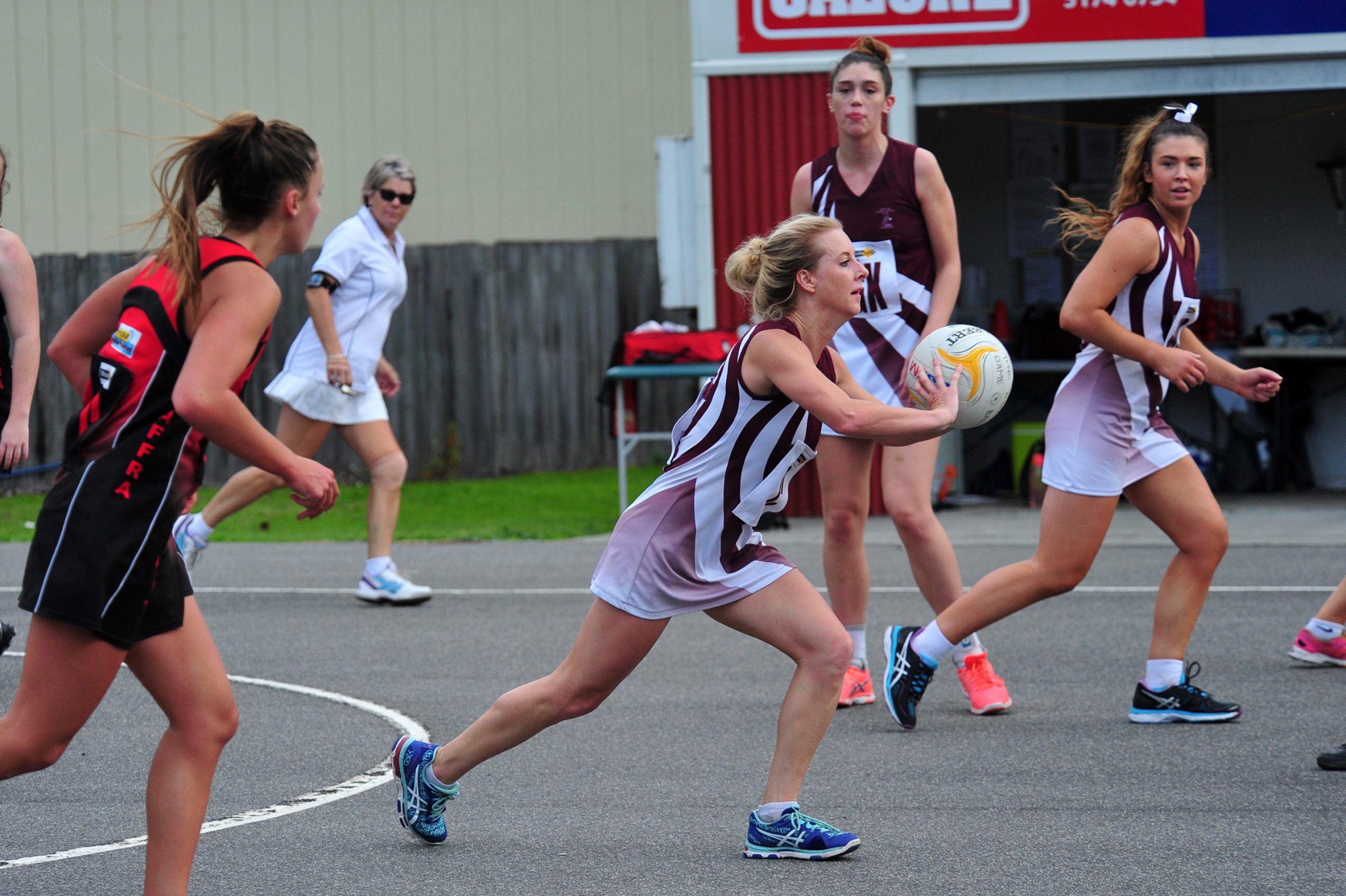 Traralgon remains the minor premiership favourite following a 20-goal win over Moe at home on Saturday, 64-44.

The Maroons led at quarter-time by one and by two goals at half time before a blowout the way of Traralgon in the third term.

Traralgon A grade coach Kate French said it was pleasing her team came away with the win, crediting the Lions for their competitive performance.

“They’re a quality side. Overall it was a team effort because we maintained our composure and consistency and were able to capitalise on most of our turnovers,” French said.

“From our perspective, it was good to have a tough challenge which is a credit to Moe because it’s taught us a lot about areas we can improve on.”

Maddi Stockdale shot accurately for the Maroons in goal attack while Stacey O’Brien took the game on consistently in defence.

Moe A grade coach Vicki Van Gelderen complimented her side, attributing the loss to a poor third quarter performance where the Maroons shot 18 goals more than the Lions.

“Montana Holmes played centre, her pace and game dictation throughout the centre court was spot on,” Van Gelderen said.

“Georgia Moody was accurate at goal attack, she would’ve easily been at 90 per cent while Shannon Freeman had a huge task on six-foot-four Taylin Gourley, getting her hands on a lot of intercepts.”

The loss puts Moe fifth on the ladder with six wins and five losses.

In round 12, Moe hosts Leongatha while Traralgon hosts Sale.

Morwell was too good for Warragul on the road, downing the Gulls by 20 points at Western Park on Saturday, 69-49.

Tigers’ goal attack Claire Allison shot an impressive 53 goals from 54 attempts, following a slow start by the team in the first term.

Casey Sherriff played with class across wing defence while Sam Pearce provided strength in the mid-court, before moving into goal defence after an ill Courtney Garth came off early in the third.

The win keeps Morwell in third place with eight wins, two losses and a draw, while Warragul sits seventh with four and three.

Warragul A grade coach Lexie Riley said she was “optimistic” about the win following a 40-goal loss to the Tigers earlier in the season.

“We hadn’t won a game in five years up until round one this year, so to have a turn-around and play competitively against Morwell was pleasing,” Riley said.

“I think they were shocked at quarter-time, they weren’t expecting us to play that well.

“The margin increased after each break but it was a clean game, it was really nice to play with a competitive team and not tit-for-tat.”

Alex Cole received a notable mention for her work on Casey Sherriff across the mid-court, named best on for the Gulls while goalers Anna Green and Jamie Rollison shot “extremely accurately”, Riley said.

Morwell hosts Maffra in round 12 while Warragul takes on Bairnsdale at Western Park.

Maffra and Bairnsdale squared-off in a close-fought battle that almost went down to the wire with the Redlegs securing a six goal win, 48-42.

The Eagles led at every break, with an eight-goal lead into quarter time and outscoring the Redlegs by four in the second.

Maffra A grade coach Di Jolly said that even though the team relied on support from three under 17s, the girls were able to secure the win and “get the game over the line”.

“It was a tight match,” Jolly said.

“Layla Berry injured her ankle at the end of the third quarter and had sit out for the rest of the game.

“We had to get one of our girls off the bench from B grade, Natalie Allman, to come in and play goal shooter for the last quarter.”

Coco Henry shot 31 of 48 goals for the Eagles, while 17 year-old Emma Allman received a mention for her work across the court.

The win puts Maffra at sixth on the ladder with four wins and seven losses while Bairnsdale sit 10th with one and 10.

The Redlegs head to Warragul this Saturday while the Eagles hit the road to Morwell.

Leongatha secured its seventh win for the season following an expected win over eighth-placed Wonthaggi at home, 61-43.

The Power linger down the bottom of the ladder with three wins and eight losses following a poor start to the season.

“The first half was quite close but in the second half we managed to put our experience to the test and draw the game out to a 10-goal lead at three-quarter time,” Leongatha A grade coach Laura Higgins said.

“The accurate goal shooting was really what won the game in the end.

“It was pretty fast-paced, there was an average age of about 19 between the two teams so it made for a pretty fit contest.”

Hannah Flanders was named best on court for her work in goal attack for the Parrots, only missing three goals for the game, while Shannon Dankert was acknowledged for her strong leads and smart passes in wing attack.

Leongatha sits fourth on the ladder while Wonthaggi sits eight with three wins and eight losses.

This weekend the Power host Drouin while Leongatha hit the road to Moe.

The final Gippsland League game was a result many would have expected as second-placed Drouin walked away 58 goal winners over Sale, 92-34.

The result was Drouin’s ninth win for the season, positioning the Hawks eight points behind ladder leaders Traralgon.

Sale has only won one game this season, in a year that’s been less than impressive for the Magpies.

In round 13, Drouin travels to Wonthaggi while Sale head up the highway to Traralgon.