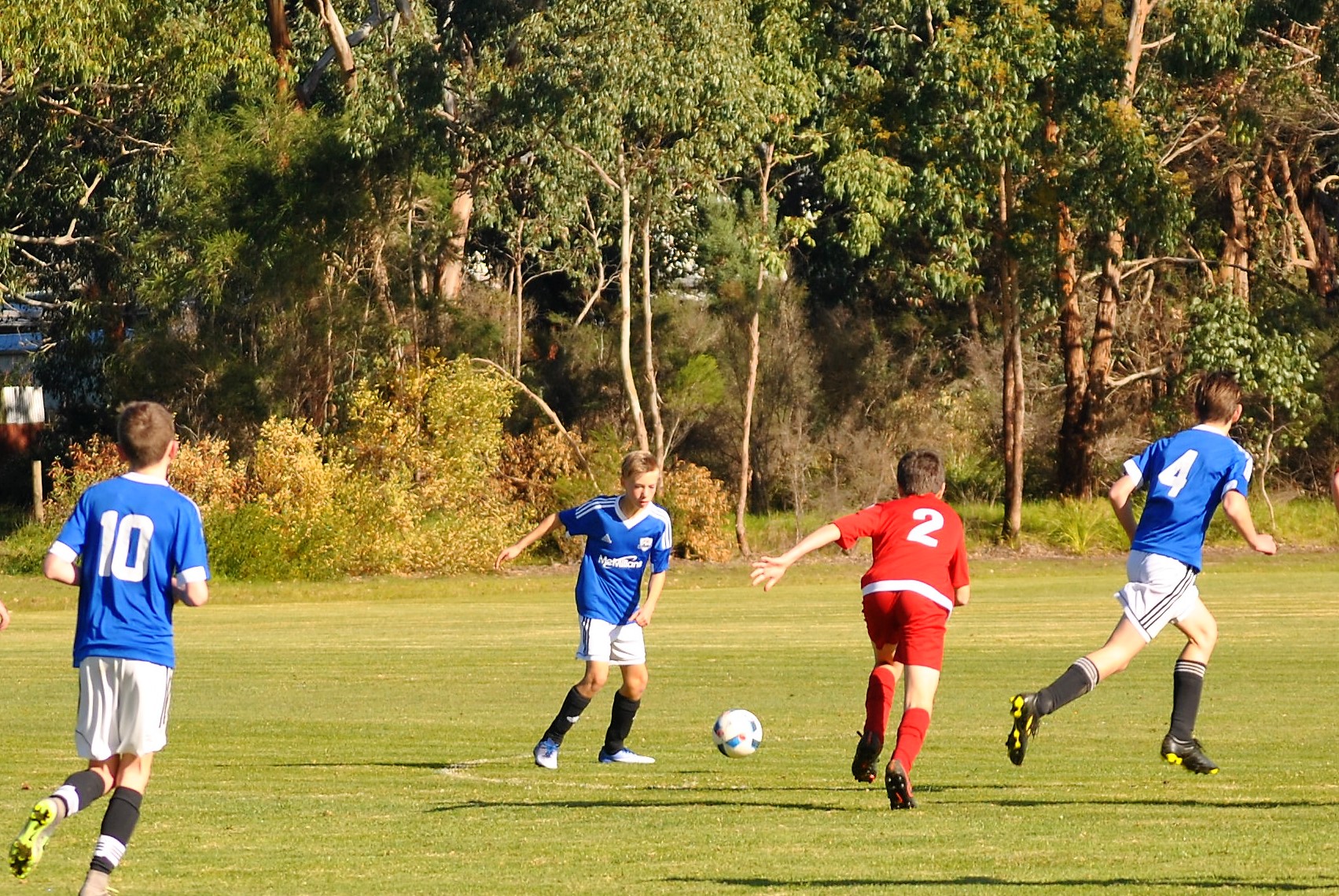 With the under 15 squad away at the Kanga Cup tournament in Canberra, Gippsland FC hosted the first of two games at their second home at Thompson Reserve, Inverloch in Round 10 of State League Division 1 South.

The under 14s and 13s both squared off against Brighton in what were two tightly-contested matches.

The under 14s were hoping to back up from their win the previous round against a Brighton outfit which had previously caused trouble for teams higher up the ladder.

This game proved to be no different.

After a couple of brief passing spells, Brighton broke the deadlock in only the third minute after some sloppy play left the opposing team’s most dangerous player unmarked with only the keeper to beat.

The early goal shocked Gippsland into gear and they returned fire almost instantly.

Kishen Parekh cooly slotted the ball past the keeper after a fast break to equalise.

Gippsland then started to control the game, with some great passing and movement not rewarding them on the scoreboard.

At the 25 minute mark, the Brighton boys won a corner which was sent into a dangerous area, bouncing off one or two players before falling to an opposition player who hit the ball home.

Straight off the kick-off, the Gippslanders attacked and were again rewarded with a fine goal scored by Manny Scarlett to level the game at the interval.

After half time, Gippsland continued to pile on the pressure, but were left with a huge task after Brighton won a penalty.

With Brighton looking to score, goalkeeper Ethan Farrell had other ideas and pulled off a fantastic save to deny the visitors the lead.

Both teams continued to attack and in the 51st minute a beautiful cross field pass from Julian Colantuono found the run of Parekh, who rounded the keeper to put the home side in front.

Some great goalkeeping from both sides ensured the scores did not change and the under 14s recorded a great comeback win, 3-2.

Having won their last three games on the trot, the under 13 boys were left shell-shocked after conceding two untidy goals in the opening minutes against Brighton.

Regaining some composure, Gippsland began to play its quick passing game, getting its pacey wingers involved.

Tana Betera continued in his rich vein of form by finishing a rebound after a strong build up down the left hand side.

With plenty left to take from the game, Gippsland went into the sheds 2-1 down at halftime.

The second half began in similar fashion to the first, Brighton starting off hungrier resulting in another goal to go 3-1 up.

From there it was the Gippsland outfit which took control of the game.

First Julian Colantuono scoring to close the gap back down to one goal and then Joe Stewart hit an absolute piledriver into the top corner to send the crowd into rapture.

With less than a minute remaining and totally against the run of play, Brighton produced a fast break of their own and finished truly to take the lead and crush the Gippsland boys spirits.

Next week the teams are off for school holidays, but will be back in action the following week away from home.

Gippsland FC will instead focus all of its attention on its future stars as the boys and girls from the Skills Development Program (SAP) travel to Darebin to showcase their talents.