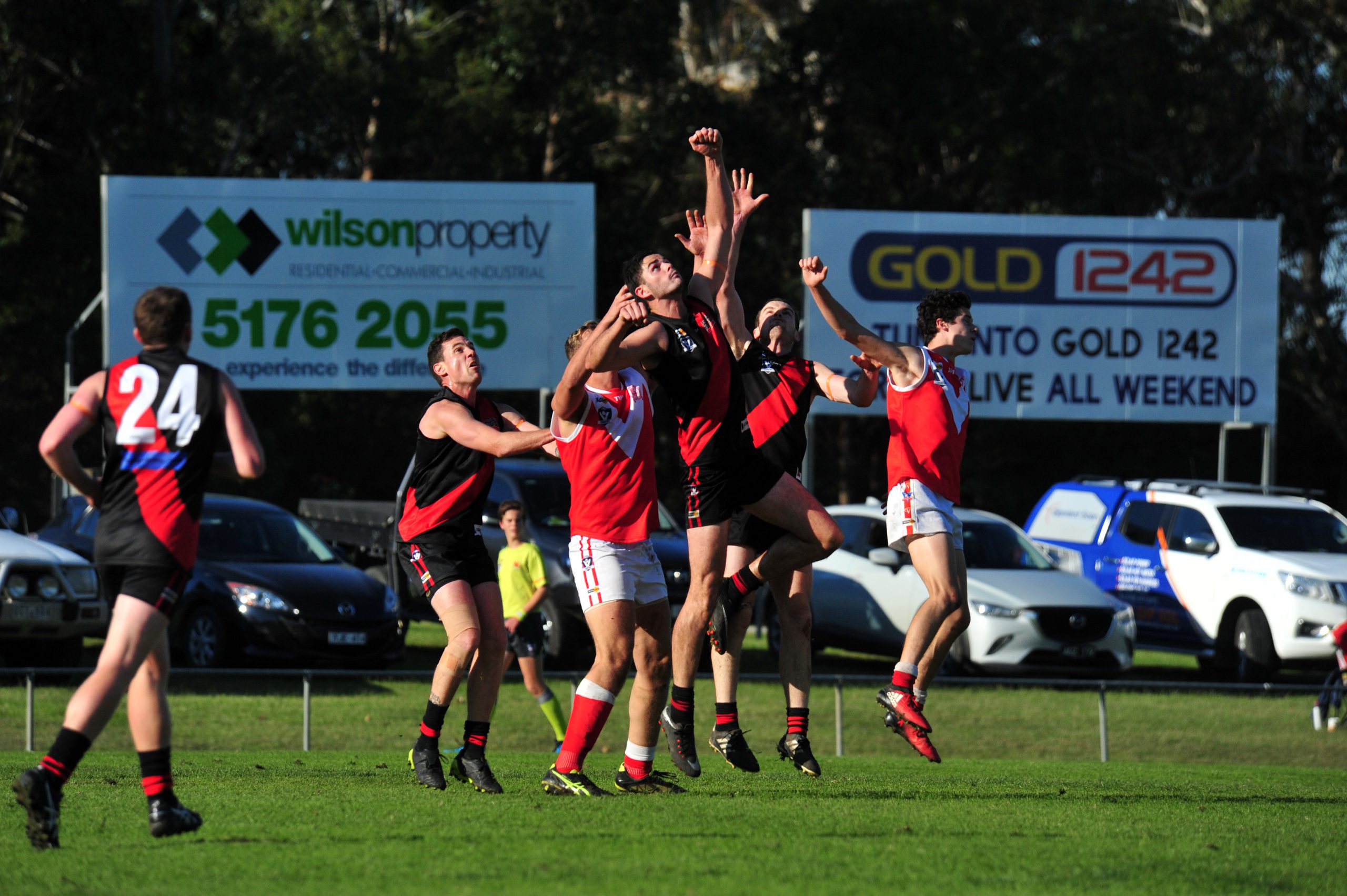 The fight for top spot on the North Gippsland ladder could come to a head this weekend as Yarram hosts Sale City in a top-of-the-table clash in round 13.

Both teams, along with Heyfield, sit equal on points, separated only by percentage, and will look to jump ahead and secure the four points.

Following a nail biting one-point defeat to Churchill last round, Traralgon Tyers United will look redeem itself against Rosedale on the road while Heyfield take on Glengarry in what could be a one-sided contest in favour of the Kangaroos.

For Yarram, Saturday will be a special day for the club as it hosts its 10-year reunion of its 2007 premiership side.

Yarram coach Chris Pettit said the clash was a “must win” contest with past players and members travelling from across Australia to attend the reunion.

“We need to be our best, we can’t have a game where we only play in patches, Sale City are the best side in the competition when they have a full side,” Pettit said.

“We don’t focus on the opposition too much, but if we can play one-on-one and get our pressure right, we should be able to push them for the four quarters.”

Yarram and Sale City have had similar form this year, both registering 10 wins and two losses.

The last time these two teams met was in round four, when the Bulldogs secured a two-goal win over the Demons.

Sale City coach David Piasente said the game was going to be a “tough one” following his side’s 188-point win over Gormandale in round 12.

“There’s going to be a lot contested ball and we’ll have to make sure our fast ball movement is spot on, it’s critical to get that right when playing this side,” Piasente said.

“We have to have a full range of contributors, not just one or two key players.

“They are a quality team, and can stand up when they need too.”

Irrespective of the who wins, one team will finish ahead the other with the winner likely equal on points with Heyfield, should the Kangaroos secure a win over Glengarry on Saturday.

After trailing all game against Traralgon Tyers United in round 12, Churchill received a 50 metre penalty moments before the final siren, allowing Brayden Kokshoorn to kick the game-winning goal from the top of the square.

The controversial decision to award a 50 metre penalty after a TTU player encroached a free kick allowed the Cougars to table their seventh win for the season.

But Churchill Brendan Holt said his side would have to “pull up their socks” on Saturday following a “sloppy performance” against the Bombers last weekend.

“We ‘ll need to play a whole lot better if we want to get over the line,” Holt said.

“We can’t take them lightly, we have to roll up our sleeves and work on getting first possession and accurate ball control, particularly when hitting targets,” Holt said.

The Saints sit sixth on the ladder with six wins and six losses, including a 22 point loss to the Cougars in round four.

Cowwarr coach Brett McMaster said he was confident his side could perform well against Churchill.

“We were pretty competitive against them last time we played the Cougars. But they ran away in the end and bet us about four goals,” McMaster said.

“If we bring the effort we did on Saturday (against Glengarry), we will have no problems winning the game.”

The game is a must-win contest for the Cougars, who sit fourth on the ladder, but 12 points behind third-placed Heyfield.

Heyfield is one of three teams who remain equal on points, but separated by percentage, at the top of the North Gippsland ladder.

But not all is rosy for the he Kangaroos following an “abysmal” first-half performance against Rosedale last week, according to Heyfield coach Josh Stubbe.

The third-placed Kangaroos trailed at quarter-time and again at the main break before applying pressure to secure the lead into the final term against the ninth-placed Blues.

“Our skill level needs to be addressed, to ensure plenty of touch in this game, we need to come out and play our kind of footy and execute them on the field… not like we did last week,” Stubbe said.

“We’re going to focus on delivery to the forward line at training and cleanliness with the ball at ground level after a pretty average performance with a few blokes fumbling it against Rosedale.”

Glengarry will look to recover following a 40-point loss to Cowwarr on Saturday, its seventh loss for the season including a 58-point hiding by the Kangaroos in round four.

“We’ll be focusing on skill work this week, if we can be more accurate with our use of ball we will have more of a chance,” Glengarry coach Chris Day said.

“Handballs, defensive work and our ball use under pressure is what we need to improve on.”

Glengarry remains seventh on the ladder while Heyfield sits third, looking at the likeliness of moving up to second or first should they get the win over the Magpies.

Traralgon Tyers United will be as hungry as ever following a one point loss to Churchill last weekend.

The Bombers sit eighth with three wins and nine losses, one spot ahead of Rosedale with two and 10.

TTU coach Nick Turnbull said Rosedale would pose a “real threat” to the Bombers this week.

“Even though Rosedale have only won two games, they’re going to be a lot of competition for us this round,” Turnbull said.

“We’ve got to be very aware of Dale Fleming, and Brad Caldwell who kicked five goals against Heyfield last week… they could be a dangerous side.”

If history is anything to go by, Rosedale should be cautious following a 53-point loss to the Bombers in round four.

“Last time TTU really pulled our pants down, we’ll be trying to hold onto the footy and keep their scoring opportunities to a minimum,” Rosedale coach Sam Bristow said.

“Keeping it simple will be our theme for the rest of the year.”

Sam Tudor is expected to miss about three weeks for the Blues following a hamstring injury incurred during the game against Heyfield last round.

Woodside will be a player down against Gormandale this week following a concussion that left Sam Hogan unconscious during Saturday’s game against Yarram.

The incident, alleged to have come from an elbow to the head, saw Hogan knocked out coach Gary Jones said, stopping on-field play for more than 20 minutes in the second quarter before Hogan was transported to hospital.

But Jones said the club had “another big game” on its hands this weekend.

“We were poor with our disposals under pressure on Saturday, so our drills at training will centre around the boys looking at pressure behind the ball and hitting their targets,” Jones said.

“We turned over the ball a lot, we only had six less scoring shots, but when you look at those shots and realise we lost by 10 goals, you can imagine how close the score should have been.”

Woodside sits fifth on the ladder, equal on points with Churchill at fourth, while Gormandale continue to prop the ladder up, yet to win a game.

The Tigers will be hoping for a closer performance following a 99-point loss to the Wildcats in round four.

“We’re going to try and be as competitive as we can, we have about eight blokes unavailable for selection due to injury,” Gormandale coach Steve Hazelman said.

“We have set some small targets, in terms of targets and tackles, trying to keep things as simple as we can without complicating the process.”