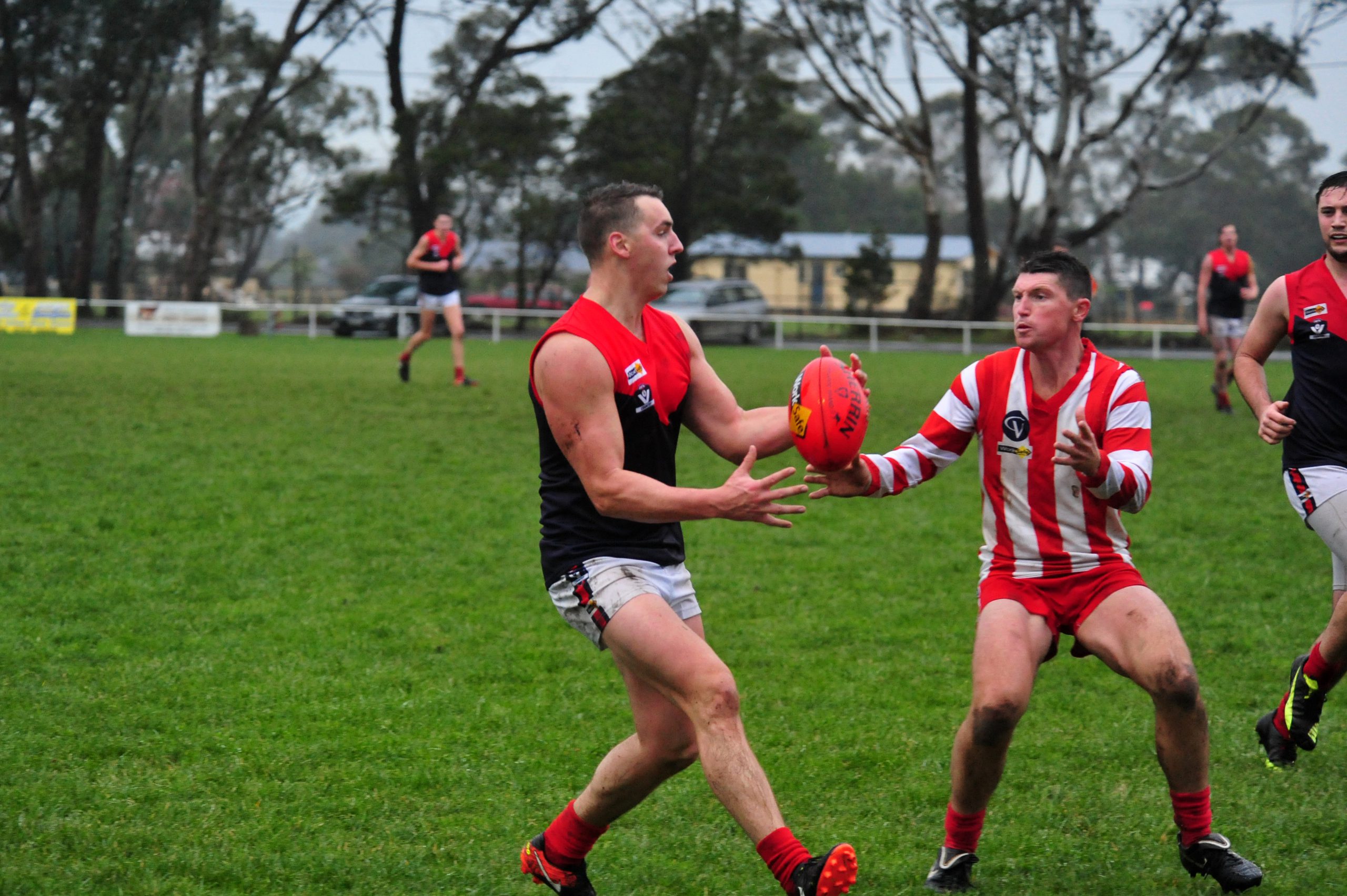 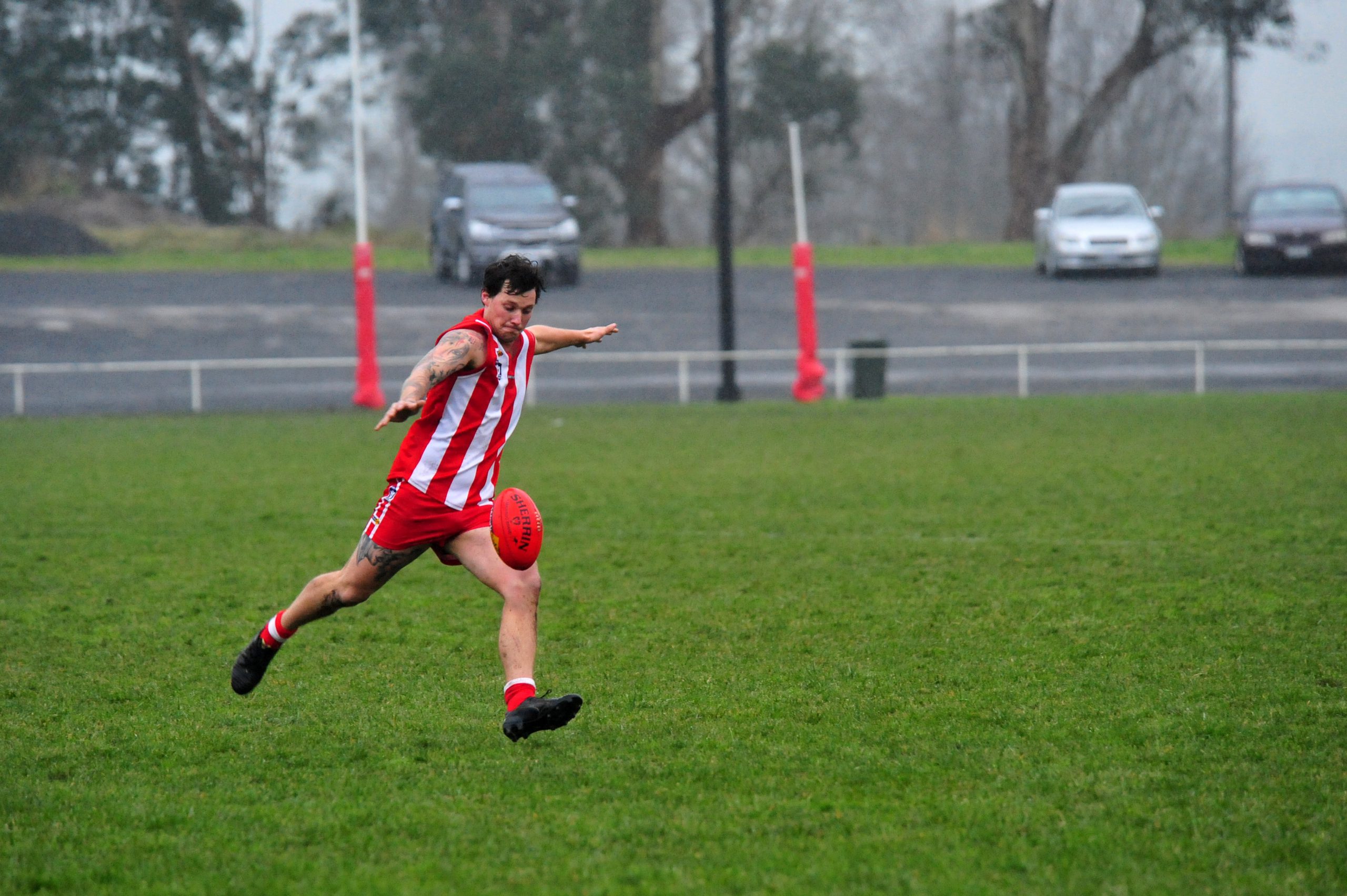 Things are heating up in Mid Gippsland football with just five rounds remaining in the regular season with four teams neck-and-neck in the race for a senior finals’ berth.

Mirboo North (third), Trafalgar (fourth), Thorpdale (fifth) and Newborough (sixth) all sit on 32 points at the end of round 13, behind league leaders Yallourn/Yallourn North and Yinnar.

The Tigers and the Bloods were the biggest winners of the round, jumping from fifth and sixth, respectively.

After low-scoring first quarter which resulted in the Bloods heading into the sheds 1.1 (7) to against a scoreless Demons, Trafalgar shifted gears in the second quarter to finish the first half 5.6 (36) to its opponent’s 0.1 (1).

Boolarra got its solitary goal of match in the third quarter, thanks to a Kyle Alexander major, as the home team continued to turn the screws – piling on seven goals in the quarter.

Lochlan Farrell had a field day, booting five goals for the home team to be named best on ground.

Steven Fox was named best for the Demons.

Cold and drizzly conditions greeted Mirboo North and Hill End for their Indigenous Round clash at Walter Tuck Reserve on Saturday.

Gunai Kurnai artist Ronald Edwards performed a smoking ceremony before the match, having previously designed the shirts worn by the two teams in the clash.

Both teams were evenly matched up during the first quarter, with both moving the ball well and gaining their share of possession.

Mirboo North then kicked into another gear and dominated for the rest of the game, giving Hill End very little opportunity in front of the goal.

The Tigers came out on top with a 99-point lead which has boosted them into third position on the ladder for the first time this season.

“We had an even contribution of effort from all the players, so it was great to get the victory today,” Bennett said.

“We had a really new group of players at the start of the season and it has taken us a few games to get into our stride and gel together but things seem to be working for us now and we will be looking towards making the finals.”

“It really was more about the effort than the score,” Hill End coach Mark Bradley said of the result.

“We just didn’t put into the play what we practise in training.”

Morwell East and Yinnar’s clash at Ronald Reserve was the second MGFL match to be played as part of Indigenous Round.

The Blues managed to pull it back during the second quarter, kicking four goals to the Hawks one.

Thorpdale then let their lead slip away during the third quarter allowing Morwell East back into the game to get in front by two points.

Yinnar and Newborough put on a show for the fans in a closely-fought thriller at Yinnar Recreation Reserve.

With both teams so evenly matched it was hard to tell at this point which team would emerge the victor.

The scoreboard could have been much worse in Yarragon and Yallourn/Yallourn North’s clash at Downton Park Reserve with plenty of missed opportunities by the Bombers.

Yarragon are still struggling towards the bottom of the ladder and did not look like they would make any inroads in this match-up against the ladder leader.

Yallourn/Yallourn North dominated in all four quarters of the game to take home the victory and increase their lead at the top of the ladder, the Bombers winning 14.15 (99) to the Panthers’ 2.5 (17).