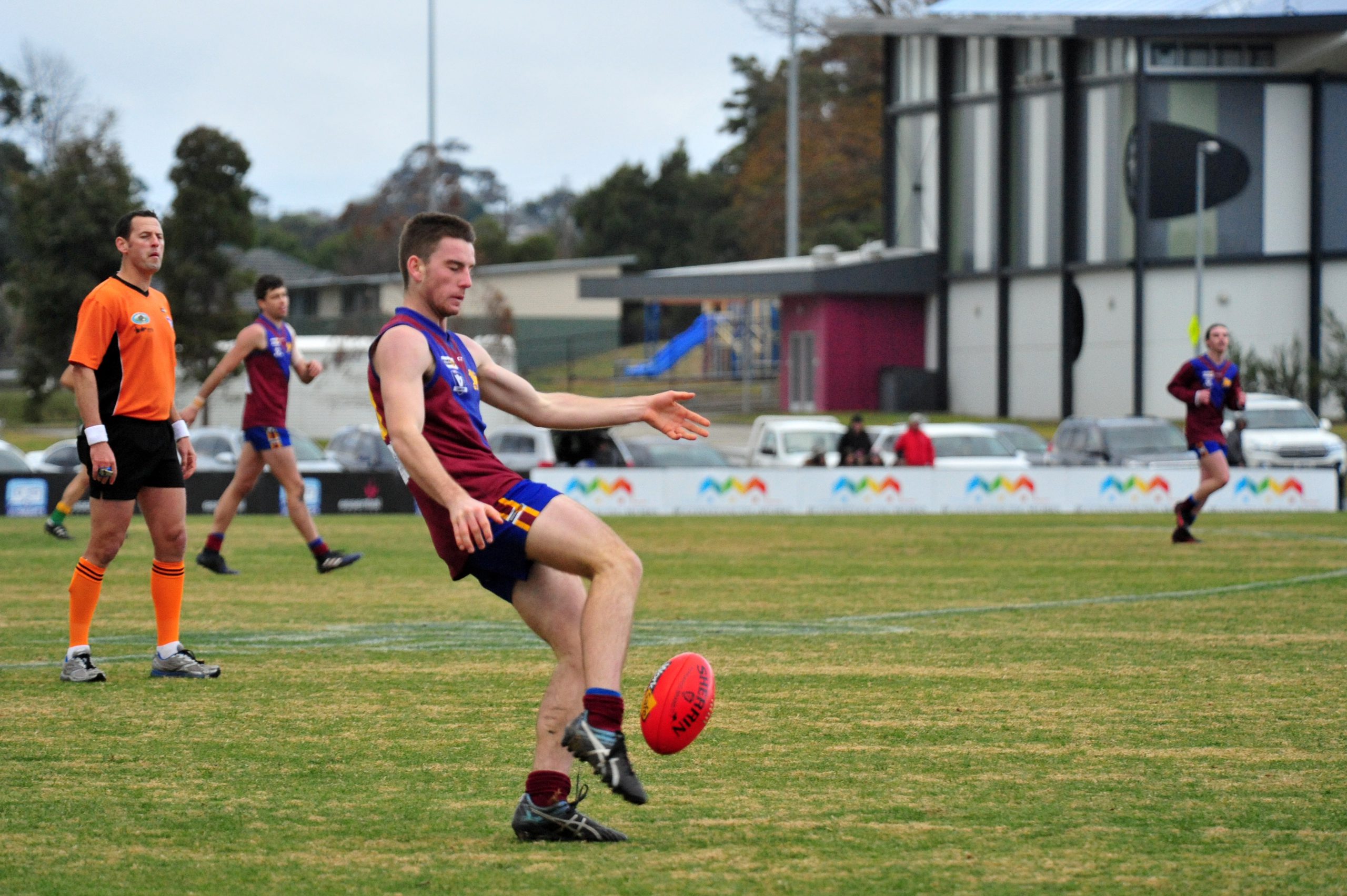 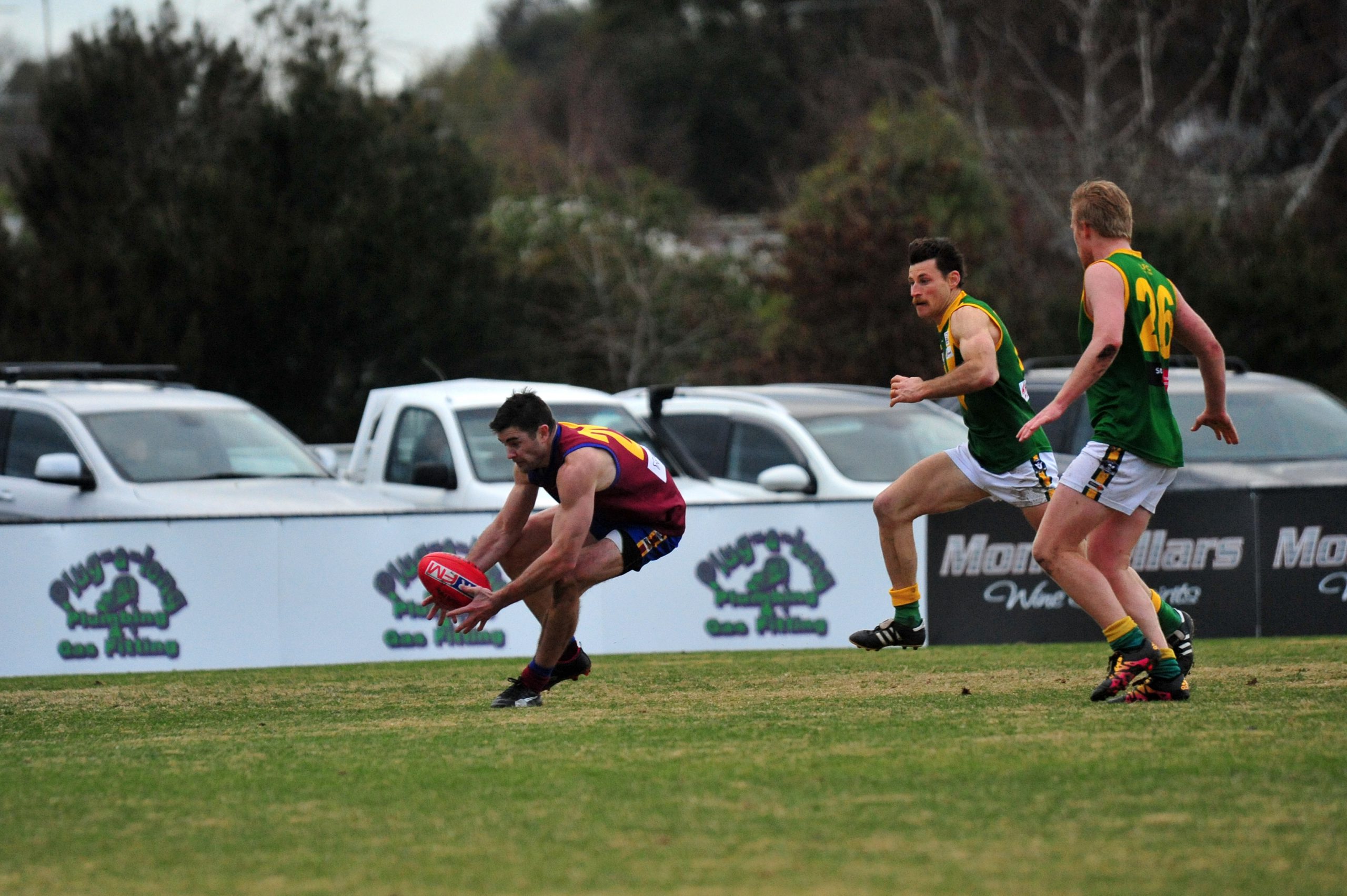 It was always going to be a tough ask for Moe to take on the ladder leader two weeks running.

The Lions put the sword to Traralgon last round, knocking it from the top spot with Leongatha quick to assume prime position.

Then on Saturday, Moe hosted the Parrots in a much anticipated fourth versus first contest.

Moe took the lead early, ahead by 16 points at quarter-time.

The gap was narrowed in the second term with the Parrots trailing by three points at the main break.

At three-quarter-time the Lions continued their fine form with a four-point lead into the final term.

“Another two seconds on the clock at the end of the game would’ve given us a shot at goal about 25 metres out to win the game,” Moe coach James Blaser said.

“We are disappointed with the loss but satisfied with our performance… we were able to keep up and pressure the top team.”

Blaser kicked two goals for the Lions, the only multiple goal kicker for his side, while Josh Hopkins and Chris Dunne registered three majors for the Parrots.

“We were happy across the board, we had a few of our senior blokes out including Daniel Risol with soreness and our vice-captain Jacob Wood remains out for about another three weeks with a broken wrist.

“Our younger guys stood up once again, we didn’t have many passengers.”

The win puts Moe at third with eight wins and three losses while Leongatha reigns supreme with nine and two.

Morwell took the lead early in the game with a seven-point margin at quarter time before the Eagles flexed their muscle to kick four goals in the second to the Tigers’ one.

At three-quarter-time the scores had blown out to a 30-point lead the way of the Eagles.

Maffra coach Wayne Butcher rated his team’s performance against Morwell as one of the best he’d seen all year.

“We didn’t have a passenger all day, it was a team effort,” Butcher said.

“Morwell were dangerous all day, they just missed a few shots in the third quarter that would’ve kept them in the game.”

Sam Pleming provided plenty of leadership for the Eagles after their captain returned to the side following a calf injury, while Tom Jolly was named best on ground for his work out of the midfield.

Maffra sits second on the Gippsland League ladder with 10 and two, separated only by percentage with Leongatha.

In round 13, Maffra hosts Warragul while Morwell heads to Sale.

It follows one of the biggest upsets of the year when the Maroons were knocked from the top of the Gippsland League ladder last round by Moe following a 33-point loss.

On Saturday, Traralgon trailed in the first break by 11 points before kicking five goals in the second to Sale’s two to lead by nine at half time.

Traralgon coach Mark Collison said it was “good to be back on the winner’s board”.

“We started a bit slow, the second half was where we played some really good footy and crept away,” Collison said.

“The game was won in the midfield, we won a lot more balls between the arcs and it really gave our forwards plenty of time and space to set up some goals.

“There were some free kicks that we gave away following a few ill-disciplined moves which saw them kick goals.”

Young gun Connor Little was recognised in his first senior game, stepping up from the thirds, with a “tough but good” debut, Collison said.

Traralgon has moved to third after an impressive win by Maffra to secure second place.

Sale remains at ninth with two wins and 10 losses.

Nathaniel Paredes was the only multiple goal kicker for the Gulls with three plus five other individual goal kickers while Russell Cowan kicked two for the Redlegs.

Warragul took the lead early in the game with a nine-point lead into quarter time before the Redlegs closed the gap at half time to trail by five points.

“I was rapt with our effort, our tackling pressure was excellent and it was nice to get a bit of reward for our training over the last few weeks,” Warragul coach Steve Kidd said.

“We doubled our tackle count on Saturday compared to the last two weeks and that just shows the intensity and effort our boys are willing to put in.”

Brad Scalzo stepped up to the role of captain, adding a lot of intensity and leadership to the game, Kidd said.

The Gulls kicked away in the third with another three majors, keeping Bairnsdale to one goal and two behinds, allowing for a 20-point lead into the final term.

The Power led at every break, up by five goals at quarter-time and six at half-time before heading into the final break with a 10-goal lead.