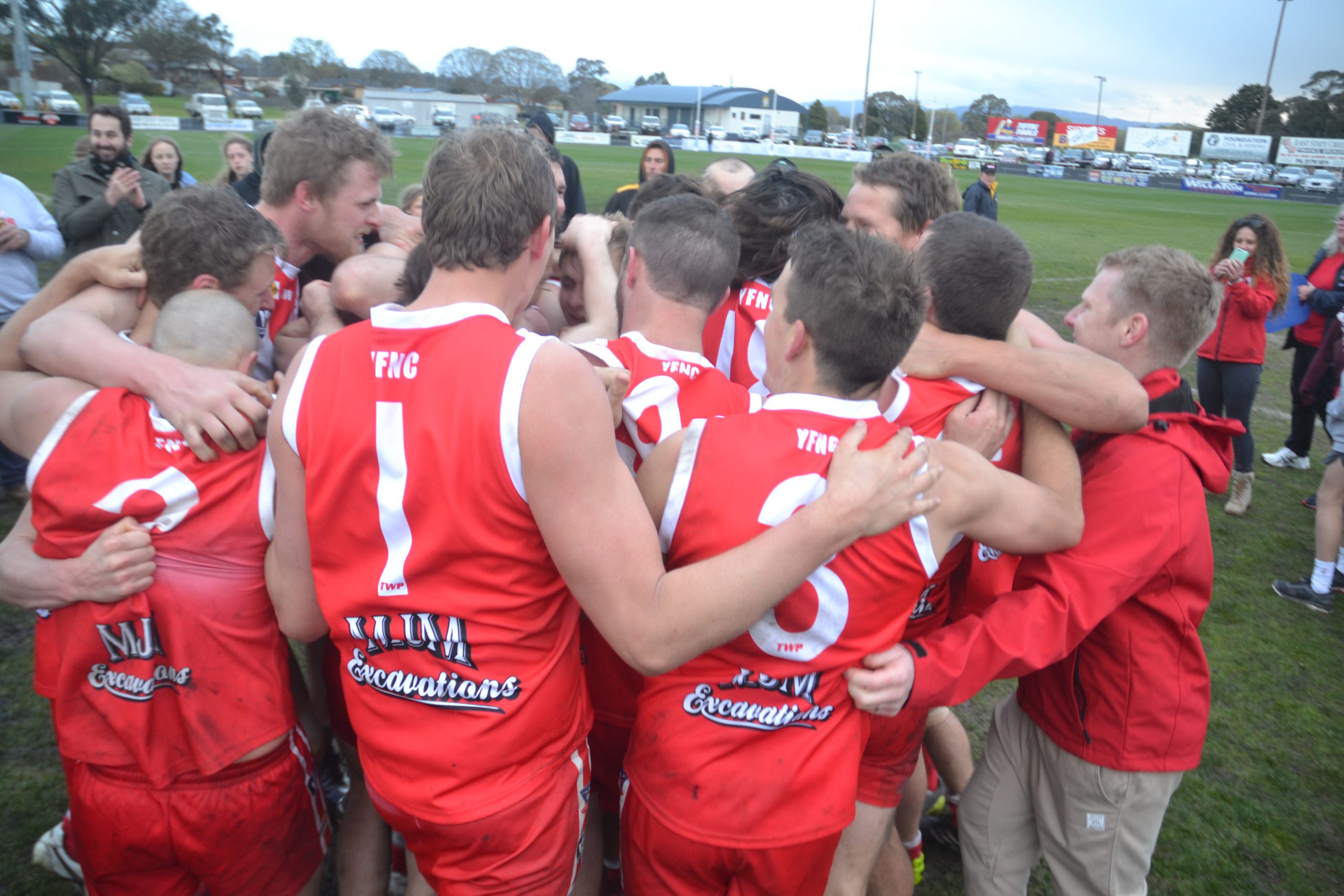 Defending premiers Yarram have a few things on their side heading into season 2019 and the main one is depth.

Their reserves won the flag last season and their thirds have played finals four of the last five years, having won back-to-back premierships in 2016/17.

The loss of stalwarts like Corbin Sutherland, Josh Swift, Trek Davis and Jake Anderson is going to hurt but may also provide opportunities for younger players such as Bradyn Wilson to step up.

With last year’s grand final vanquished, Churchill come into season 2019 with arguably the strongest squad in the NGFNL.

The one gap in their 2018 list appeared to be a second key defender with several Cougars regularly forced to fight out of their weight division in the back half.

Lucas Towns has found his way back to Gaskin Park in 2019 and can play both ends of the ground.

He and Kurt Holt will be tasked with stopping the opposition’s best two key forwards most weeks.

Nathan McRae has re-committed for the coming season.

Joining McRae in the ruck division will be powerhouse Dylan Leys and last year’s thirds’ team of the year big man Dustin Weir, meaning the Cougars will have most teams covered in the middle of the ground.

The main beneficiaries of this will be the evergreen Travis Brighton and coach Chris Williams. Likely joining them in the mid-field will be the runner up in last year’s league best and fairest Brendan Mason.

Ben Kearns will again prove hard to stop up forward with his combination of speed and footy smarts.

Spurred on by last year’s untimely demise and boosted by the recruitment of some quality performers at the higher level, Rosedale look set to climb the ladder in 2019.

On top of the likes of Rohan Hildebrand, Brandon McDonald and Ben Jones, the Blues have had back-to-back seasons of above average under 18 footballers who should be ready to take up the load.

Last year it felt like if Frazar Brouns didn’t kick a bag you could hold Rosedale to a losing score.

Throwing McDonald and Hildebrand into the front six gives them a much less predictable structure.

A couple of last year’s local under 18s in Riley Atlee and Nicholas Twomey will also provide some outside run.

Rosedale have also managed to wrestle Will Logan, one of Heyfield’s better performed thirds from last year.

After finishing second on the ladder last year and falling over in a preliminary, Traralgon Tyers United will expect to go at least a step further this year.

The loss of several key players, however, means they may end up somewhere around the same spot at the completion of season 2019.

The poise and balance of Simon Noy and the hard edge, both physically and verbally, of Michael Jacobsen will be sorely missed by the Bombers this year.

They have also lost their most exciting under age prospect in Branden McAuliffe.

An outstanding junior, Jake Cashmore has already tasted senior football but could provide some much needed pace.

Older heads like Adam Bailey and Tim Aitken on the Bomber team sheet will be central to their hopes. They, along with confirmed season 2019 players Jack Brown and the super impressive Ricky Cochrane, will need big years for Tyers to remain in the hunt.

With top-end talent to burn and a penchant for picking up gun players, Sale City have an ability to peak when it matters.

The loss of Chris Kelf is huge and the Dogs have also missed a chance to tap into some of the super talented juniors with Thomas Mann, Ari Fleming and Hamish Telfer taking on challenges at the higher level.

These losses are somewhat offset by the returning Zac Hider and the influx of other former Sale players we tend to see year in year out.

Bohdi Walker, Ben Chivers, playing-coach Jacob Schuback and Justin Mclay will likely do more than enough to trouble the better sides and will certainly be capable of blowing away the lesser sides.

After missing finals last year for the first time in what feels like an eternity, the Kangaroos will be looking to hop back into 2019 under new coach Rick Galea.

In terms of comings and goings there looks to be a positive impact thus far in the clearance list with many familiar Heyfield names returning to the club like Nick Dinsdale, Jesse Bedggood, Jesse Jackway and Nick Woodland.

The pick of the emerging sides in the NGFNL might well be Glengarry.

While it might sound contrite to say a side finishing seventh has improved greatly, for the Magpies to finish ahead of three other sides would be considered a great improvement.

New coach Wayne Henry and the inclusion of former AFL-listed player Jay Nagle will certainly help, but after a couple of years which yielded some strong showings in the seconds and thirds, the time is right for the Pies to start the upward march.

The departure of Bohdi Walker seems to have been the catalyst for several other players to seek opportunities elsewhere.

The Wildcats are capable of pulling a big name recruit, so fingers crossed for their sake they can add to the list of recruits coming to the club.

As anyone who follows the league will know, however, leaving Woodside with the four points is never an easy task, so expect the Wildcats to still trouble a few sides.

Cowwarr too have a new coach with former Maffra player Jeremy Jones joining them for the coming season. The passion and off-field set-up is never a worry for the Saints and they have the top end talent and a pool of proud and passionate payers to call upon, but they appear to be another season away from pushing back into the top half of the ladder.

Linden Brunt is looking to return and along with several other recruits the Saints appear to have a slightly stronger list to the 2018 season, however, 2018 was hardly a season to write home about.

It was a season that saw them chalk up just the two wins and finish with a percentage of 50 or so.

The list of names either confirmed or rumoured to be departing Gormandale is not off-set in any way by the known inclusions.

However, the 2019 list will not include up to a dozen first choice players from season 2018.

The positive for the Tigers is the long list of thirds heading to the club for the coming year.

The club did an outstanding job in fielding a side last year and with the addition of up to 15 under 18s this year they look set to enjoy a more successful 2019 season.