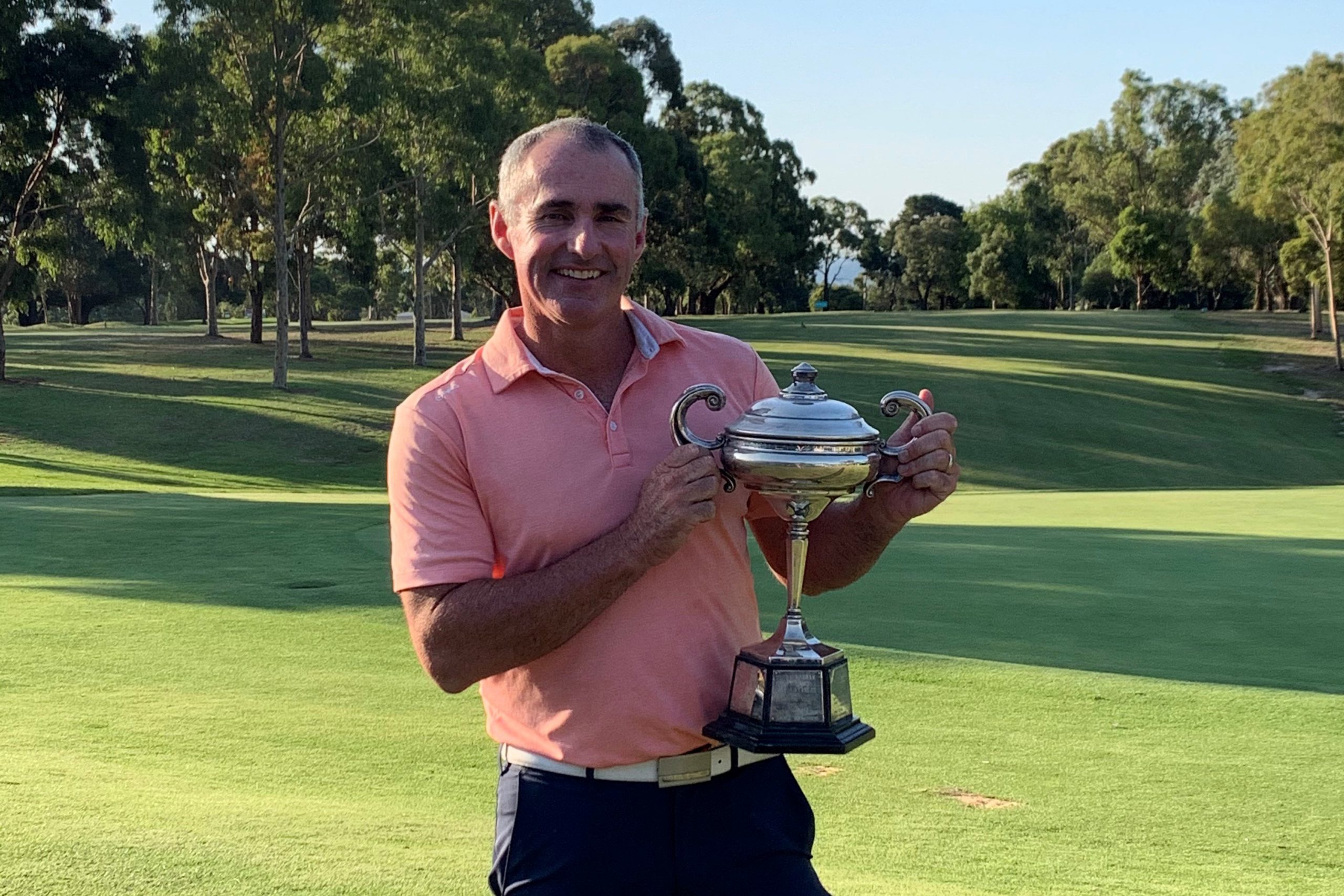 A cold beer tasted even sweeter for Matt Millar after he overcame stifling conditions and a hot field to win his first Latrobe City WIN TV Pro-Am at Traralgon on Thursday.

The Canberra golfer banked the first-prize cheque of $4490 when he eagled his final hole, the 450m par-5 to finish 12-under par.

The tension had been palpable with James Nitties (NSW) and Anthony Choat (NSW) in the clubhouse at -10 following rounds of 65 and 66 respectively.

But Millar, among the last groups to be on the course as the mercury nudged 40 degrees, kept cool when the pressure index was highest to take out the $25,000 event.

“So I thought I’d better have a look at the leaderboard and saw there were two guys on 10 with me.

“I hit a four hybrid and it took a massive bounce about two metres from the green.

The ball finished on the back edge about 45 feet from the hole.

“Thankfully I got the pace perfect with the putt and it dropped in.”

The news of the eagle soon filtered back to the clubhouse where Nitties, a former member of the USPGA Tour, joked “I’d rather get beat by two than one.”

For 43-year-old Millar, the win was his first since the Rockhampton Pro-Am in June 2019.

“It feels good to win again,” he said.

“I’ve had a bit of a rough trot recently with injuries, particularly back trouble since September last year.

“But it’s been good to come down here, play some Pro-Ams at Bendigo, get the game time under the belt and now a win on the board here in Traralgon.

“Last year I shot seven-under the first round and had a rough second round, so it’s been good to put it together this time.”

Millar started the final day four shots off the pace set by Tamworth export Tim Hart, but charged to victory on the back of a sensational 64.

The Territorian made seven birdies and an eagle, with his lone blemish coming with a bogey on the par-5 second.

Millar praised the quality of the Latrobe Valley layout.

“The course was in mint condition and is a credit to (curator) Nathan (Arnett) and his team, the greens rolled immaculately,” he said.

Millar was optimistic the Traralgon success would be the catalyst for a bright 2020, with a series of big events on home soil ahead as well as his first year on the Japanese Tour looming large.

“I played Q-School in early December and got through which was great,” he said.

“I’ve got status in three or four of the first 10 events of the season, which starts in April and May, and if I do well, then be able to get into more tournaments.

“Japan’s only a one-hour time difference to here and you can fly direct from Melbourne or Sydney, so I’m looking forward to it.”

Millar beat out a quality field of 69 professionals who teed it up at the Traralgon Golf Club. Nitties showed the class that saw him spend two seasons on the USPGA Tour and win stateside on the Web.com Tour, with some outstanding drives putting him in contention.

His eagle on the 308m par-4 18th when he drove the ball to the green was top-draw golf. Nitties and Choat each collected $2349.25 for second, with Hart finishing fourth at -8 after carding an even-par 72 on day two.

A seven-strong professional women’s competition was run alongside the event with Montana Strauss and Melissa-Jayne Orr finishing tied at nine-over par.

“It was probably the best the course has ever been thanks to some good rain,” he said.

“The course itself is always pristine, we always get good feedback from the players, but it was particularly good this time.

“The club is always very pleased with the way it’s run, the Pro-Am Committee have been doing it for a long time so it’s pretty finely-tuned.

“(Preparing for the Traralgon Pro-Am) is a bit like painting the Sydney Harbour Bridge, you finish painting one end and then you start again at the other.”

Whitehead said it’s great for the club to host some of the country’s top golfers at a key point in their season.

“It is one of only a few two-day Pro-Ams left in Victoria,” Whitehead said.