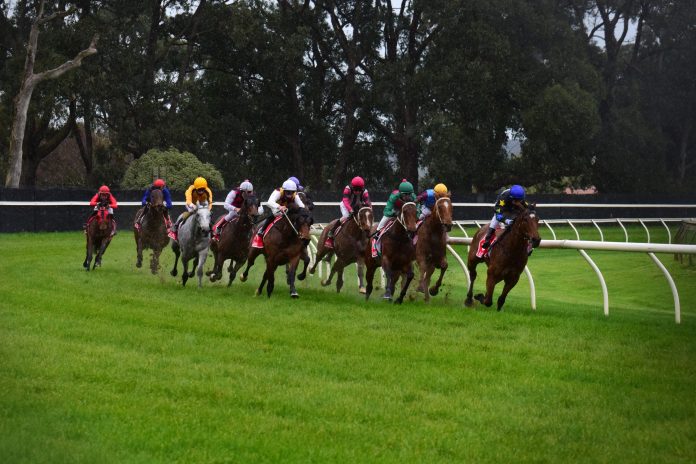 The 22-year-old apprentice hoop’s career has gone strength to strength after transferring to Cranbourne trainer Mick Kent in July.

Bryan shared the riding honours at Moe on Tuesday with Jason Maskiell with a winning double aboard Whipcracker Way and Nick’Em.

Bryan earned glowing praise from trainer Philip Stokes after steering the four-year-old to his second win from three career starts.

“Horses run for her, she (Bryan) rated that horse beautifully,” Stokes said.

Nick’Em’s trainer Ray Besanko said he would stick with the 2kg claimer after her first ride for the stable resulted in the four-year-old winning the Ladbrokes Switch Maiden Plate (1011m).

“I’ve got a few good kids riding for me at the moment,” Besanko said.

“It’s nice to win one today, I’m sick of running seconds and thirds.”

Nick’Em ($10) travelled sweetly in the run and after overhauling leader Mr Stack midway down the straight, packed too much punch for the closing Uranium to win by a length and a quarter.

Greg Eurell was pleasantly surprised by the debut win of Molly Golighty ($17) in the S&S Equipment Hire Maiden Plate (1011m).

Raced by noted syndicator Shelley Hancox and a large group of owners, the chestnut filly (ridden by Lewis German) rattled down the outside to nail blueblood Manaajim by a nose.

“That was a big effort, absolutely,” Eurell said post-race.

“She didn’t have too many favours, but she did a good job.

“She had me a little bit worried when she was below part the second time we trialled her, because she had been so genuine in her work.

“We came to the races today hoping that we’d seen previously was what she brought to the races and she did that.”

Robbie Griffiths and Matthew Allen teamed up with the day’s other victor Our Chevalier in the Colli’s Hair Design Maiden Plate (1619m).

The striking son of Redoute’s Choice produced a surging run to land his first success at start eight, pleasing Griffiths.

“He was good today, it’s nice to see him do that because he’s been promising to do that for a while,” Griffiths said.

“He’s a beautifully bred horse, very quiet, he would have done it (won his maiden) a lot earlier, but he had a tie-back operation.

“He finds it easy to get throat and respiratory conditions. He’s always had the ability, we just had to work out the best way to manage him in the respiratory department.”