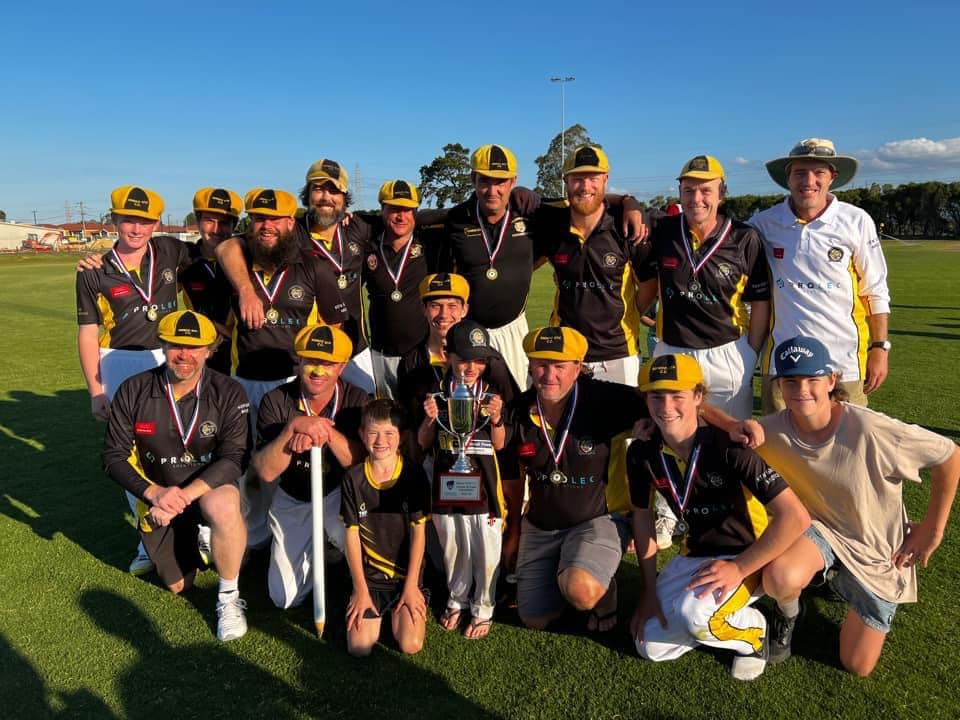 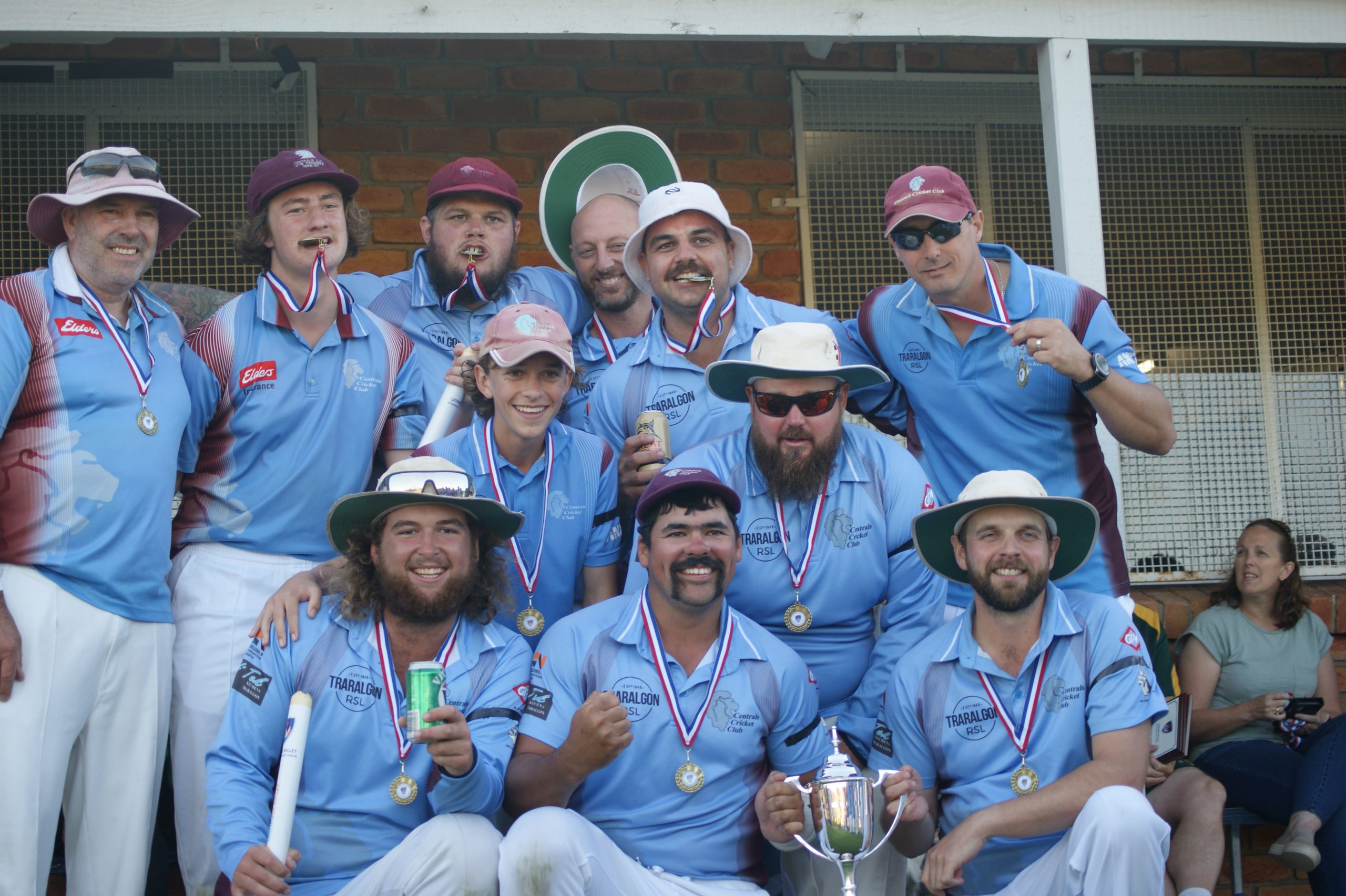 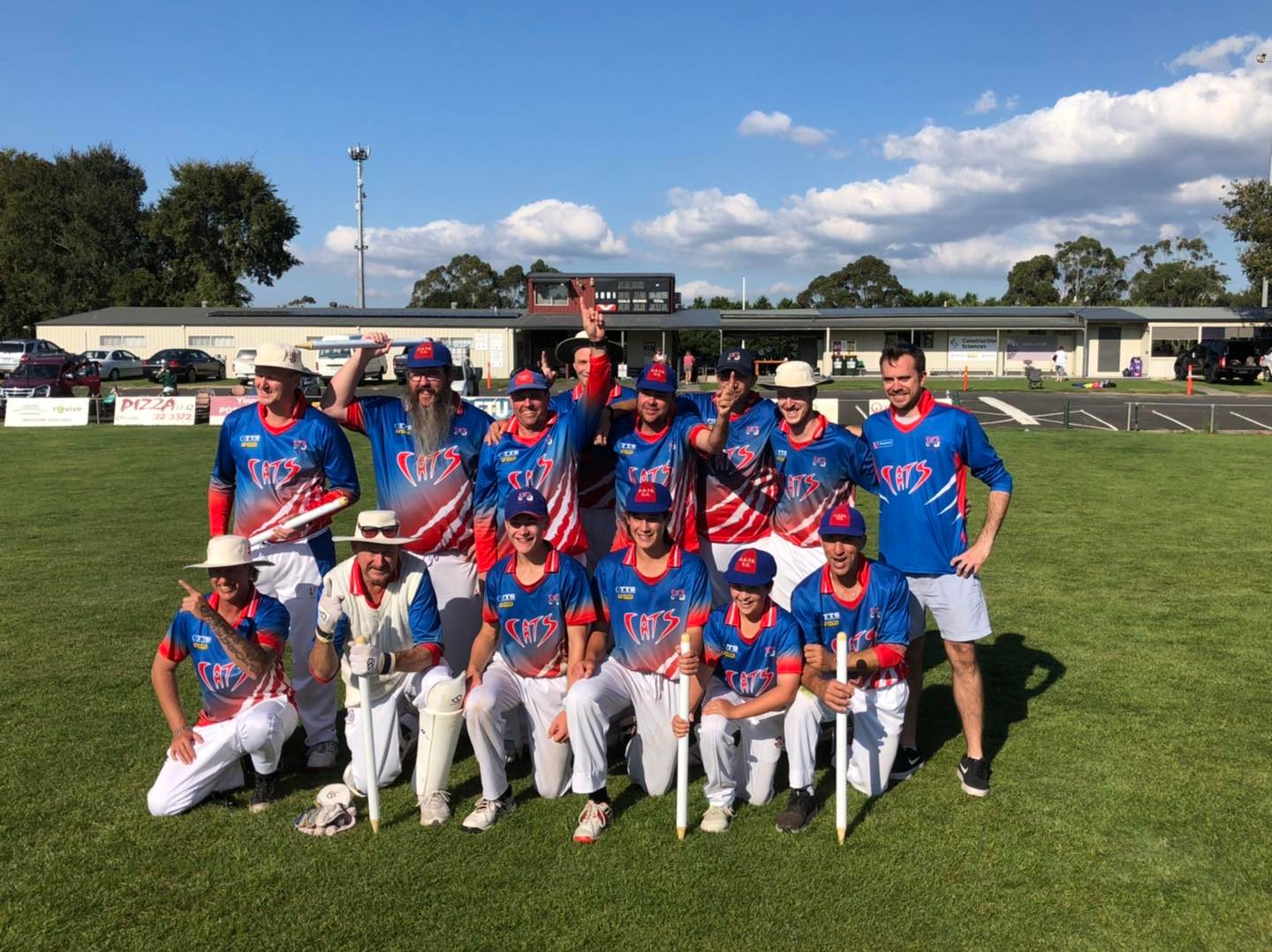 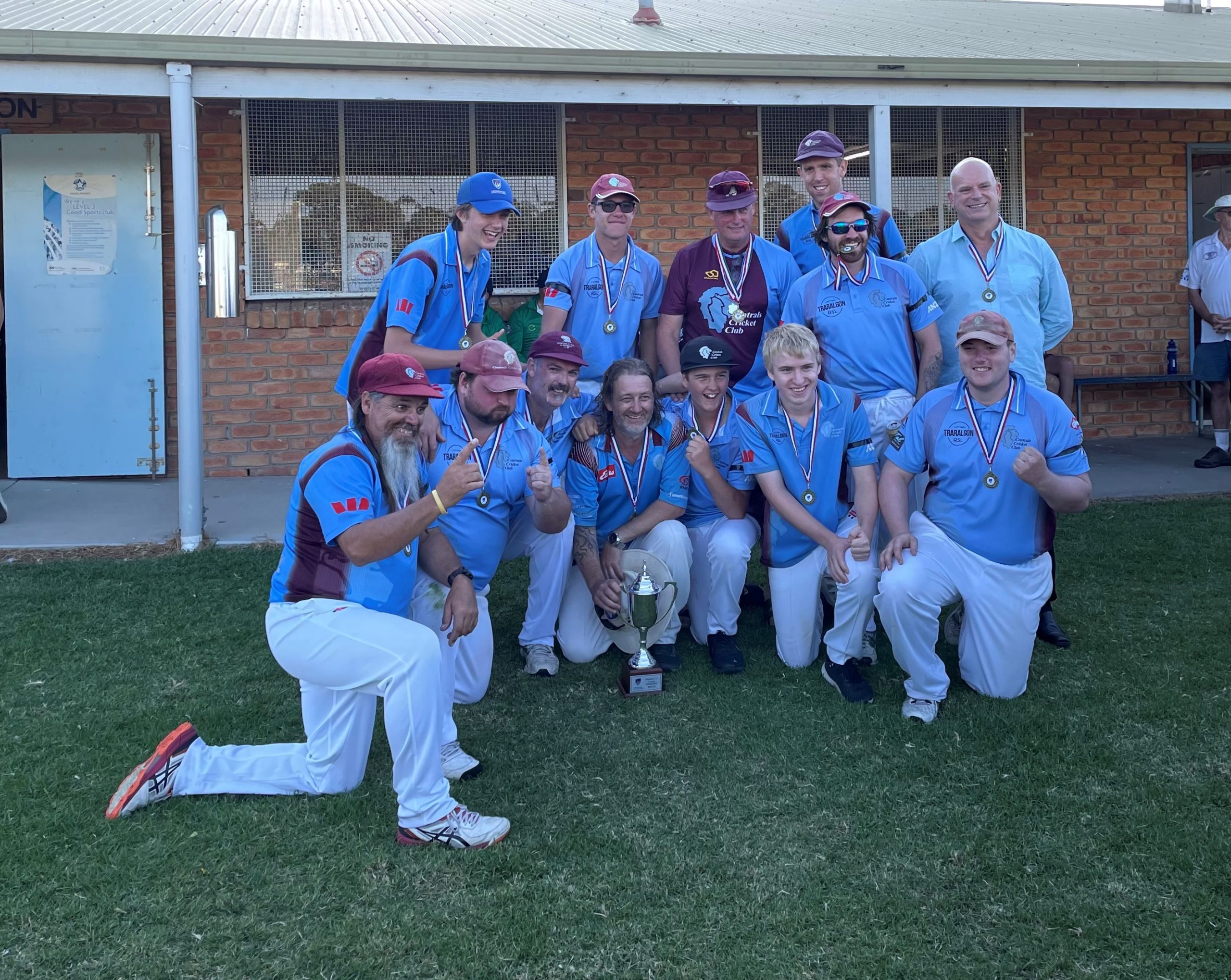 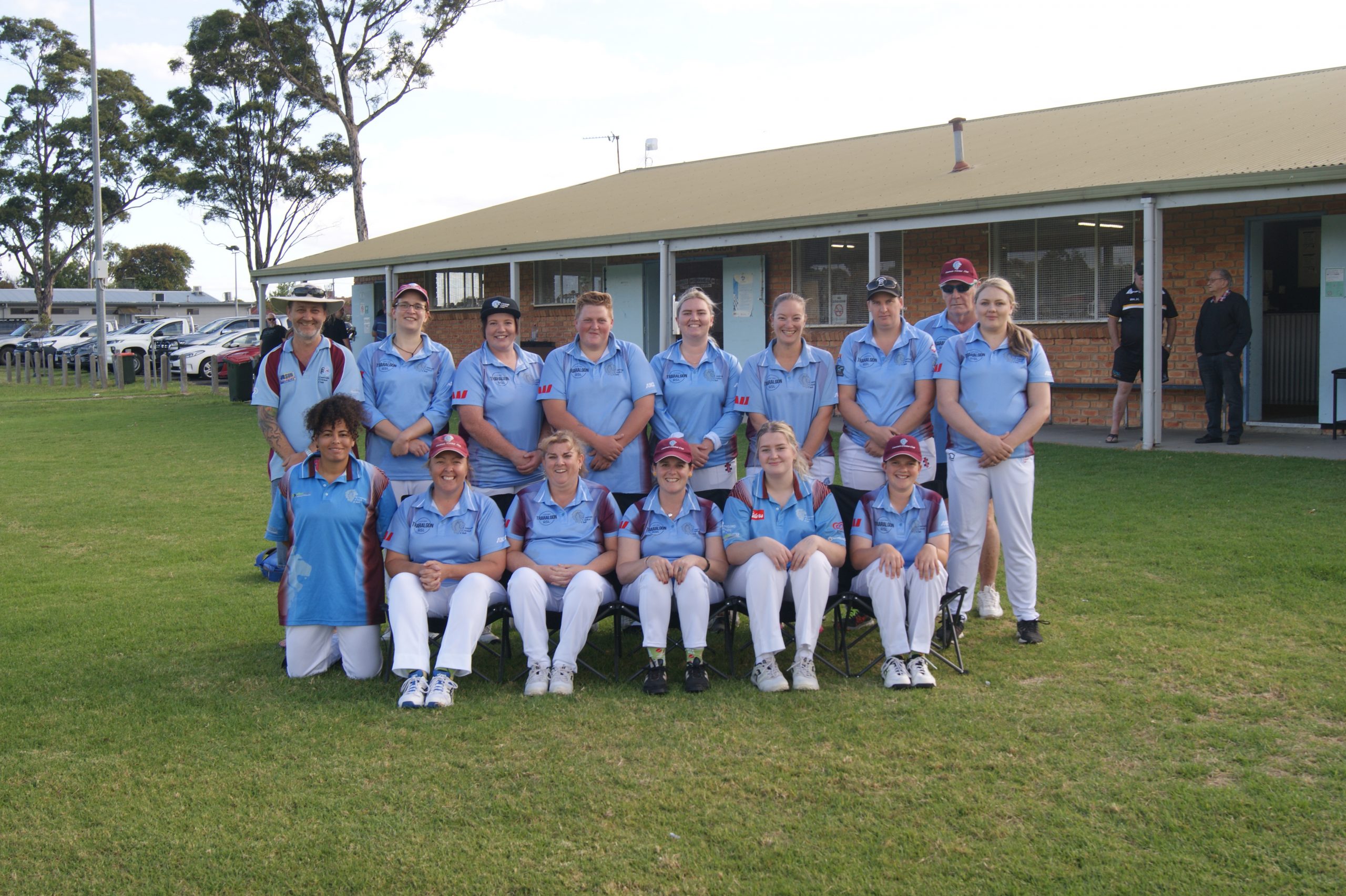 LVDCL
By GREGOR MACTAGGART
MIRBOO North lived up to expectations with a commanding six-wicket win against Morwell in the Premier B Grade grand final at Keegan St Reserve.
Despite Morwell having the chance to play on home soil in the decider, Mirboo North produced a complete all-round performance to lift the premiership cup.
Morwell was restricted to 5/152 on a wicket which has seen numerous scores of more than 200 plus this season.
Will Cheatley headlined a disciplined bowling performance from Mirboo North, taking 3/25, while Rohan Hughes (1/19) and Anton Thomas (1/19) were frugal with the ball.
Lachlan Day top-scored for Morwell with an unbeaten 48, with young gun Connor Seymour
(32), his dad Paul (27) and Craig Giddens (27) other notable contributors.
Mirboo North overcame the early loss of Chris Anders thanks to an even batting display.
David Woodall (21), Clinton Wise (27) and captain Matt Snell (30) did the early heavy lifting before Cheatley (36 not out) and Jarrod Speed (35 not out) completed the job with an unbeaten 73-run stand.
Glenn Gniel (2/35) was Morwell’s best bowler.
CENTRALS went one better than last season, winning the B Grade premiership thanks to a 72-run win against Jeeralang-Boolarra at Peter Siddle Oval.
The Lions elected to bat after winning the toss and could thank Dean Rode for lifting them to 137.
Rode, who made 50 in the previous season’s grand final loss to Newborough, produced a gem of a knock, facing 114 balls for an unbeaten 64.
The true value of that knock would be illustrated when Jeeralang-Boolarra took to the crease, although only one other Centrals’ batsman Brenton Ould (21) reached double-figures.
Chris Dekaste (3/15) was the most successful of the Panthers’ bowlers, with Alex Devonshire (2/28) and Tom Holley (2/27) claiming multiple wickets.
Jeeralang-Boolarra hopes of running down the target were on the back foot from early after losing opener Tim Laaks with just two on the board.
He was the first of three early victims for Dan Doble (3/17), who was ably supported by Ould (3/10) and Dean White (3/24) as Centrals knocked over the Panthers for a moderate total of 65.
Only three Jeeralang-Boolarra batsmen reached double figures in Lachie Smith (19), Dylan Smith (15) and Tom Beamish (13).
CATS won a low-scoring Premier C Grade grand final against Willow Grove at Yinnar.
Batting first after winning the toss, CATS mustered 9/111 from its 40 overs, with Tony
Harrup (22) top-scoring.
Liam Cumiskey (3/19) and Jay van der Stoep (3/28) did most of the damage for Willow Grove.
But any smiles after the bowling effort were gone soon after the batting started with CATS simply strangling the Grovers batting line-up.
Willow Grove was bowled out for 40 with captain Matthew Payne (4/8) and Ben Hagley (4/9) the heroes. The success made it a brace of premierships for CATS after the club won the Premier A Grade crown against Churchill.
CENTRALS made it a title double as well by winning the C Grade grand final against Jeeralang-Boolarra.
The Lions won a run-filled decider by eight runs at Maryvale Reserve.
Batting first, Centrals posted 7/211 with Alister
Foley continuing his purple patch of form to score a brilliant 95.
Brad Howlett produced a gem of a knock with a sparkling 38 not out from just 22 deliveries and his son Brodie chipped in with a run-a-ball 24.
Jacob Cecil, Paul McGrath and Shane Gill each took two wickets for the Panthers.
Jeeralang-Boolarra produced a spirited chase of the target, setting up a thrilling finish.
Opener Tom Reiske laid the foundation with 58, while Gill (23) and Gary Larkin (20) produced
good cameos.
Nathan Spark gave the Panthers’ faithful hope, scoring an explosive 45 from 32 balls, but the task was too great as Centrals held their nerve.
Brad Howlett (2/63) was the only Lions’ bowler to take two wickets, but emerging talent Callum Whitehead showed why he is a bright future with figures of 1/25 from eight fine overs.
THE golden premiership run for Centrals started two days earlier when the Lions secured the
inaugural Women’s Division title.
Centrals defeated Raiders by 48 runs in the grand final at Maryvale Reserve, Morwell.
Sent into bat, Centrals posted 2/99 from its allotted 16 overs.
Bridie Kimpton top-scored with an unbeaten 33 from as many deliveries, while Taylah Fitzpatrick (19 not out) and Kerryn Doble (18 retired not out) also featured among the runs.
Leah Henderson (1/15) was the pick of the Raiders bowlers.
Raiders never looked a serious threat in the chase, posting 5/51.
Mandy Quinn top-scored with 15 not out and Jenny Witney made 14.
Emily Shaw (1/9) and Velleda Bradford (1/10) were the pick of the Centrals’ bowlers.