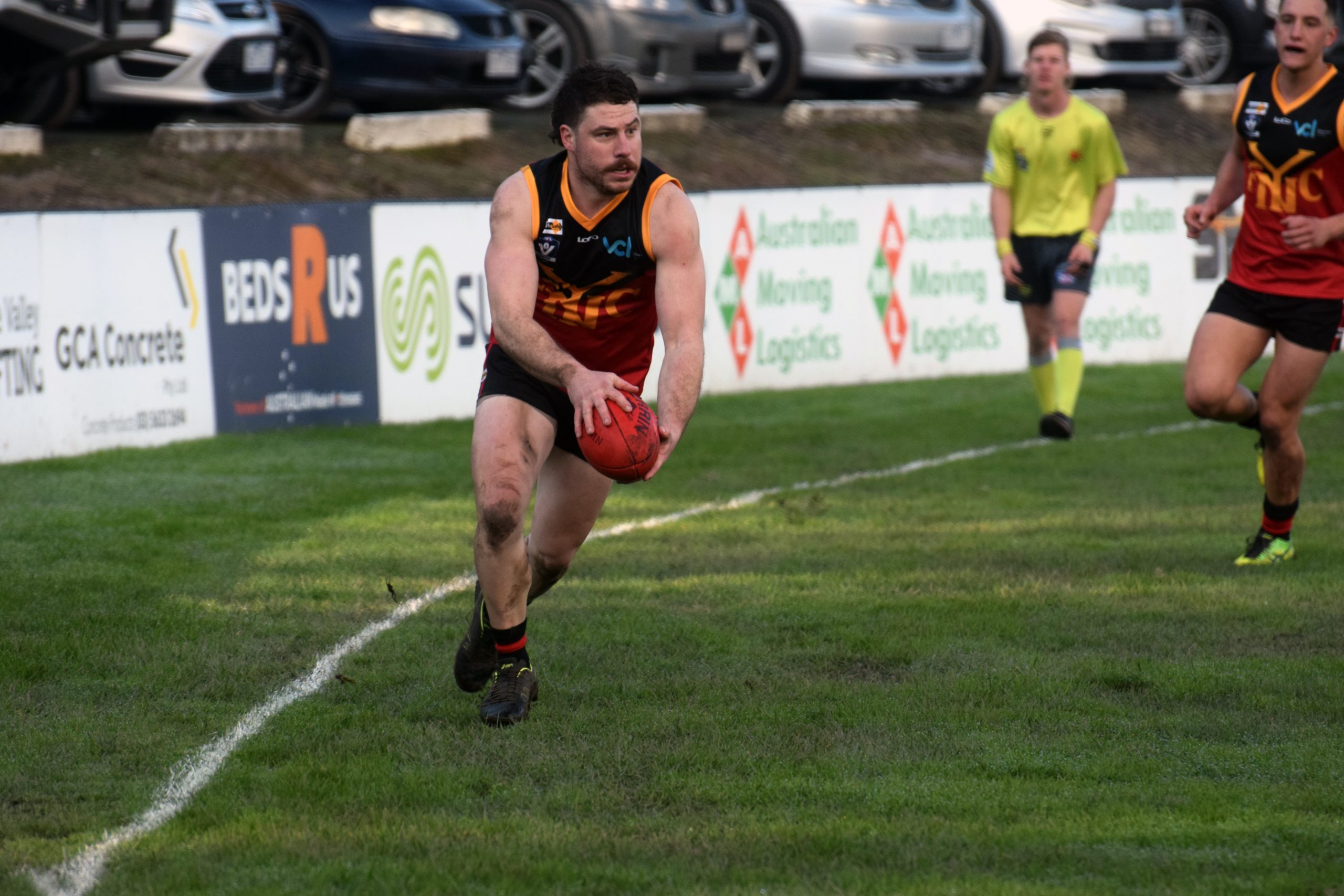 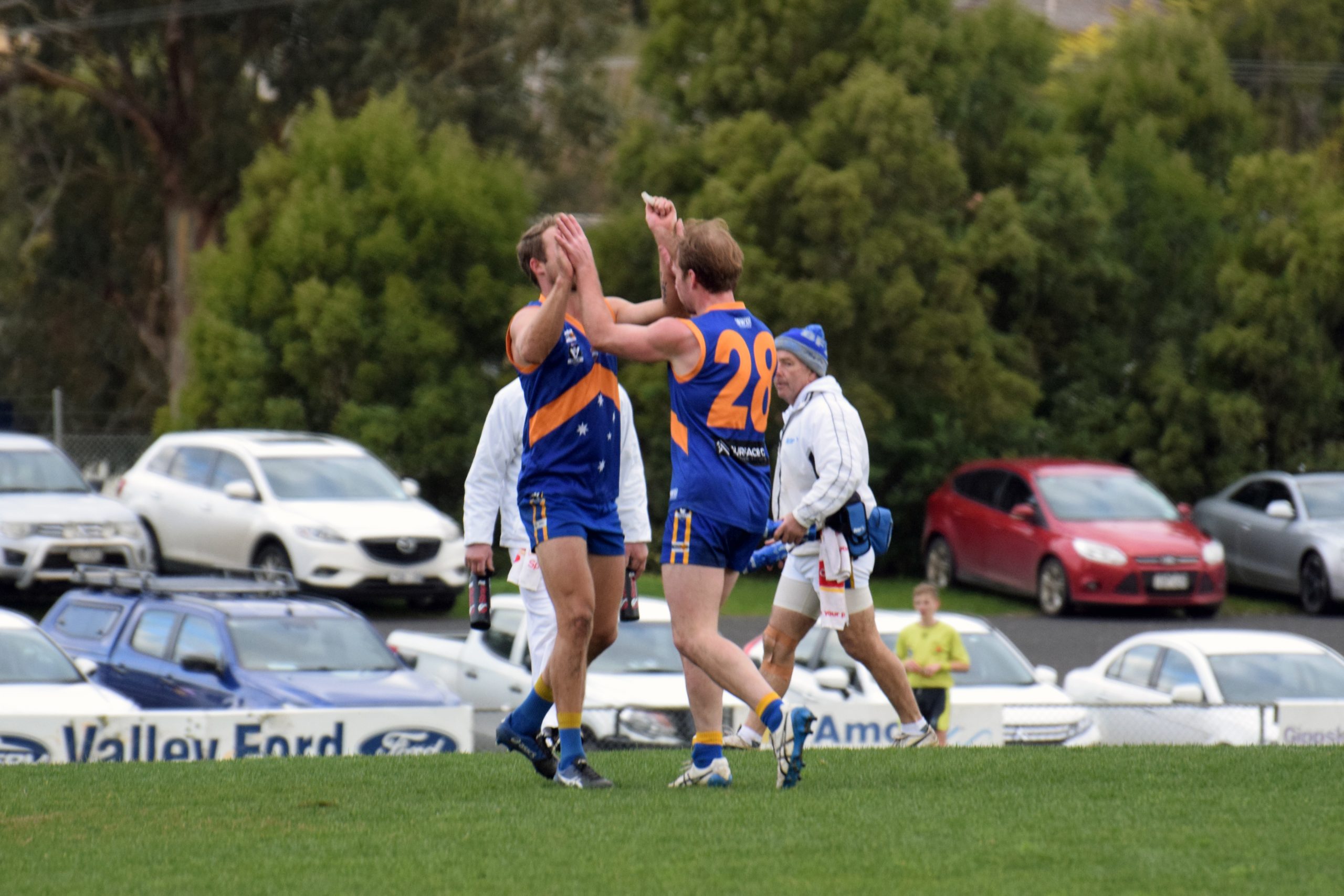 THE large bang heard around the Latrobe Valley on Saturday afternoon at
approximately 4.30pm was nothing to concern yourself with.
Unless you are a fan of the Gormandale Football-Netball Club of course as the noise was the sound of the Tigers crashing back to earth after their Round 1 drought-breaking win.
While hopes of back-to-back wins were probably dashed when the Gormandale permit players from week one boarded their flights back to the Northern Territory, the 236-point demolition job done on them by Churchill was unexpected to say the least.
Churchill was without a raft of first-choice players with the likes of Kurt Holt, Chris Williams, Ryan Lowrie, Joey Whykes, coach Jordan Fenech and late withdrawal Cain Iorangi all not taking the field.
Come quarter time however the game was dead and buried with the visiting Cougars slamming home 11 goals to one.
This theme was continued for the remainder of the game with Churchill kicking 11, eight and 11 goals across the next three quarters to amass a whopping 41.17 (263) to 4.3 (27).
Chief among the goalkickers was Ben Kearns who helped himself to 11 before taking an early shower at three-quarter time.
Corey Nicholls and midfielder Jake Roe Duggan took over where Kearns left off and helped themselves to a six pack each.

Churchill coach Fenech was seemingly impressed with his side’s performance but stopped short of being too effusive.
He was pleased how the boys adapted on the fly with some forced team changes. He was also happy to see an improvement on accuracy in front of goal.
Fenech noted this was a focus during the week after poor form in front of the sticks during practice matches and his side’s Round 1 victory.
THE closest match of the round saw Woodside continue their winning start to the year as they consigned a gallant Rosedale to their second loss of the season in a 9.11 (65) to 7.7 (49) scoreline.
Woodside restricted Rosedale to just the solitary major until the main break and but for inaccuracy in front of goal the Wildcats could have had the game parcelled up at half-time. Woodside coach Michael Duncan heaped praise on Jeremy Morgan for his efforts in defence and also acknowledged the efforts of fellow defenders Will Broadbent and Ben Johnson.
Duncan also acknowledged the excellent return of Nick Stockdale who played his first Stockdale helped himself to a pair of majors, but it was new recruit Zac Richards who led the goalkicking tally bagging four.
Duncan suggested both sides would be happy to have next week off noting the tackling pressure was through the roof in trying conditions.
Duncan concurred with the Rosedale match committee in naming Jason Garrett, Tom Northe and Brad McKay the players he thought where the opposition’s best.
IF inaccuracy cost Woodside a chance to put their game to bed early it appears both sides in the Traralgon Tyers United/Glengarry match-up followed the Wildcats lead.
Glengarry managed only seven majors from their 21 scoring shots while TTU fared only marginally better kicking truly 16 times from three dozen shots at goal.
After an honourable loss last week to Yarram, it was crucial for TTU to get the points this week and that is what they did with a comfortable 10-goal victory 16.20 (116) to 7.14 (56).
While Brad Kelleher managed to help himself to seven snags it wasn’t enough for the power forward to be named among the Bombers best half a dozen players.
IN the final match of the weekend, it was Sale City who took the points over a struggling Heyfield outfit.
The tricolours six-goal win in their first hit out of the season will have many sides on notice with rumours of a Doggy demise in 2022 seemingly a long way off the mark.
With seven players hitting the scoresheet, headed up by Sam Davidson who managed four, Sale City ran rampant after half-time kicking 11 goals to five to have the visitors singing their song loud and proud on the final siren after a 14.13 (97) to 9.8 (62) win.
For Heyfield it was the evergreen James Beha and young gun Tyson Birss leading the way.
With Liam Heasley unable to hit the scoreboard like he did so regularly last year it appears the Kangaroos are in desperate need of an avenue to goal if they are going to trouble the better sides in season 2022.
ROUND 2 action concludes this Friday at Yarram where the Demons take on Yallourn Yallourn North in what has become the traditional Good Friday clash.
For those unable to attend the match will be covered by Gippsland FM with the pre-game commencing at 4pm and live action from the first to final siren starting at 4.30pm.
With Yarram believed to have up to eight changes to their Round 1 line-up and the Jets likely to recall superstar Dean MacDonald, who missed Round 1 with injury, and potentially roll out a few permit players, this promises to be one of the games of the year.