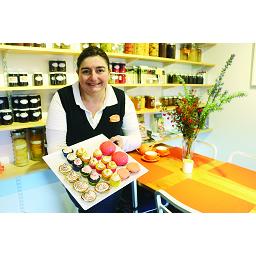 A Mirboo North chef with a knack for networking has been named a small business champion, as part of this year’s Victorian Small Business Festival.

The program includes more than 24 festival events across Gippsland in August in which small business owners can access ideas and pick the brains of industry experts.

Ms Hicken established the gourmet kitchen in 2009 and said the festival was a great opportunity for small businesses access valuable training.

“We’ve attended the festival every year since 2009. We make an effort to get along to something every year and have learnt valuable skills which we still apply to our business today.”

The former TV engineer made the switch to the kitchen when she retrained as a chef and worked in hotels before she followed her dream of living the clean country life. Ms Hicken uses as much local produce as possible and has a strong relationship with Gippsland food producers. She makes everything in-house and grows some of her own seasonal produce.

Ms Hicken said starting a small business had its challenges such as finding staff, accessing the baffling world of technology and having to be a jack-of-all trades such as marketing and bookwork.

“Small businesses are very large employers and an important part of Gippsland communities. It’s important we can get as much support as we can,” Ms Hicken said.

“I’m forever expanding my network of contacts. It’s a good idea to meet people and talk to them as you never know what will come out of it.”

The Small Business Festival kicked off recently and will continue throughout August with events held online and across metropolitan and regional Victoria. For more information, visit festival.business.vic.gov.au.