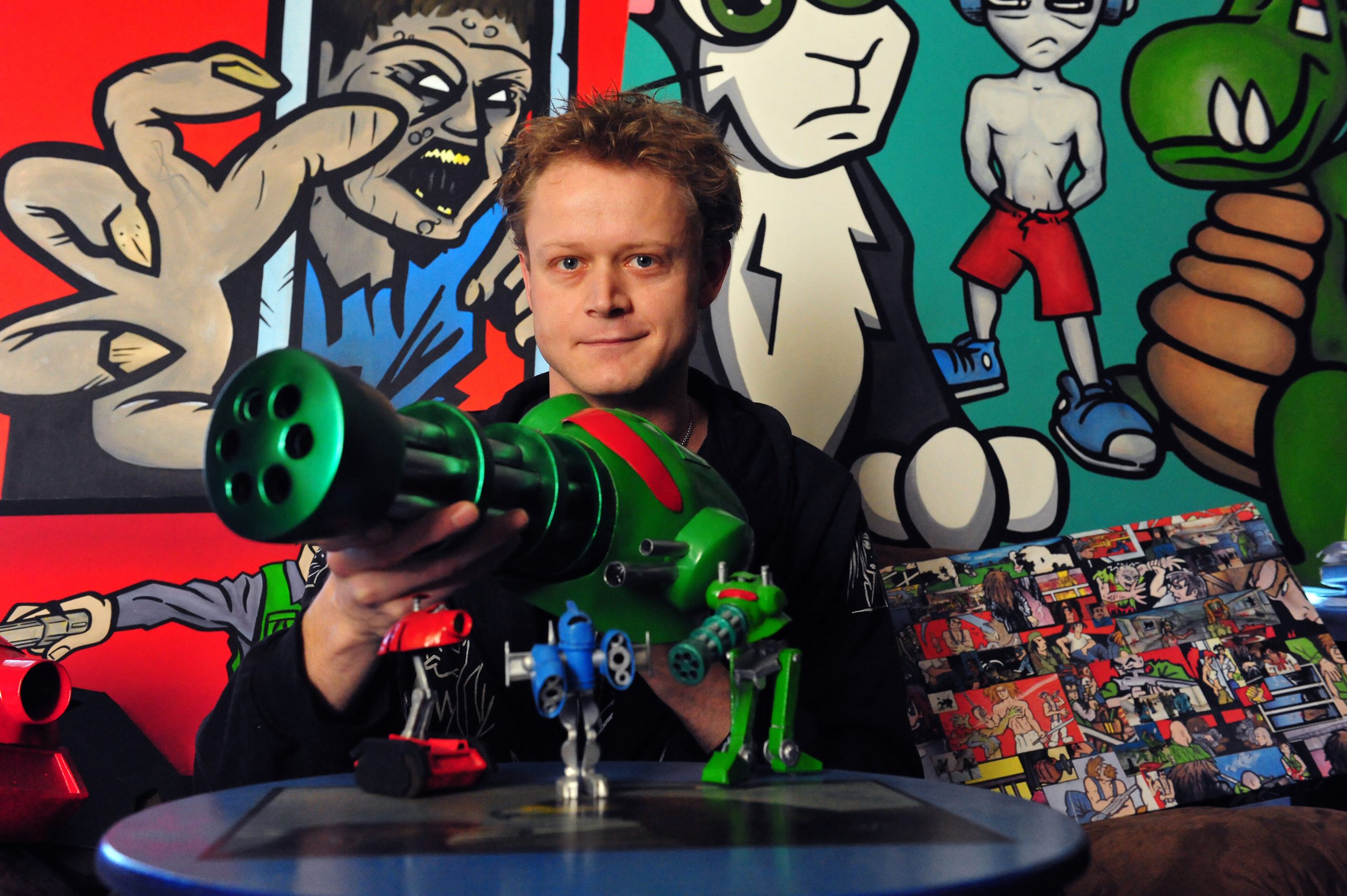 Apart from a one foot-tall Gumby figurine perched on his backyard window, waving happily at neighbouring flat tenants as they walk by, there is little else to prepare visitors for what lies inside.

Packed wall-to-wall with countless figurines, paintings, sketches, and gadgets, Ian’s ‘lounge room’ has become his personal full-time studio, where his creative pursuits have their own dedicated war room.

“This can be pretty full on for some people when they come here – they know how much I’m into this stuff, but I think it gives some people a headache,” Ian said.

“I guess it can all be a bit anti-social, but I’m a single guy, with no kids and no mortgage – this is all I want to do,” Ian said.

A large aeronautical wing-shaped sculpture, made from paper and putty, was on the floor awaiting a paint job, however the room already smelled of paint – a vibrantly coloured portrait of a robotic character was drying to the side.

“I created those to show people that I’m not all dark thoughts – those robots are my ‘happy’ side coming out,” he said.

His self-made action figures, depicting characters from his comics, stand on the shelf among recognisable figurines from Star Wars and sci-fi pop culture.

Then there is his robot sculptures, which take the ‘Do-It-Yourself’ ethos to the absolute extreme, in ways which can only be appreciated when viewed first hand.

At the time of The Express’ visit, Ian was busy preparing for his upcoming exhibition at arcYinnar, which comes five years after his first showcase in 2008 attracted about 200 people – a turning point for his creative pursuits.

“That exhibition was called ‘Refraction’, which is also the name of my comic; it means to ‘change direction’ – at the time I didn’t believe I was doing enough artistically – and that exhibition was my decision to really commit myself to this stuff,” he said.

“I dabbled in traditional cell animation, and did stop motion for a laugh – but it takes six hours of work for 10 seconds of footage; I appreciate everyone who does that but I don’t have that kind of patience.

“Once I found computer animation – it was a marriage between us.”

Ian’s latest animation pursuits will be on display along with his comics, paintings and sculptures at his ‘Robot Refraction’ exhibition, which opens at arcYinnar on Saturday at 1.08pm, and runs until 6 July.