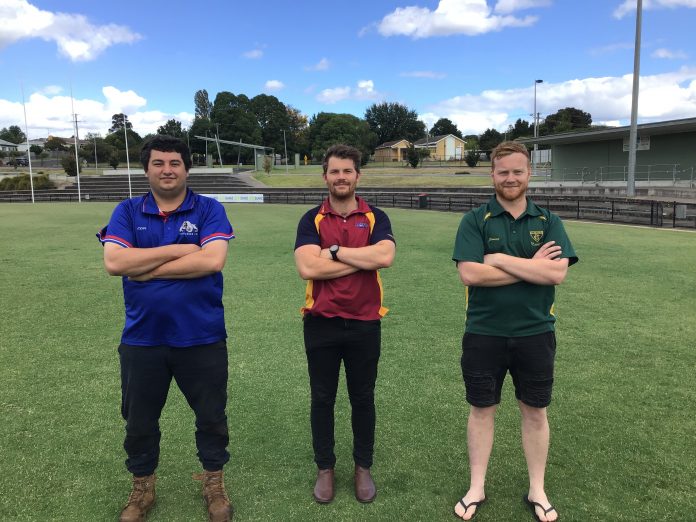 WHILE there are a number of high profile names coaching senior football teams across Gippsland this season, few people seem to give much limelight to those taking on the much harder job of coaching the team directly below them.

Like many others brave enough to put their hand up to coach the reserves in country football, Aaron Wilson, Jack Brincat and Jimmy Grant will be taking the reins of Moe, Newborough and Hill End in the grade affectionately known as the twos, magoos, scoobs and scooby-doos.

As far as football teams go, the reserves well and truly belong in a class of their own.

In no other grade of football are you likely to see dozens of player magnets covered in strapping tape with names written in permanent marker on the unavailable list, or game-play where the same player who can’t hit a target under absolutely no pressure can then kick the most freakish goal ever seen moments later.

Grant will have a fair bit on his plate as he juggles coaching the reserves and also playing in the senior game afterward.

“I didn’t really think about coaching until I saw it advertised and thought why not just take a step up – challenge myself to play senior footy and coach reserves footy,” he said.

“The main focus was if I was to be appointed to have a great support crew around me that can take over the final stages of a game if need-be while I’m going to warm up (with the seniors).

“I have a great assistant coach and team manager who the players respect a lot, they’re two people I can really trust to take over.”

Having been around local football long enough, the three mates know the territory they are entering, and know the specific challenges that will meet them as reserve grade coaches – challenges no senior coach ever has to deal with.

No other job at a football club requires the same level of flexibility than that of the seconds coach, as injuries during the season are inevitable, meaning the senior team always need to call on players from the seconds to step up at some stage.

At this time of year when everybody is keen and nobody has played, the reserves job description is to ‘develop players to prepare them for senior football’, however, come about round 12 it is changed to ‘calling every past player to ever play for the club to help make up the numbers’.

Brincat knows this reality better than anyone, having gone through arguably the greatest baptism of fire for any reserves coach, or coach for that matter, as coach of the Gormandale seconds in 2019.

That year, the Tigers lost 17 of 18 games, but had 18 moral victories in not forfeiting a match.

In what must surely be a record, the North Gippsland club came close to cracking the ton for players used in a season, with 99 different people pulling on the boots at some stage.

“I became a black belt in adaptation in my time at Gormandale,” Brincat said cheekily.

“We lost some players a little bit too late to replace them so then it became just scrambling. We were having our meetings Tuesday night to pick teams because we knew how much it was going to change. From Tuesday to Friday night I was just calling blokes, firstly introducing myself saying ‘hey do you want to come and play footy for me?’ and managed to put a team out on the park every week … so I’m fairly prepared.”

Wilson will be coaching in a slightly different environment, calling the shots for Moe in the major Gippsland League.

Where generally reserve grade games have a handful of players over a certain age and weight division, the higher population of towns in the Gippsland League means the reserves competition is a decent standard, so much so it would not be too controversial to suggest there would be Gippsland League second teams that would beat minor league senior sides.

“You have to look at some of the senior sides and the recruitment and development that they have of their juniors just to see that they have some really quality guys unable to break into the senior team. The important thing is that those guys that can’t break into the senior team are still really hungry to develop and work on their craft. They don’t see the reserves as necessarily a negative thing they see it as an opportunity to try and work on themselves and become better players.

“Twos is an opportunity for you to maybe get more of an opportunity in a position of your strength that you don’t necessarily do in senior grade. A lot of the problem you see is that younger 18, 19, 20 year old kids who have a sense of entitlement and believe that just because they were good as a junior that they should be a senior footballer and that is not the case at all, particularly at Gippsland League level.

“It’s really important the younger generation understands that you have to do your due diligence and work on yourself and develop and by the time you get to 23-24 is when you really start to hit your peak as a footballer.”

Any youngster who finds themselves with the second picked team for an extended number of weeks can take a leaf out of any number of success stories of players who have built their careers up from the reserves.

Shaun Hart played in a reserve grade premiership with the Brisbane Bears in 1991, avoided the axe that same season and was a Norm Smith medallist 10 years later.

Robert DiPierdomenico served the ultimate apprenticeship at Hawthorn – playing 99 games in the seconds before going on to win a Brownlow Medal.

On playing 99 games in the reserves Dipper famously quipped “I wasn’t good enough to play 100”.

At local level, Leongatha took the praiseworthy step of even making Tom Marriott come back from injury through the seconds less than a year after he won the 2018 Gippsland League senior league best and fairest by 11 votes.

Regardless of who is playing however, reserve grade games can often be low scoring, even in perfect conditions, something Wilson believed came down to a few factors.

“Reserve grades you have your top three or four players for any team that stands out and the drop away that you can have due to numbers can make the gap between your best and your worst quite significant,” he said.

“The teams that generally seem to score the best have a really good balance between who their best player is and who their 22nd picked player is, and in country footy we don’t have any rules where you can flood the backline if we’re starting to get a few kicked on us.”

It is not only flooding where the rule book can be exploited in the seconds, with players pushing the concept of fair play right to the edge.

Those needing to kill time can do so by running into an open goal and launching the ball into the car park knowing the clock will keep running, while conversely, a player can boot the ball back to the centre after a goal to give their team more time to get their percentage up.

With the new season not far away, the excitement for reserve grade players may well outshine their senior counterparts, considering no one gets paid to play in the seconds.

Every true reserves player needs their moment in the sun because of this.

They deserve it for having to suffer everything that goes with playing in the reserves.

From getting to the game and finding out six blokes have pulled out, to playing shortened quarters so the seniors can start on time, to subconsciously knowing no one really cares if the seconds win or lose.

Those who have never played in the reserves will never truly know what it is like.

It takes a special person to drive to Bairnsdale or Wonthaggi to play a game of twos footy.