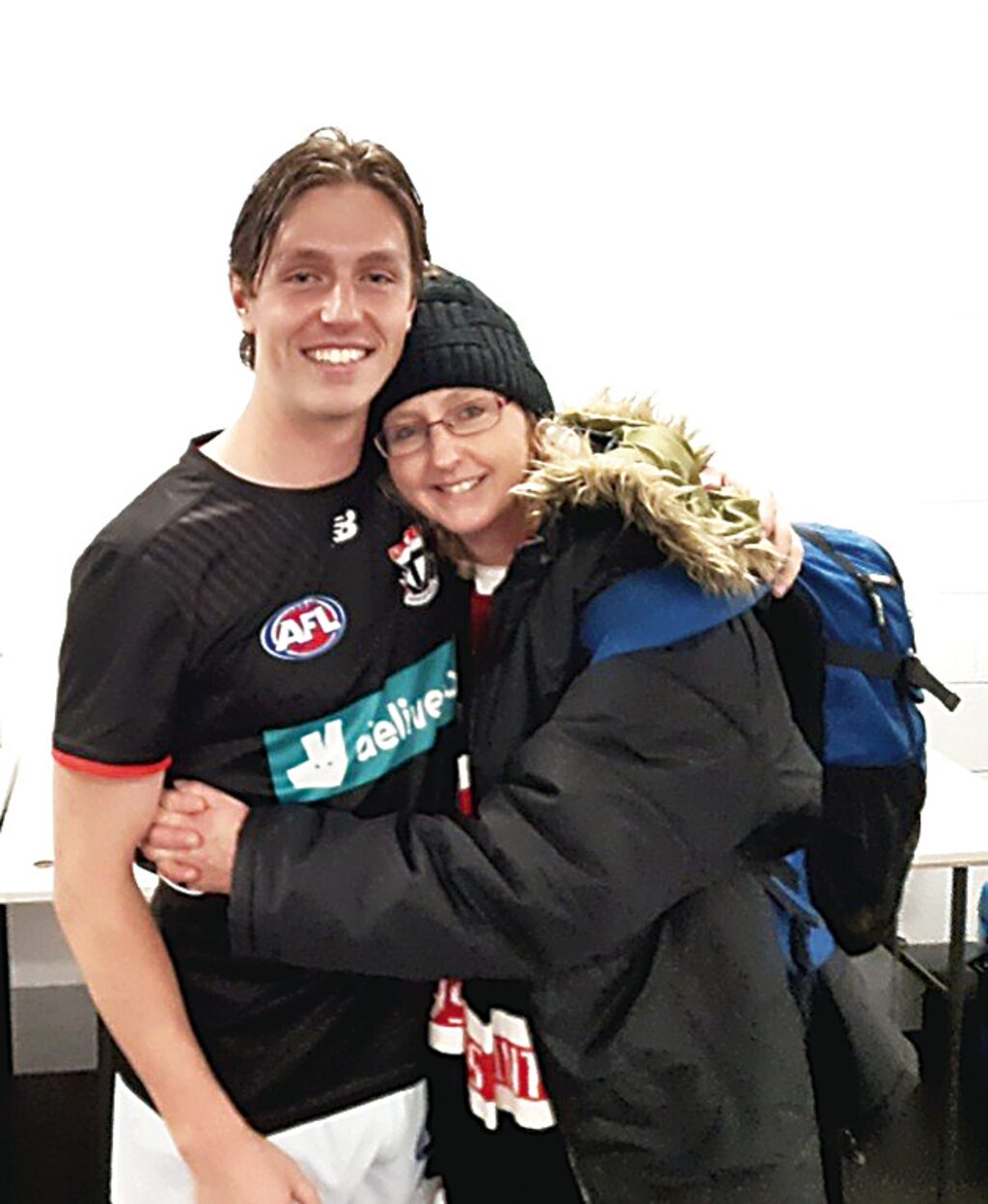 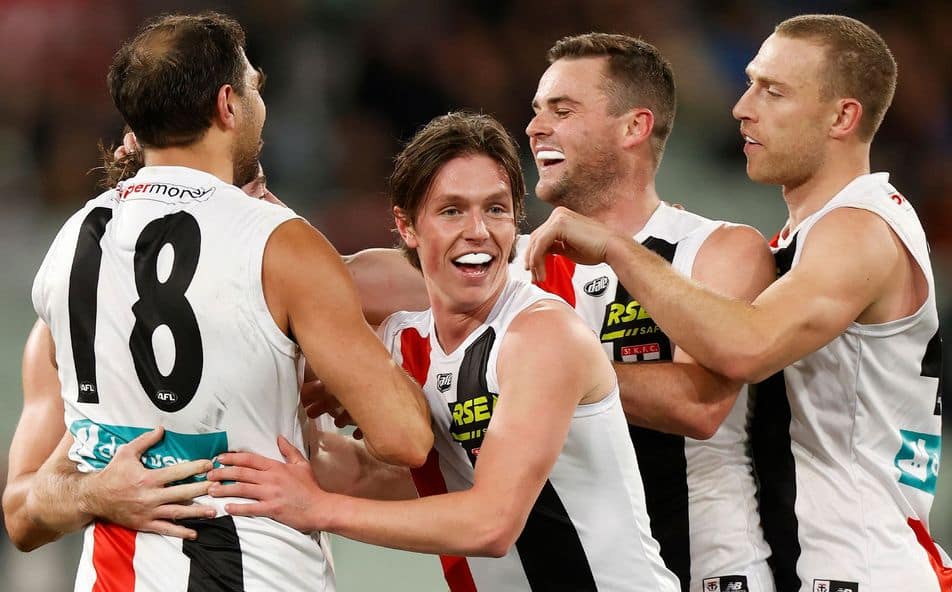 In what was something of a surprise debut, Connolly was named medical sub for St Kilda as a late inclusion for the injured Jack Billings.

Connolly came on in the third quarter against Richmond at the MCG, getting his chance when Nick Coffield was subbed out with a hamstring injury.

The former Moe player finished the game with 11 disposals and seven marks as the Saints recorded a 40-point victory over the reigning premier.

Having been emergency for a few weeks prior, Connolly’s selection completed a remarkable turnaround, as in the space of a few hours he went from on the couch to the middle of one of the world’s biggest stadiums.

“I was playing FIFA in the morning and Ratts (coach Brett Ratten) gave me a call and said that JB (Jack Billings) was still pretty sore and that I might be playing,” he explained.

“I heard a few things from some of the boys during the day that JB was fairly unlikely to play. It was weird in a way, I felt like I was going to play but at the same time I thought JB would be able to get through the warmup.

“I mentally prepared to play throughout the day just in case I did have to, so it wasn’t a rude shock if I was. I wanted to try and stay feeling as though I was playing just in case.”

With half an hour to go before running out, Connolly’s dream of playing in the AFL was realised when Billings ruled himself out.

As medical sub, Connolly got his strapping done as usual and completed the warm up, and was also required to do additional running at quarter time and half-time.

While players are usually given a jumper presentation on debut, the lateness of Connolly’s call-up meant there simply wasn’t enough time.

Wearing the number 37, the same number St Kilda legend Tony Lockett started his career in, Connolly waited anxiously on the sidelines for his opportunity.

“I was ready to come on and I felt I was going to be able to impact the game. I think being able to prep during the day helped,” he said.

“I was told just to warm up as Coffield went down into the rooms. After I got up and started running along the sidelines I couldn’t really stop because I was that nervous, I didn’t want to sit down because I couldn’t sit still.”

Connolly was told halfway through the third quarter that he would be going onto the ground, and before too long stepped foot onto the hallowed MCG turf.

Coming onto the ground with the Saints holding a decent lead, Connolly made his presence felt early, taking the game on with a running bounce.

Speaking of the experience, Connolly said it was a dream come true.

“It was unreal … Friday night against the reigning premiers, at the G, up by five goals when I ran out there … it’s probably the best moment of my life,” he said.

“It was a lot quicker than what I’ve ever played in but it was good that I came on when we were in control, I think that really helped me out a lot.

“I thought we had a good week-and-a-half preparation, we really executed well and I think it showed.

“How we played was exactly how we want to play, it wasn’t particularly pretty, but gets the job done and wins you games. It’s good to see that we can actually play that way and hopefully we can finish the season off like that.”

Playing predominately in defence, Connolly said he was also called on to perform other roles.
“We had Jack Sinclair and Brad Hill playing in the higher tier because they wanted to keep them up there, running up and down the ground,” he said.

“As soon as Coffs (Coffield) went down I got a phone call from upstairs to play a little bit deeper than I usually would just to allow them to keep doing their thing but if those guys went off I’d have to slide up.”

During the match the running defender also rubbed shoulders with some high profile opponents like Dustin Martin, Trent Cotchin and Jack Riewoldt.

“That was bizarre, there was a moment where we cleared the ball out of our defensive 50 and Martin was just running up the field and Dougal Howard said ‘Leo go and follow Martin’, so running alongside him was interesting,” he said.

Connolly also showed he was not afraid to stand up for himself, shoving Richmond player Liam Baker – who then asked who he was.

Come siren time, it was appropriate Traralgon’s Tim Membrey and Connolly embraced – a moment he said he would never forget.

“During the game I didn’t have time to soak it in. As soon as the siren went I went up to Tim Membrey, he said to me ‘how good is this? First game, Gippy boys on the G’… that’s when it really hit me,” he said.

Fortunately, Connolly’s family was able to get to the game, after being given the early word he might be playing.

“It was really good to see them after the game. Mum was pretty emotional, I think dad was even pretty close to shedding a tear which is a first,” Leo said.

In a true showing of professional sport, Connolly’s debut was quickly yesterday’s news, as he had to complete extra running with St Kilda just 11 hours after the match finished because of the decreased load as medical sub.

Having grown up in Trafalgar, Connolly has not let the bright lights of AFL fame get to his head after being taken in the 2019 draft.

He still keeps close tabs with friends back home and even plays the odd game of cricket during summer for the Trafalgar Cricket Club.

Now that he has played one game that can never be taken off him, Connolly said his sights were now set on even bigger things.

“I’ll take this one but hopefully this is the start of a long career. I think I’ve had a good last couple of months of footy, I feel like I’m ready to put my name out there on the big stage.”