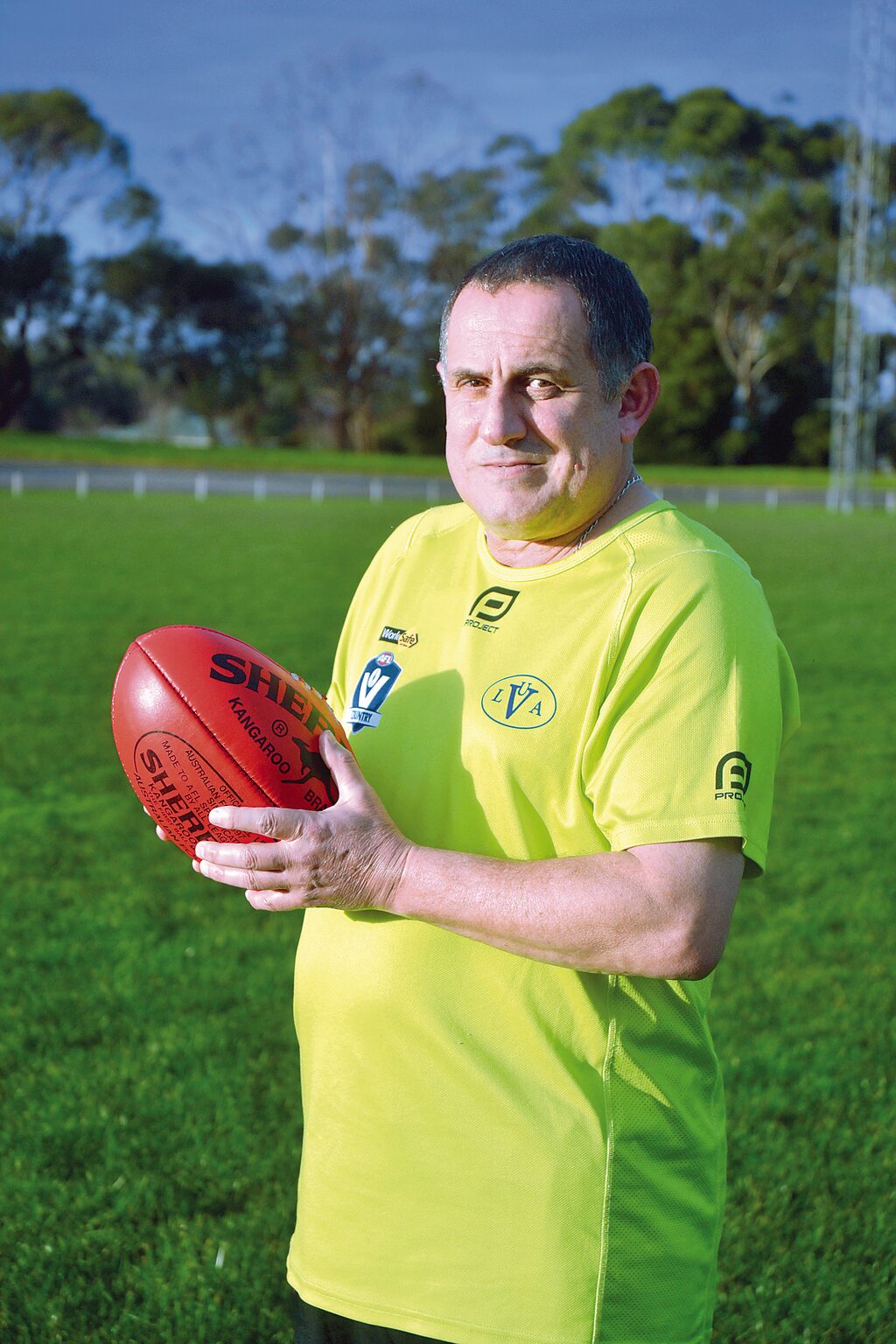 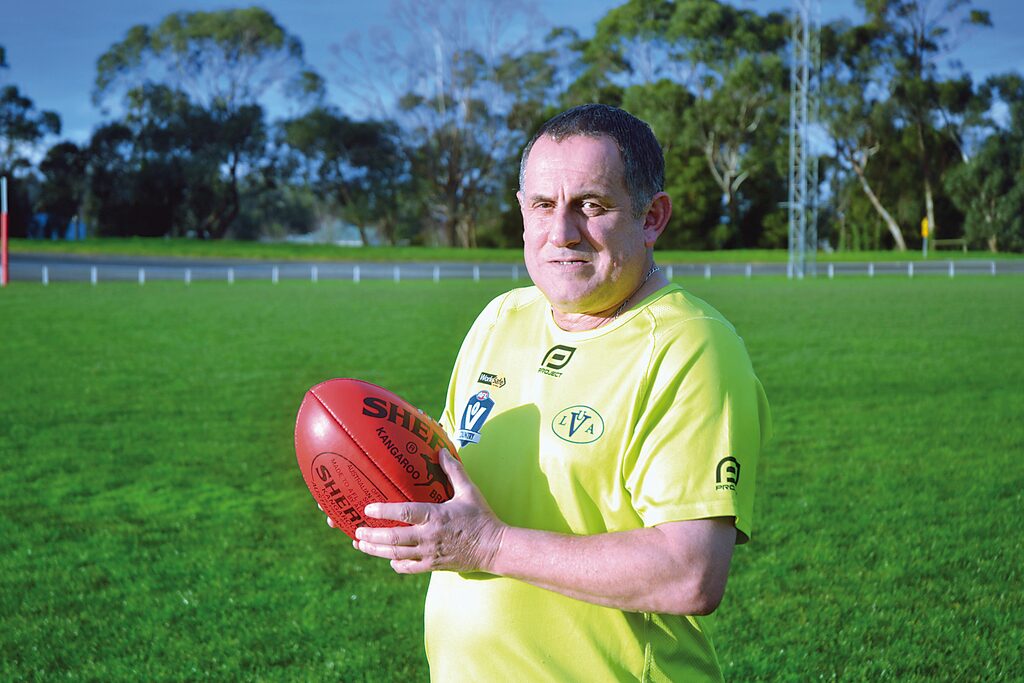 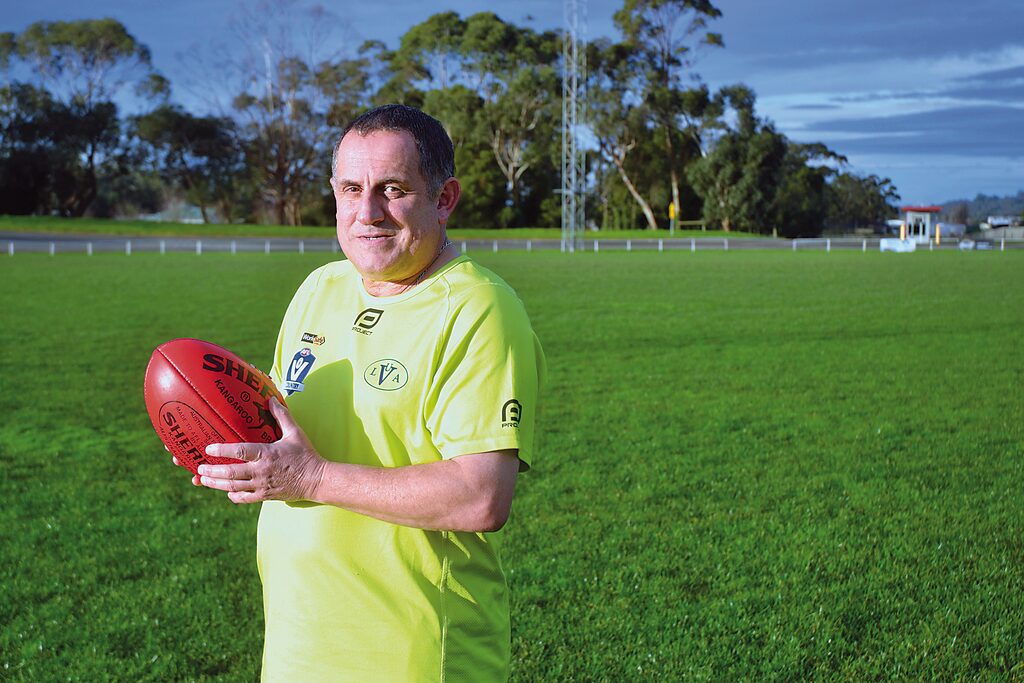 FOOTBALL
By LIAM DURKIN
LATROBE Valley football umpiring legend Steve Buhagiar will tick off another milestone in his decorated career this weekend.
While triple figure milestones are more commonly seen in the football world by players and officials, Buhagiar will well and truly surpass that when he runs out for game number 1000.
Affectionately known by all in local football as ‘Budgie’, the Latrobe Valley Umpires Association stalwart’s longevity has been remarkable.
He ran his first game as a field umpire way back in 1984, and of the 999 games so far, 23 have been grand finals with 16 senior deciders in that lot.
As Buhagiar explained, his foray into umpiring stemmed from nothing more than a passing comment.
“I couldn’t get a game of football and someone said ‘come and try umpiring’,” he said.
“I started with six games to go in the season. I thought ‘I like this’ and I kept going and haven’t looked back after 36 years.”
Across nearly four decades Buhagiar has seen the football landscape change dramatically. “When I first started it was one umpire, we used to bounce the ball, we’d go to Maryvale, Toongabbie, all the way to North Gippy … just one umpire games in those days was very hard,” he said.
As well as umpiring grand finals, Buhagiar pointed to country championship carnivals during the heyday of the Latrobe Valley Football League in the early 1990s as highlights, as well as running alongside umpires from the big league.
“I umpired a game before the night grand final – Hawthorn versus North Melbourne back in 91′ at Waverley,” he said.
“As time went on we got to umpire with the VFL umpires, they’d come down from Melbourne so I got to umpire with Peter Cameron
sometimes, they taught you things.”
When asked what it took to be a good umpire, Buhagiar said fitness and concentration were some of the keys.
“Be confident with what you do, when you blow the whistle you’re not going to change your mind – be confident with what you’ve paid,” he said.
“You’ve got a job to do and every week is different. Some days you have a really good game, others not so much”.
Buhagiar’s fitness has been a hallmark of his career, as amazingly, he once covered 22 kilometres in a game.
A fitter and turner by trade, his services to the Latrobe Valley Umpires Association was formally recognised some time ago with the bestowing of life membership.
Buhagiar said it was the camaraderie of the umpiring fraternity and the football community that kept him going.
“There are a lot of good people around there, it is no different to a football club (the umpires), just good people … love being around them,” he said.
Over the years he has worked alongside some of the greats of local umpires, and wished to acknowledge the contributions of Allan Haines, Dave Esler and Les Ponton.
As he is turning 58 later this year, Buhagiar reckons he doesn’t have too many years left in him. He is currently second on the all-time games tally at Latrobe Valley Umpires, and said he was happy to sit behind Don Wight, who is coming up to a lazy 1300 games.
“I’ve got no intention of catching him,” Buhagiar said laughingly.
Fittingly, Buhagiar will umpire the game between Yinnar and Fish Creek in the Mid Gippsland Football-Netball League this weekend. The game will link the generations somewhat as his first senior game in 1986 was between Yinnar and Thorpdale.
The Latrobe Valley Umpires Association will toast Buhagiar on Saturday night at the Morwell Bowling Club, where singer-songwriter Greg Champion will be a guest speaker.
Celebrations are set to kick on the following day at the Latrobe Valley Umpire headquarters at Peter Siddle Oval.