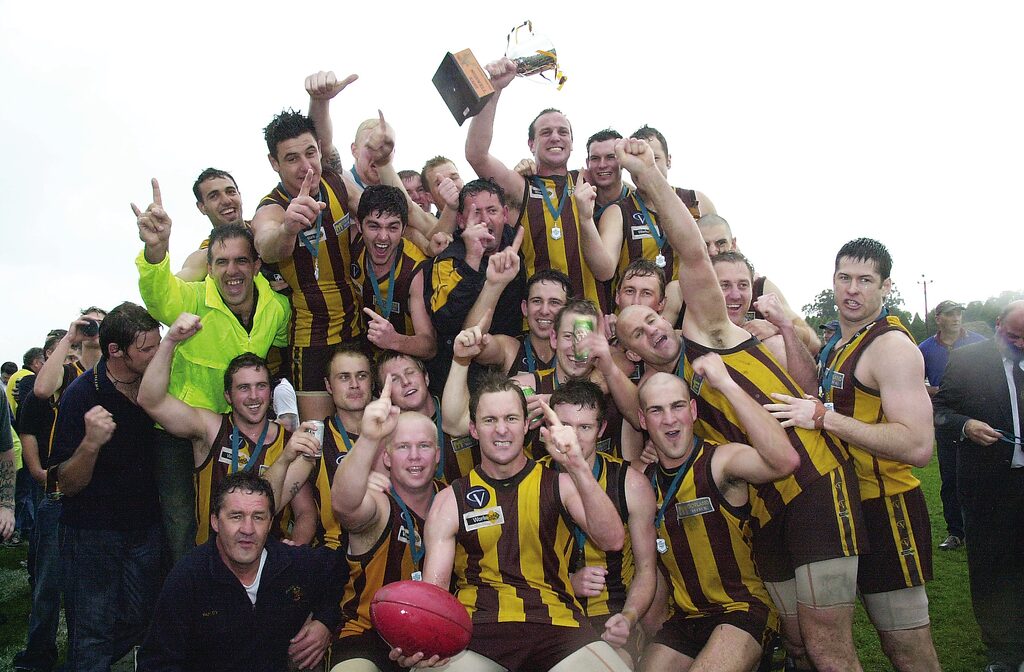 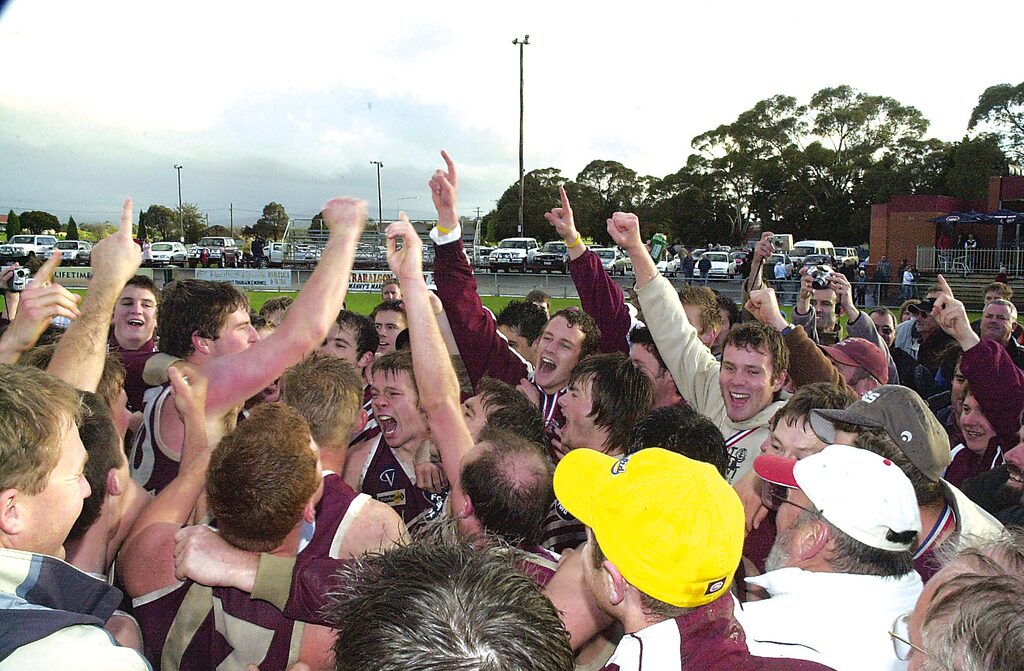 THIS week would have been Gippsland League grand final week.
A grand final for any league is undoubtedly the biggest day on the football calendar, and those who have been to a decider in either the Gippsland, Mid Gippsland or North Gippsland league will attest to the carnival-like atmosphere as thousands of people converge to see the last game of the season.
Everything is just bigger for a grand final. There’s the build-up during the week, the banners as the teams run out, and the emotion as the final siren is blown.
With grand finals in mind, the Four Quarters team thought it would take a look at some of the great Gippsland grand finals in recent memory.

1. Traralgon 2005.
IT was a result no one saw coming.
Of the 20 Gippsland League senior premierships Traralgon has won, the 2005 victory is arguably its greatest.
The Maroons have had better and more dominate teams before and since, but for a truly magical against the odds triumph, there can surely be nothing that compares to what they managed to pull off on September, 17 2005.
Even beyond Traralgon it is one of the most famous grand final victories in Gippsland football history
To understand the significance of the Maroons 2005 grand final win, one has to firstly appreciate what they were opposed to.
Maffra had won the previous three premierships and by grand final day appeared a near certainty of writing themselves into the history books as the first Gippsland League team to win a quartet of flags.
The signs could not have been more ominous. The Eagles went into the decider with a league record 45 consecutive wins under their belt, and had beaten Traralgon by 64, 51 and 81 points in their previous three encounters – the 81-point margin coming in the second semi-final just a fortnight earlier.
In that game alone Maffra kicked 11 goals in the last quarter.
Many believed the trophy engraver could have put the Eagles name on the cup there and then. Not since Phar Lap had there been a hotter favourite, and just like Phar Lap, Maffra was the best competitor by the length of the Flemington straight.
The odds for the grand final pointed to an impossible Traralgon victory.
But then, something happened – it rained on the Friday night.
Rain carried over to grand final day, and continued to fall throughout.
Conditions may well have been best summed up in the Thirds match, as Sale defeated Maffra in a scoreline of 2.4 (16) to 0.2 (2).
By the time the seniors started it was clear the game was going to be an old-school slog.
Traralgon stayed with Maffra in the first quarter, before taking a handy nine point lead at the main break.
With the sniff of an upset, the Maroons carried on in the second half and was 16 points ahead with one quarter to play.
From there, Traralgon was able to fend off some nervy moments early in the last, before Dane McGennisken booted the sealer with five minutes remaining.
A goal to Jarrod Zuehlke from the goal square courtesy of two 50 metre penalties then made sure of it.
The end result: a 23-point win to Traralgon. A result that shocked even the most diehard Maroons supporters.
An emotional coach Tony Lane told players and supporters he “couldn’t be prouder” following the win.

2. Morwell East 2005.
THE year 2005 proved to be a season for the underdogs.
As well as Traralgon in the Gippsland League, Morwell East overcame incredible odds to win the Mid Gippsland Football-Netball League premiership.
The Hawks had only won two flags prior to 2005, with both coming one after the other in 1979 and 1980.
Supporters and players were more than likely entertaining thoughts of ‘how many more?’ during the back-to-back celebrations, but little was anyone to know the wait they would endure before they again reached the premiership dais.
Come 2005 Morwell East looked to be a good show, yet there was one thing standing in their way – Yinnar.
The Magpies went through the regular season undefeated, and then accounted for Morwell East by 29 points in the second semi-final, although even that margin may have flattered them as Yinnar registered 30 scoring shots to 16.
Grand final day however produced a different result, and with Danny Millar as coach, the Hawks put it all together on the big stage to win 11.5 (71) to 6.8 (44).
Morwell East 300 gamer Brad Gibson remembered it fondly.
“It was absolutely huge, it’s something I won’t forget,” he said.
“After winning the prelim by 10 points to sneak in we had a pretty good day in the grand final.
“You still see the blokes you played with every now and again, it was a pretty special day for the club.”
The 2005 premiership ignited some boom years for Morwell East, as the Hawks played in three more senior grand finals during the next five seasons.
Gibson said this was his most enjoyable time.
“It was a very successful period for the club, the seniors were probably unlucky to miss a couple through those times but it was probably the brightest patch for a while,” he said.
“We had a lot of good players and there was exceptional depth back then, some of those players in the twos teams could have been playing senior footy but it was very tough to crack into the senior team in that four-five year period from 2005 to 2011.”
The 2005 flag remains the Hawks last senior title to this day.

3. Rosedale 2001.
THE 2001 North Gippsland Football-Netball League grand final took on heightened emotions, but for reasons much bigger than football.
Just four days before the grand final between Rosedale and Churchill, shockwaves reverberated around the world following the September 11 attacks.
With the grand final paling in significance to what was happening overseas, Rosedale captain at the time Cameron Mayne said it was a surreal experience.
“It went from football talk on the Tuesday night (at training) to ‘that’ talk,” he said.
“It definitely made people think leading up to it.
“We had a minute silence at the grand final; it put things in perspective a fair bit, to realise how lucky you are to be doing what we were doing.”
As the teams stood shoulder-to-shoulder, the national anthem and minute’s silence which followed is believed to be one of the most emotionally stirring moments in NGFNL history. The Blues were out to break a 36-year premiership drought, and after finishing the season on top of the ladder, went straight through to the decider by winning the second semi-final.
Rosedale made use of a howling breeze heading toward the scoreboard end at the Traralgon Showgrounds in the first quarter of the grand final, and kept Churchill goal-less in the first half.
Amazingly, the Cougars kicked 12 behinds before scoring a goal, but made some running in the third, and at three quarter time the margin was only 17 points, with Rosedale ahead 10.8 (68) to 6.15 (51).
The Blues ultimately kicked away in the end to run out 58-point victors, 17.10 (112) to 6.18 (54).
Such was the significance of Rosedale’s premiership win, some took it upon themselves to properly mark the occasion.
Drivers entering Rosedale will still see ‘NGFL premiers for 2001’ written on the sign welcoming motorists into the town, while local baker Rex Sheehan even created a wood sculpture of winning coach Anthony Dessent.
The creation resurfaced some time ago after many years in the wilderness.

4. Stony Creek 2009.
IT is not often someone is celebrated for spoiling a going away party, but that was indeed the case for Stony Creek in 2009.
The Lions ensured Wonthaggi Power didn’t leave the Alberton Football-Netball League with the premiership cup before crossing to the Gippsland League the following season.
The timeline of events that led to the Power’s exit from the AFNL is a story for another day, but in a nutshell, it came about following the merger of Wonthaggi Rovers and Wonthaggi Blues in 2005.
The merged entity initially competed in the AFNL, but was eventually ordered to move to the Gippsland League by the Victorian Country Football League as it was deemed to be too powerful to compete against clubs from smaller towns.
Wonthaggi was given the 2009 season as its last in Alberton, and looked set to go out on a high after finishing the season on top to advance to a fifth successive grand final.
By contrast, Stony Creek had taken the long way, winning three sudden death finals just to qualify – the first semi by only seven points against Yarram.
Understandably, most pundits believed Wonthaggi would be too strong for little old Stony Creek. After all, the reason the Power was leaving was because they were ‘too good for Alberton’.
Taking the role of David, the only favouritism Stony Creek had was that of sentimental favourites as they lined up for battle against Goliath.
Yet in a day for the underdogs, the Lions produced a sterling performance to do its Lions moniker justice, winning 14.10 (94) to 11.14 (80).
By all reports the noise at Foster that day was absolutely deafening.
The win also secured Stony Creek’s first premiership since 1983.
Did we get it right?
Let our newsroom know at sport@lvexpress.com.au