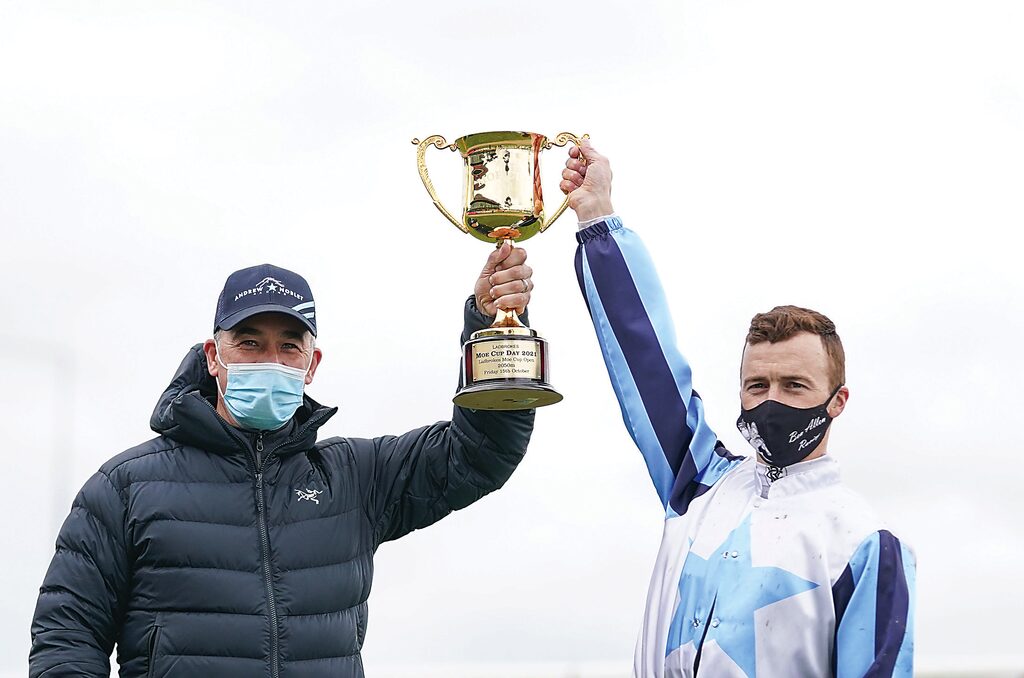 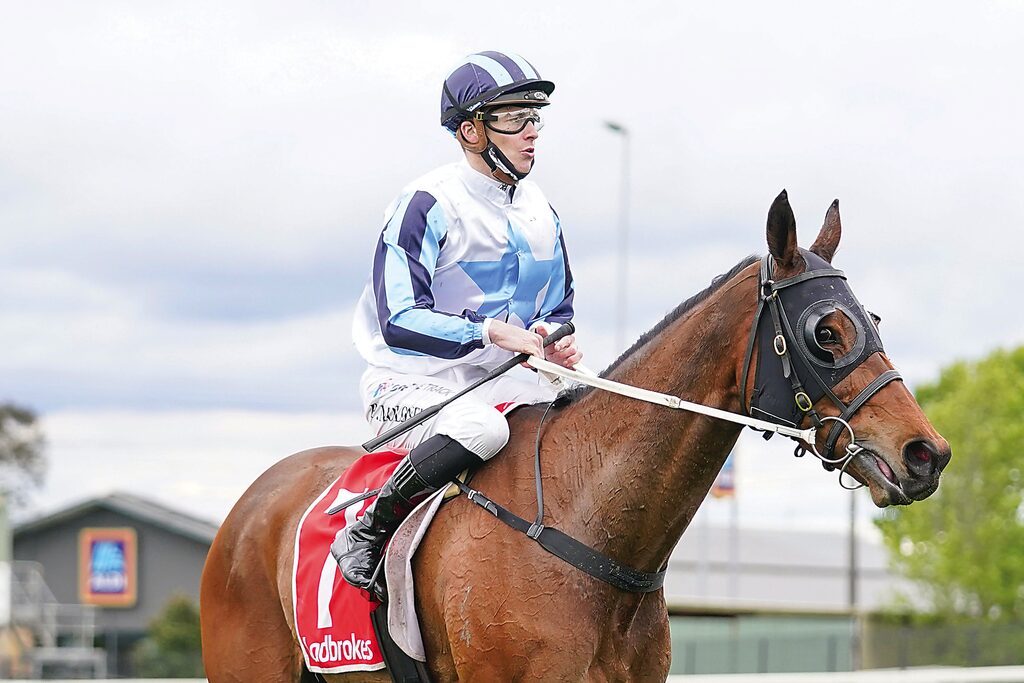 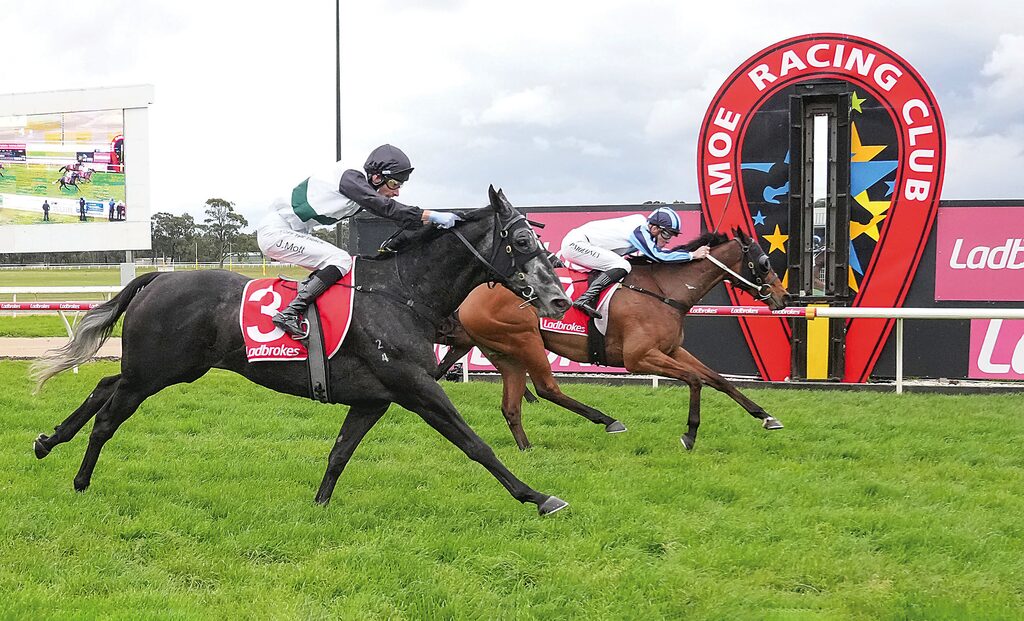 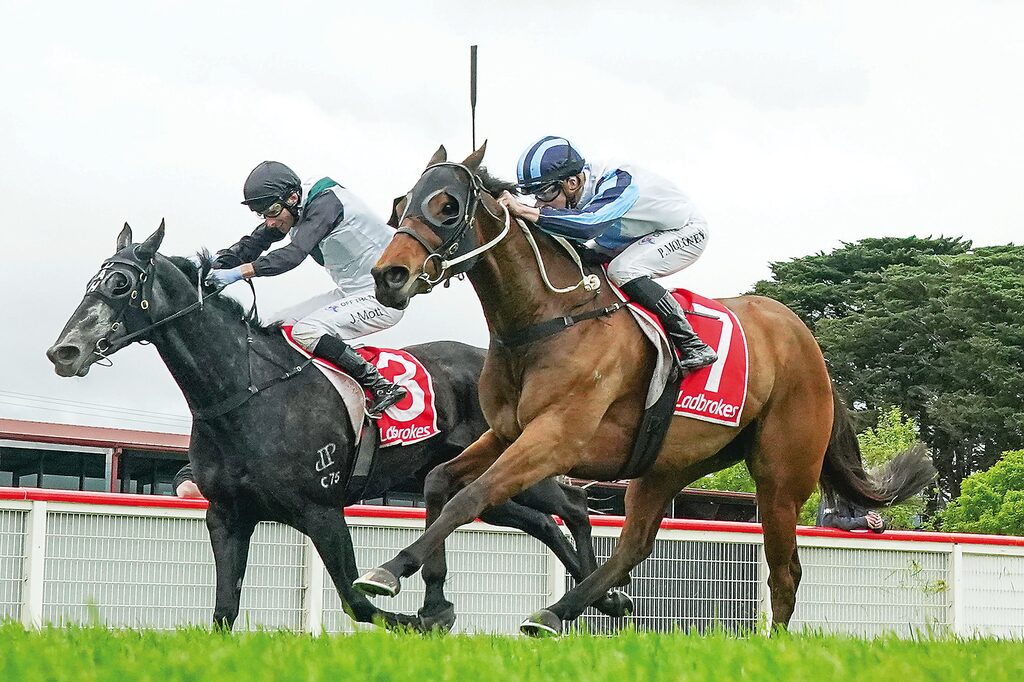 HORSE RACING
By LIAM DURKIN
BALLARAT mare Ghodeleine produced a lionhearted performance to secure the $130,000 Ladbrokes Moe Cup (2050m) on Friday.
The Andrew Noblet-trained seven-year-old called on every last sinew of strength following a wide run throughout to defeat Dark Dream by a neck.
Winning jockey Patrick Moloney paid tribute to the daughter of Monaco Consul, who secured the biggest win of her 27-start career.
“I didn’t give her the best ride, but she was the best horse in the race and won well,” Moloney said post-race.
“We were exposed for the majority of the race, but I got on the back of Good Idea and he took us into the race.
“She is a tough, fit, honest mare in form. All credit to her.”
Having drawn barrier eight in the nine-horse field, Ghodeleine was trapped three deep after being unable to find cover heading out of the straight for the first time.
Despite covering extra ground in the run, the $2.25 favourite travelled sweetly into the race at the home turn.
Dark Dream, the former Hong Kong galloper, belied its $26 starting price to issue the major challenge, storming home to go down by a head.
The seven-year-old gelding bumped fourth placed finisher Aussie Nugget during the race, and jockey Jamie Mott was reprimanded for using his whip in consecutive strides prior to 100m.
Coming in third was Good Idea for Pakenham trainer Phillip Stokes.
The seven-year-old gelding, who won the Adelaide Cup in March, gave punters good odds at $11, in what ended up being its second minor placing in as many starts.
But you could take nothing away from the
victor, who has now banked connections $309,200 in prizemoney earnings.
Ghodeleine has been in sublime form of late, with its last seven starts returning three wins, two placings and two top-five finishes.
Winning trainer Noblet said he felt this strong form and suitability to conditions at Moe helped the mare achieve victory.
“I thought she performed well, didn’t have much luck in the run but was very brave,” he said.
“Halfway round I was worried, but she’s a few runs in now and very fit, which held her in good stead at the finish.
“We pulled the right rein to find the right race, congratulations to all the owners, I’m very happy for all of them.”
Noblet said the Group 2 Matriarch Stakes at Flemington or Ballarat Cup would be the next likely target for Ghodeleine.
Moe trainers Allison Bennett and Charlie Gafa carried local hopes with Monmouth and Heartland Raider taking part.
The pair finished fifth and seventh respectively, unable to keep touch with the leaders as the field widened heading for home.
It was a case of deja vu for Heartland Raider, who finished seventh in the Moe Cup last year.