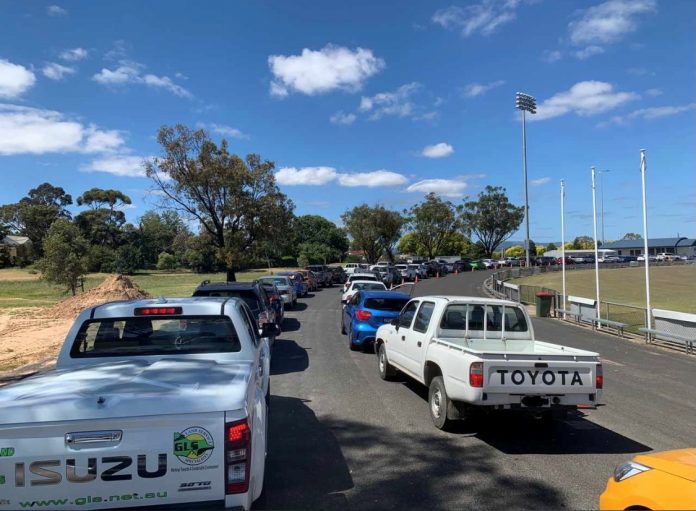 OF the 365 days in a year, the majority unfold without any great surprises.

Tuesday, December 28 2021 gave no indication to me to appear as if it would be anything other than a regular working day.

The pages for The Express to be delivered the next day were as good as complete, and all seemed in readiness to simply ride into the Morwell office to put the finishing touches on another piece of local art.

A solemn text message however immediately derailed any chance of that:

This is a message from the Victorian Department of Health.

Dear Liam,
You may have been exposed to COVID-19 at ‘said’ location.
If you are a customer/patron that has visited this venue you are required to get
a COVID-19 PCR test.

With that, and after an initial three word mumbling starting with the letter F, I made a
few phone calls to see that The Express ship would keep sailing and headed off to Traralgon Recreation Reserve to get tested.

I left home in Traralgon just after 8am with thoughts that I would be in and out of the testing site in no more than an hour.

How wrong I was.

When I arrived the queue was already out the gate and onto Howitt Street.

Cars were lined in single file along both sides of the street, with traffic slowly but surely making its way into the venue.

The journalist in me knew I was ideally situated for a photo opportunity, so while the traffic wasn’t moving I climbed on top of my car, surely raising a few eyebrows, to take a snap of the line of cars in front.

Once inside, drivers were required to scan a code linking them to an online questionnaire.
Despite the wait, I had enough to keep me occupied, trying to negotiate putting pages of
a newspaper together, and more importantly, watching and listening to the third day of the
Boxing Day test.

As the line of cars moved further along the Traralgon Recreation Reserve, eventually making its way up a small hill on the outskirts of the football oval, the end of the queue was at least within eyesight.

At this point, the single file line split in two, although the driver of a white Peugeot, thinking no one would mind if they went off road to jump out from the single lane to a space well before it was clear the second line started, clearly didn’t count on feeling the wrath of one particularly irate driver, who justifiably exited their own vehicle to let them know what they thought.

For all but one person in line doing the right thing, it was legs out the car window as the waiting game continued.

The ripple effect of how delays happen was evident by the number of times a huge gap was
established in the queue by drivers who had perhaps dozed off.

I myself became momentarily anxious at the thought I was holding everyone up, as on one
occasion my cars push start ignition decided not to turn over because the system could not locate where the remote keys were.

After that mild panic attack I continued working as best I could on pages for The Express.

It was improvisation in its fullest sense given I had to have PDFs sent to my phone, then get on FaceTime with fellow journalist Alyssa Fritzlaff in Morwell to virtually walk through corrections and then have her send the pages out.

While all this was happening I quickly flicked back to the cricket to see what the latest was.

If I thought the line of people arriving to get tested was surprising, what had happened at the MCG was completely mind blowing.

Sure enough, the Aussies had the Ashes wrapped up before midday.

An hour and 15 minutes after Australia had taken the winning wicket I was leaving the testing site.

About five hours I had waited, but I did make a point of saying to those working on site that they were doing a great job – for they were, and I would defy anyone to work better in the situation they are in.

I spent a day-and-a-half in quarantine before getting the all clear.

If COVID has taught us anything it is resilience and to think on the fly.

Who would have thought the front and final two sport pages of last Wednesday’s edition of
The Express was put together from the driver’s seat of a car?

The Ashes has been a humiliating series for England.

Of all their embarrassments, surely nothing tops this: it took Australia less time to win the Ashes than it did for me to come back COVID-negative.