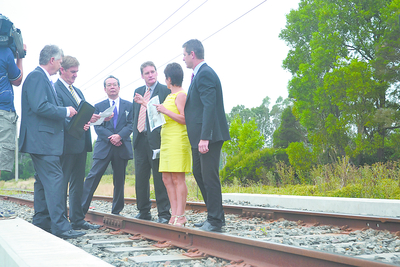 Major infrastructure upgrades have been completed at Australian Paper’s Maryvale Mill, as it sures up production and economic efficiency in an uncertain manufacturing marketplace.

Upgrades to a strategic transport rail bridge used for bulk rail freight, and the installation of a new sewer temperature control unit have been rolled out as part of wider $10 million infrastructure upgrade, the latter of which Australian Paper said will save up to 783 megalitres of water per annum.

Officially announcing the completion of the projects on Friday, Deputy Premier Peter Ryan said he was “fiercely proud” of the company, which received $2.39 million towards the project under the State Government’s Regional Development Fund last year.

“This project is reflective of the fact these things can get done … we are keen to support investment in Victoria, but we are more attracted to assist those that will reinvest into their own enterprise,” Mr Ryan said.

Speaking against the backdrop of an uncertain manufacturing future, with up to 600 jobs under review at Alcoa’s Geelong aluminium smelter, Mr Ryan said while the sector was facing serious challenges, the issue had been blown out of proportion by ‘naysayers’ in the media.

“The whole (manufacturing) discussion needs to be reconsidered …. commentators in the media tend to focus on downsides, but there are some great opportunities in Victoria and the media needs to come on board.”

“I can assure you it’s not a beat up; he should come travelling around the countryside with me for a couple of days; government has responsibility in assisting manufacturing to ensure it’s survival,” Mr Diehm said.

Speaking during a current plant shut down, Australian Paper chief executive Jim Henneberry said the continuing efficiency upgrades being implemented by company put it in a good position to weather the “considerable challenges” it faced, such as the strong Australia dollar’s impact on the export side of the business.

Mr Ryan said the upgrades would help “significantly reduce the company’s environmental footprint”, as one of the largest producers of office paper in the nation, and “one of Victoria’s largest industrial users of water and natural gas”.