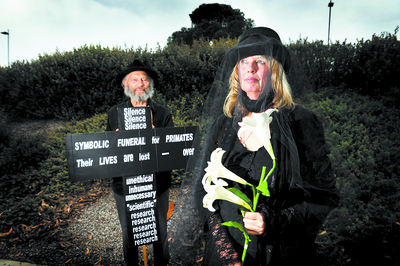 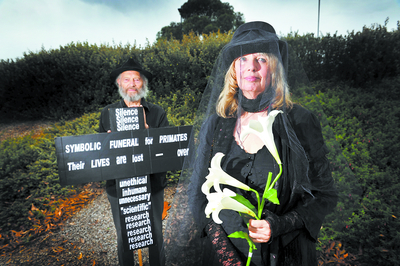 After discovering a facility existed in Churchill which housed macaque monkeys, Lyndel Thomas staged the protest aiming to spread public awareness about the “cruelty to animals” breeding facility.

She said she was seeking support to ban the breeding and importation of primates to Australia for research purposes.

“Australian researchers should be using non-animal methodologies that are far more relevant to studying human disease rather than trying to replicate a disease in a species that is genetically different to our own and expecting to achieve accurate or indicative results for humans,” Ms Thomas said.

She said apart from “the obvious ethical argument”, there was a lack of transparency regarding the purpose of these research centres.

“Only after approval from their AEC may the project commence,” the website stated.

However, Ms Thomas said there was no independent review system in place to ensure the breeding and research facilities were adhering to this policy.

“The problem here is that the committee is associated with the research facility/department so no independent review takes place and there is no-one on the committee who is really there to advocate the animal’s rights and interests,” she said.

“There are other ways to do medical research now, many universities in America and United Kingdom have now stopped using animals for research,” she said.

Ms Thomas said the silent protest, symbolic of animals inability to speak for themselves, aimed to make the public aware of the research centres in Australia.

“It is a symbolic funeral and a silent vigil in honour of the macaques and marmosets who have died and whose lives are lost during the course of unethical, inhumane and unnecessary, scientific research,” she said.

The Express attempted to speak to Monash University animal services but they did not respond by publication deadline.