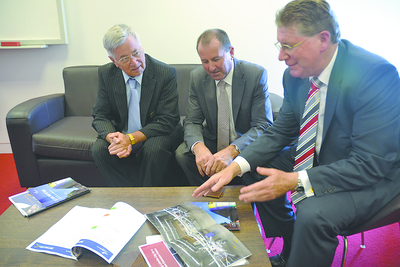 Dedicated transport infrastructure connecting Gippsland to Port Hastings would be built in tandem with major brown coal projects as they emerged, according to a State Government minister.

In a meeting at Latrobe City Council headquarters on Tuesday, State Regional Cities Minister Denis Napthine discussed concerns regarding the ability of the region’s road and rail network to service major projects expected to emerge in the Valley over the next decade.

Mr Napthine said the development of Port Hastings, on the western shores of Westernport Bay, as a major container facility, was being ‘fast-tracked’ for completion by 2025 to ease pressure on Port Melbourne, which was operating at close to capacity.

The discussions with the minister came at the request of Latrobe City, which questioned how the federal and state governments intended to move containers and bulk products by B-double and rail between Gippsland and Hastings, after a proposed rail line between Port Hastings and Gippsland was abandoned.

Mr Napthine said the projected volumes of containers coming to and from Gippsland would not justify a dedicated route, and it would be “presumptuous” to put in rail links without a major project in development to “back them up”.

“We do not want to build a white elephant; we want something to support the needs of a dedicated export project,” Mr Napthine said.

“Rather than saying ‘let’s put this route in or that’, and hope someone will use it in future, let’s determine what project we are talking about, what the opportunities are, and develop the appropriate logistics.”

Mr Napthine alluded to a raft of potential commodities which could be exported from the Latrobe Valley, including magnesium and dried and ‘slurried’ coal – a product being pursued by ‘clean coal’ technology developer Exergen – which could be transported through pipelines.

State Member for Narracan Gary Blackwood, who was also involved in discussions, said the State Government’s upcoming expression of interest phase for ‘clean coal’ technology developers to access the brown coal resource was an integral step in transport infrastructure development.

“The EOIs are about drawing out some of those opportunities; we might have to utilise the coal for export or local use, but you need to know what each project’s needs are in terms of logistic, and companies are not going to be able to build up that project unless they know they have allocation to the resource,” Mr Blackwood said.

Latrobe City mayor Ed Vermeulen said the discussions were about ensuring both transport infrastructure and major projects evolved in tandem with each other, as opposed to a “one before the other scenario”.

“We’re not looking for any great assurance (now), but its about coordinating the approach; we need to keep the minister informed, so he can go to Cabinet with a comprehensive knowledge of our evolving needs,” Cr Vermeulen said.

“Once a project becomes a real possibility, we don’t want to be caught out.”