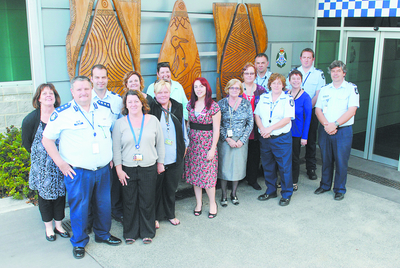 THE launch of the Latrobe Family Violence Unit has been welcomed by partner agencies as a “great benefit”.

According to Gippsland Women’s Health Service family violence regional integration coordinator Kerry Hamer, the setting up of the designated unit would allow for a consistent and coordinated approach to tackling the issue of family violence head-on.

“It will also allow the more complicated cases to be seen through,” Ms Hamer said.

Speaking after the official launch of the Family Violence Unit at the Latrobe Valley Police Complex yesterday afternoon, Ms Hamer said many agencies were working a lot of the time above target.

Latrobe Inspector Mick West said police members were excited by the 12-month pilot, adding he was confident the unit would become permanent.

“This is a real milestone,” Insp West said.

“Latrobe is the seventh highest for reported incidences of domestic violence in the state and the only rural community.

“If we do things right, we may turn out to be a model for others in the state.”

Up to seven members would be involved in the unit, two of which could be newer members “fresh out of the academy”.

“We have more than 60 new young people now, who are keen to learn and raring to go,” Insp West said.

He said the members of the Family Violence Unit were specially selected based on their experience, passion for the issue, and commitment to making a difference.

To help “break the cycle”, Insp West said a designated response unit would be out on the streets during “high times”, namely Friday and Saturday nights, and Sunday afternoons.

He said the high reported incidents of family violence could be due in part to tough economic times as well as the ease of reporting and ability to reach out for help.