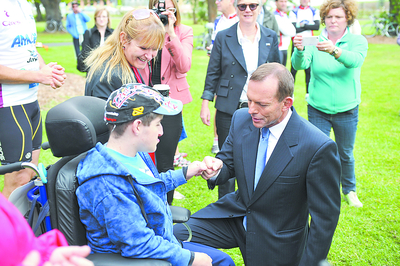 FEDERAL Opposition leader Tony Abbott and his colleagues were left in little doubt about the plight of Gippsland’s carers when they pedalled into Traralgon on Tuesday.

Gippsland Carers Association president Jean Tops delivered a “formidable” message of stressed and strained carers in desperate need of government support systems “that are not there” called for the funding of a regional carers network nationally.

Federal Member for Gippsland Darren Chester who, with a number of other federal Coalition MPs, was riding with Mr Abbott through Gippsland on his annual ‘Pollie Pedal’ bike ride for charity, commended Ms Tops for “giving it to us straight between the eyes”.

For the second time in the ride’s 15-year history it has come through Gippsland and this year it is aimed to raise up to $500,000 for Carers Australia.

Ms Tops was widely applauded for her tireless advocacy of Gippsland’s carers at a community morning tea at Victory Park where Mr Abbott claimed there was “no better cause” than carers, who were the “unseen pillars of our community…the best of us”.

Carers Australia chief executive officer Ara Cresswell said there were 2.6 million carers in Australia, equating to one in eight people, and “we all know that if unpaid carers were taken out of the system the government would need another $40 billion in taxes (to provide the same service)…it would send us broke”.

Mr Abbott said while the proposed National Disability Insurance Scheme, recommended by the productivity commission to replace all state and territory disability systems, enjoyed bi-partisan political support, “the (federal) budget would have to be back in surplus” given it was expected to be funded “out of general government revenue”.

Referring to the need for a Productivity Commission blueprint to precede the introduction of a NDIS, Mr Abbott said “we acknowledge people will be impatient; carers have been waiting a long time for this” but said it represented a “big, big change” and it would be “terrible to do it half-baked”.

Ms Tops shared the stories of a number of local carers with the crowd gathered in Traralgon and Mr Abbott later recognised they were “very moving stories” and there were “tens of thousands like this right around Australia”, adding “a lot of carers are doing it very, very tough”.

“Some of the stories Jean told us were really quite heartbreaking and they help to motivate us to do the right thing and obviously help to reinforces the case for a NDIS,” he told media later, adding “it is an important social reform which will change millions of people’s lives for the better”.

Funds raised from the ‘Pollie Pedal’ were expected to support the establishment of a “really sophisticated website to help put carers in touch with support services and each other”, Mr Abbott said. “Obviously that’s particularly important for regional Australia”