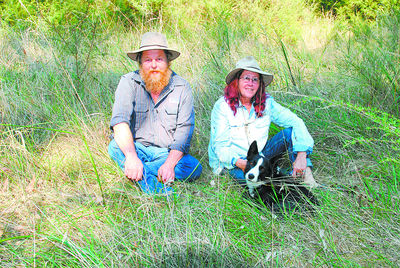 IT WAS the trip of a lifetime for Queenslanders Craig Landy and Shirley Marr, who may be the 19th and 20th people, respectively, to complete the challenging Bicentennial National Trail.

The couple, who are now resting at Mr Landy’s parents’ home in Newborough for the next few weeks, look back on the five years they spent travelling and working along the trail and say they miss being in the bush.

“Every day that we were on the trail, we asked ourselves why we were doing this,” Mr Landy said.

“But it was a massive achievement for us both; we’re a lot stronger than we thought we were.”

“The trail is certainly not for the fainthearted,” added Britain-born Ms Marr, who came to Australia at the age of 12.

The “long-haul” riders wound up their 5000 kilometre journey with their six horses in Healesville on 3 March.

In what Mr Landy said was a curious coincidence, famed equestrian explorers and the first couple to have ridden the trail, Ken Roberts and Sharon Muir Watson, also finished their journey on 3 March 1991.

The couple began their journey from the Atherton Tablelands, some distance from the start of the trail in Cooktown, and travelled in a gypsy wagon with their cat and dog, Max.

During their sojourn, they rode and worked in various towns, and encountered floods, injuries, illness, and much more.

“I missed hot showers and cooking while standing up,” Ms Marr recounted.

“I missed having an electric jug and fridge,” added Mr Landy, saying every time he wanted a cuppa, he needed to light a fire.

Readjusting to the comforts of modern living after years on the road has brought its own challenges.

According to Mr Landy’s mother, Pam Landy, after years of sleeping on the ground, they have become unaccustomed to sleeping in beds.

Their digestive systems have also taken time to get used to the food, the longtime Latrobe Valley resident said.

“Being on the trail with only the things you need, you realise what a throwaway society we’ve become,” Ms Marr said.

The wild beauty of nature has the two firmly in its grasp; they plan to get back in the saddle soon.

“After a few weeks here, we’re going to Goulburn to pick up a horse truck and go back to finish the 400 or so kilometres up north,” Mr Landy said.

From there, the pair have plans to write a book, which has already been bequeathed with a title – ‘The Flight of the Black Cockatoos’ – in tribute to what they believe became their totem animals during their journey.

“They were right there with us when we started,” Ms Marr said.

“One day, we were lost on the trail and were wondering where to go…we saw three black cockatoos in flight and suddenly though ‘we should follow them’; they led us back on the trail,” Mr Landy added.

They have plans to publish the book themselves, before once again hitting the trail – this time, in Mongolia.

In another stroke of fate, the couple met Hazelwood resident and aspiring doctor, Sam Alexander, who embarked on his own expedition along the trail recently, to raise funds and awareness for the Royal Flying Doctor Service, in Marysville.

“He’s a great guy and we wish him all the best,” Mr Landy said.

When asked what advice they would give others who might take on the trail, Mr Landy said “make decisions, and stick by them. Believe in yourself”.

Ms Marr added “the Bicentennial Trail is beautiful – use it or lose it”.