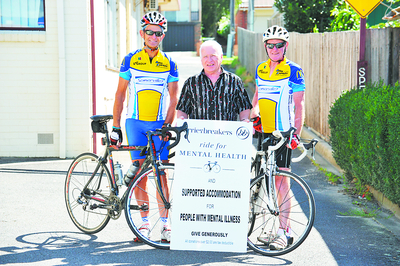 A BID to support residents affected by mental illness has inspired two Gippsland cyclists to tour the region, raising thousands of dollars.

Bicycle Victoria cyclists Lance Hunt and Iain Fraser are currently braving the weather to raise $15,000 in aid of a proposed six unit accommodation facility for residents affected with a mental illness.

A project initiated by Gippsland mental health advocates Barrier Breakers, it has gained the support of Latrobe Regional Hospital, the Ministry of Housing and MIND Australia. “I’ve been to the deepest hole anyone can imagine so I understand the illnesses associated with depression,” Mr Hunt said.

“The homeless people on the streets are usually affected by some mental illness and it’s important to do whatever we can to get them off the streets and provide a roof over their heads.”

The proposed accommodation facility will be used to assist patients who are discharged from acute care back into the community, but who for a period still require continued clinical support.

Barrier Breakers chief executive Derek Amos said despite the region having more than 4000 people seriously disadvantaged by chronic orsevere mental illnesses, there were less than 100 fully supported accommodation units in the region.

“The need for supported accommodation is great throughout Gippsland so it’s crucial to get the message out across all towns.”

Mr Amos added the proposed facility would be a pilot project, with hopes to inspire similar sites at Wonthaggi, Bairnsdale and Sale.

The project which is expected to cost an excess of $1 million will be set up in Traralgon, with construction to begin this year.

“We’re truly grateful for Lance and Iain and we hope the community get behind in supporting them in their mission,” Mr Amos said.

The cycling duo have previously raised $10,000 for Barrier Breakers and hope to reach beyond their target to assist in the construction of the proposed accommodation site.