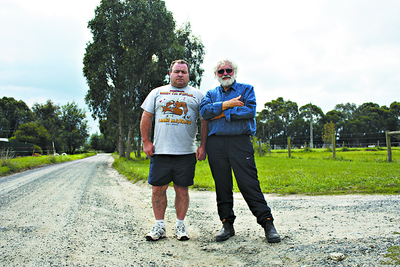 RESIDENTS of Traralgon East are hoping a 500 signature-strong petition will persuade Latrobe City Council to adopt a “common sense” solution to one of its perennial issues.

At a council meeting next week, councillors will decide whether it will place permanent barriers on Rocla Road in Traralgon East.

To a majority of residents, however, the issue is just history repeating itself.

“This is most frustrating as there has been two previous inquires, one by the-then Traralgon Shire and later the council – both found that Rocla Road should remain open,” Traralgon East resident James Grubb said in a letter to council.

“For us it is also a safety issue at times of high traffic flow… to access Dranes Road via Rocla Road rather than the Glengarry-Maffra Road.”

Mr Grubb said access to Dranes Road and the Princes Highway via Glengarry-Maffra Road proved to be “unsafe” after he was hit by a car twice within the span of 12 months.

He added many people travelling along the Glengarry-Maffra Road failed to obey road rules and often overtook vehicles on the double line road.

“Rocla Road is the safer route and that has been presented three times before council,” he said.

“I would be disappointed if (council) decided to close the road.”

“We’ve wanted this road open since 1992 when it came before the (Traralgon) shire,” Ms O’Dea said.

“The Country Fire Authority has also supported the retention of the road as (providing) necessary fire fighting access.

“We want the road open, upgraded, sealed and with speed deterrents put in.”

According to Latrobe City Council, complaints regarding the use of Rocla Road had been received from Traralgon East resident Pat Andjelkovic and her husband since 2000.

The Andjelkovics, whose property lay on the corner of Dranes and Rocla roads, questioned the authenticity of the petition, adding most people who signed the petition “don’t even live around here”.

“None of the other residents suffer from all the dust like we do,” Ms Andjelkovic said.

“I can’t open the windows because of all the dust – Rocla Road is only used because it’s a shortcut that’s all.

“People who complain about it live on the other end of Dranes Road and don’t witness vehicles speeding along that road on a daily basis when the speed limit clearly says 40 (kilometres per hour).”

Another resident whose property lay on Rocla Road said if council was to “listen to the complaints of one person” and close the road, he would not only have to build a new driveway, but it would also affect his quality of life.

“I would have to travel an additional two and a half kilometres just to get milk or the paper or go to the gas station,” Rocla Road resident Pat Rutter said.