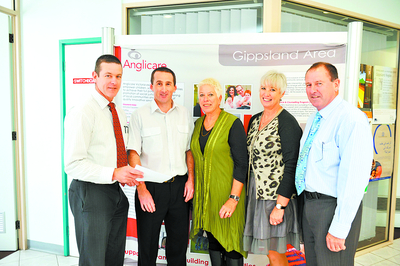 Anglicare Victoria, Queen Elizabeth Centre and Quantum Support Services are partners in delivering the service to the women, which would amount to about 700 hours of support.

In an announcement last week, Anglicare Victoria Gippsland area manager family services Tim Pedlow said the funds, which would even out to $400,000 a year, would go toward assisting about 24 young mothers from pregnancy to the time the child is four years old.

“The ‘Cradle to Kinder’ program will probably commence in April 2012,” Mr Pedlow said, adding the agencies had no clients for the service as yet.

Mr Pedlow said the funds were “above and beyond” the recently-announced $2.3 million in funds for the Child and Family Information, Referral and Support Teams program.

According to Mr Pedlow, 10 to 15 per cent of referrals received for the Child FIRST service in the region were for expectant mothers, which was 10 times above the national average of 1.5 per cent.

“This illustrates the need for such a service here,” he said.

State Member for Narracan Gary Blackwood said the program would be a great help to many in the region.

“This is an area we have identified some time ago, and a good complement to the Child FIRST service, and help address issues before it leads to bigger issues,” Mr Blackwood said.

“There is a need to stabilise family environments,” Mr Northe said.

“This is an exciting initiative and a substantial investment in an area of need, supporting vulnerable young mothers.”

The focus of the program are young mothers under the age of 25 who may have had a history of involvement in child protection or youth justice, or where there are protective concerns for the unborn child, he said.

Latrobe and Baw Baw were one of five regions identified to share in a $16 million State Government allocation over four years for the intensive parenting support program for young mothers and their children.