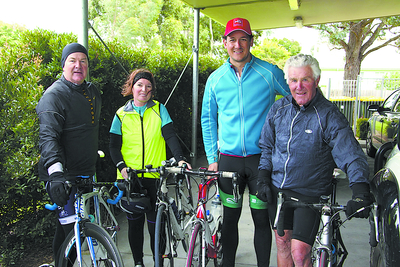 LOCAL cyclists showed their support for the fundraising efforts of ‘Brisbane 2 Melbourne’ cyclist Sean Sampson recently by joining him, in terrible weather, on his ride through Rosedale and Traralgon.

Keen local cyclists including father and son duo John and Geoff Stewart and Jo Richards lent Mr Sampson some moral support as he battled through one of the toughest legs of his epic 14-day journey in aid of two charities.

Later in his blog, he expressed gratitude for the dedication of the three local riders who braved wind gusts of up to 80 kilometres per hour, blinding rain and hail to be part of his trip.

Although he appreciated the Latrobe Valley’s scenery, he said “the going was tough, and with nowhere to take shelter, we had to just keep plugging on”.

Just two years ago the 30 year-old Melbourne-based rider had done little more on a bike than “the odd turn on a BMX with mates”, by his own admission.

After starting a daily cycling commute to work, the self-processed junk-food lover started looking for a new challenge.

What eventually evolved was a physically demanding adventure along Australia’s eastern coastline which, for Mr Sampson, was about raising money for the work of Foundation 5Million and Cottage by the Sea- charities dedicating themselves to Multiple Sclerosis research and caring for Australian children and families in need, respectively. Mr Sampson’s parents, Paul and Roz, were the support crew as their son traversed thousands of kilometres on the road, contending with volatile conditions, eight punctures, two rear tyres, logging trucks, countless roadworks and pot holes on back roads. Along the way he was joined by other riders keen to support his efforts, some for five kilometres and others for more than 100.

Morwell rider Ms Richards, who joined Mr Sampson in Rosedale and rode to Traralgon via Flynn and the Loy Yang power stations, said while finishing the local ride in such tough conditions was “a real buzz” she was “very glad we only had to do it once”.

Mr Sampson, meanwhile, celebrated the end of his journey the following day with a well-earned beer after arriving in Melbourne. To donate to Foundation 5Million or Cottage by the Sea, visit