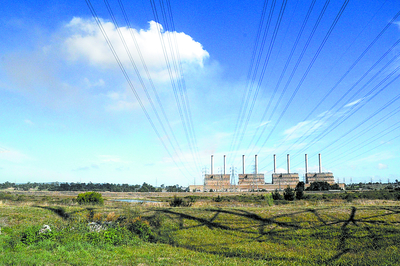 FEARS any future power station closures in the Latrobe Valley could result in derelict, unused industrial sites and an erosion of Latrobe City Council’s income base, have been raised by council.

Council resolved last month to seek discussions with state and federal ministers on the consequences of closing power generation on any former SECV ‘works areas’, including rating and zoning considerations.

Since then, multiple local concerns have emerged in response to the lack of detail in the Federal Government’s proposed ‘contract for closure’ scheme. The scheme seeks to close 2000 MegaWatts of coal-fired electricity generation by 2020.

Not the least of those concerns is the potential loss of a portion of the $7.28 million in annual payments ‘in lieu of rates’ received by council from power generators in the municipality.

Latrobe City chief executive Paul Buckley told The Express council had asked the Federal Government how this loss of income would be “treated from a municipal point of view”.

Latrobe City Mayor Ed Vermeulen said even senior government bureaucrats indicated, in discussions with council, they had not yet considered these matters.

“I think it is part of council’s job to bring these issues to the fore as they are an important part of what we are talking about,” he said.

Mr Buckley said council was keen to ensure it was not left with another ‘Lurgi’ on its hands, referring to the former Lurgi gas site which now sits idle.

“We don’t want a derelict industrial site not available to the market for alternative uses,” he said.

It is believed Department of Primary Industry regulations stipulate mine remediation is the obligation of existing power company owners, the same responsibility does not appear to extend to power plant sites.

Mr Buckley said council had questioned what would happen to a site if generation ceased and the facility was no longer covered under electricity generation legislation.

While power companies owned the sites on which they were located, they paid royalties to the State Government for access to coal in the mines, with the mines being “un-rateable”, Mr Buckley said.

“If a power company closes its site, is the current owner required to clean-up the site?” he asked.

“If they walk away and leave it vacant, does it become crown land, which we can’t rate?”

Further, if the land remained in private ownership, Mr Buckley said council did not want to see a situation where owner’s hung on to it but “it would hold minimum value on their balance sheets”.

Contract for closure negotiations would need to determine whether the Federal Government committed to buying power plant sites, or whether existing companies would retain ownership of the sites which might be retrofitted and used for alternative purposes in the future, but remain idle in the meantime, he said.

“Can (existing) companies still exercise a right to the coal or does it revert back to the State Government?” Mr Buckley asked.

“The clarity has not yet been offered and there is a long way to go in this process,” he said, adding that an “ideal scenario”, from council’s perspective, was one where sites would be made available for the development of new industries and alternate uses of the coal resource, using new technologies.

If there was “no intention to do that”, council would prefer the land became “normal industrially zoned land”, Mr Buckley said.

Cr Vermeulen said the current uncertainty made a good case for ensuring expectations were clear in future transactions.

“Then any entrepreneur who wants to come in and do something here will know what they are up for and we would want to see some sort of remediation obligation built into a business case,” he said.

“At the same time we would welcome any business or power generator or mining company who would be willing to come here and take advantage of our resource but it also has to have a local dividend…” he added.

A spokesperson from the Federal Government’s ‘contract for closure’ program did not respond to calls from The Express at the time of publication.