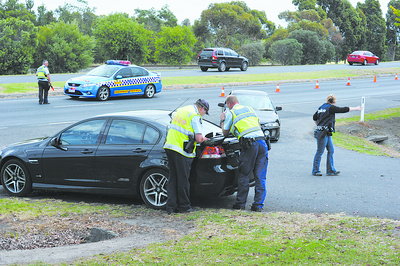 Morwell Police, together with the Sheriff’s Department used high technology automatic number plate recognition cameras to flag down drivers in Morwell and Moe.

In total, 53 people were caught during the two-day operation for outstanding fines and driving offences worth more than $100,000.

“We will be out at random locations, with no set times, dates and, or places,” Snr Sgt Dastey said.

“We can be set up night or day, no matter the time or conditions.”

The automatic number plate recognition technology is capable of scanning up to 700 cars an hour and cross-references each plate with an online database within seconds.

Snr Sgt Dastey said the number of vehicles scanned during the blitz exceed more than six months worth of manual scans.

A machete was also seized during a vehicle search.

Snr Sgt Dastey said a women, with a $265 overdue speeding ticket, was fined $4500 from accrued penalties, served as a warning to people with unpaid tickets.

“This operation will happen a lot more because of the results we got,” he said.

“We are getting these people off the roads for safety; if someone’s car is unregistered, their car has no insurance or Transport Accident Commission coverage.”

The crackdown will continue throughout the year with Morwell Police warning it would randomly patrol the entire region.

“It is good for us and the Sheriff’s Office, because all those people defaulting are getting caught up with,” Snr Sgt Dastey said.