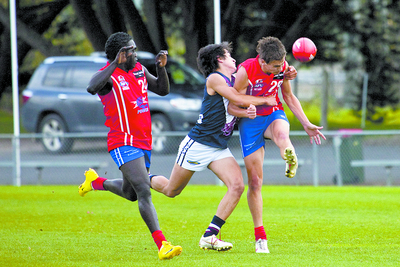 LOY Yang B Gippsland Power faced the toughest test of their 2012 TAC Cup campaign on Saturday, when they took on the only other undefeated side the Sandringham Dragons, at Morwell.

Neither side went into this “clash of the titans” at full strength, but Power coach Nick Stevens was fully aware the Dragons were going to test his team’s resolve.

The Power were without key senior players Simon Deery and Kaine Allen who were both missing due to minor injuries, but the Dragons were much worse off missing several key players due to school football commitments.

On a positive note, Power captain Tim Membrey returned from a magnificent trip to Europe with the AIS/AFL academy.

Despite having the opportunity of a lifetime visiting Italy, France and England, Tim was grateful to be home and to have the chance to play with his mates again.

It did not take Membrey long to make a stunning impact on the game as he marked strongly and kicked the side’s opening goal after some strong work by Nate Paredes and Shannen Lange in the centre at the opening bounce.

It appeared to be a sign of things to come for the Power, as Lange was at his busy best when he found tall forward Josh Scott, who kicked another for the team. Jayden Steers found his Traralgon teammate, Matt Northe and kicked another to make it look like the Power were ready to take the vital game by the throat.

Yet the Sandringham boys capitalised on the Power’s poor defence as they were caught out on the rebound by the hard working Dragons.

It took some more hard work by Lachie Channing and Paredes to allow Tom Muir to kick the side’s fourth goal.

For the rest of the first term, neither side was able to score as they worked hard in defence but wasted scoring opportunities with poor decision making.

By the end of the term the Power’s lead was 17 points but the game was still competitive.

It was obvious the Dragons were more than ready to exploit any flaws in the boys’ work rates, and there was a need for the Power to ‘up the ante’ in the second term.

This was obvious at the start of the second quarter as some more slack defence by the Power gave the Dragons the opening goal.

It took a long kick into the forward fifty by Tom Fusinato to set Membrey up for another strong mark and goal, but this was the Power’s first major in almost thirty minutes of play.

The Power went into attack again and there was a real scramble in the goal square which saw Ben Kearns create a vital goal from almost nothing.

At the resultant centre bounce, the Power won the clearance and Will Hams weaved some magic to give himself the time to score another goal for the Power.

Once again, the Dragons hit back when it appeared the Power were ready burst away, as they exploited some bad defensive decision making.

By the long break the Power led by 22-points.

It still appeared as though the Power had the Dragons’ measure, but any slackness in their effort was exploited by the Dragons.

Some excellent pressure by Hams resulted in another Membrey mark and goal for the Power, but for the rest of the term the Dragons took control of the game with their willingness to apply pressure on the Power’s decision making skills.

The Power was kept to only two more goals and by the end of the quarter they led by six points.

It was time for Nick Stevens to challenge the boys to increase their work rates all over the field.

The Power is considered the fittest team in the TAC Cup and once again, this was to be the key to their ability to meet Stevens’ challenge.

The Power had control of play for much of the early part of the term and Daniel Jackson found Scott who kicked his second goal for the game.

Just when it appeared the Power were going to dominate the last term, the Dragons scored two late goals to reduce the final margin to 13 points.