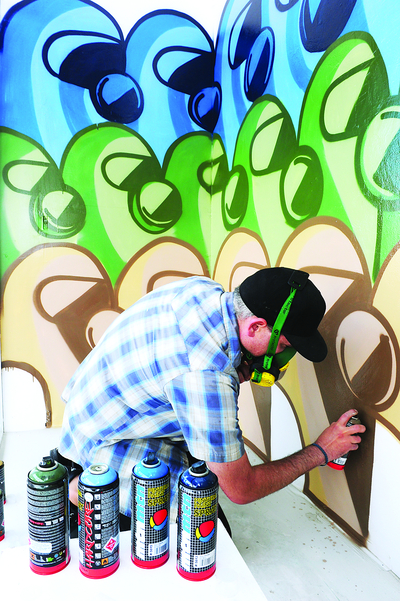 “Some people make lots of money off this kind of art, but other people go to jail.”

That is the conflicted reality faced by one of the most rapidly evolving art forms in the country; street art.

Speaking to The Express before the gallery’s upcoming street art demonstration, Braddock said the fact he had been invited to the Valley to present his urban craft in a regional setting was testament to its gradual acceptance as a ‘legitimate’ art form.

“Some people don’t like it; it’s in your face, but so is advertising, which we see everywhere on the street; it works on the same kind of parallel, and that’s offensive to many people,” Braddock said.

“It’s a fine line, I know, but it’s a public space, and we as the community have a right to respond.”

For Braddock, a comic artist brought into the scene through encouragement from existing street artists, the community culture that fuels the spread of the artform’s take up was a core reason behind the art form’s widespread popularity.

“It’s about community and sharing time, working on pieces in the public space for everyone to share; we are here to put something in the community, and we just hope that someone will get inspired by it,” he said.

To be held as part of the Creative Gippsland arts festival, local artists Geoff Sharmen and Kate Zizzy will give street art demonstrations at the Latrobe Contemporary Gallery on Saturday from 2pm, followed by drinks and an open mic session.