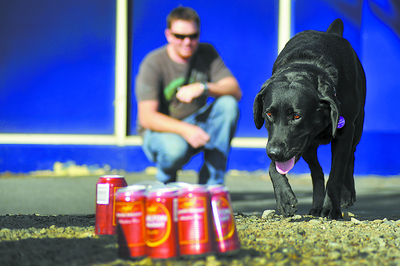 CLEVER canine Bes is the epitome of a man’s best friend.

The six year-old Labrador’s unusual talents of fetching her owner a beer from the fridge, beat more than 630 entries to win the national PETstock Pet Tricks competition.

Rosedale resident Lee Marriott said he taught Bes the trick as a “spur of the moment thing”.

Bes’ talents include opening the fridge and carrying a can of beer to Lee, as well as fetching the remote control.

“It is much like fetching a stick, it is the same principle,” he said.

Popular with the party tricks, Bes is also capable of the regular “sit, stay, shake hands, beg, lay down and roll over”.

“I guess she is the ultimate man’s dog.”

Lee’s friends are also reaping the rewards of the trick and frequently enjoying Bes’ cold beers.

But the biggest prize goes to Bes’ master Lee who nabbed himself a Holden Captiva from Colin Watson Holden, Traralgon for winning the competition.

Lee will also be a proud grandfather, with Bes due to whelp on 12 June.

Lee is hoping she has more than six puppies, which is the number of pups he has already sold due to her clever reputation.

However, Bes’ party days are not over, with Lee assuring he will be entering her trick in future competitions.

Bes’ winning trick can be seen at