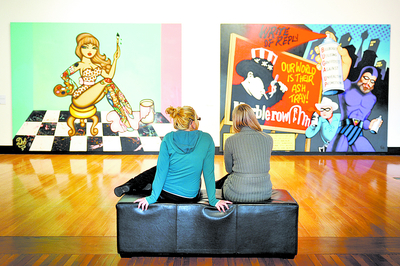 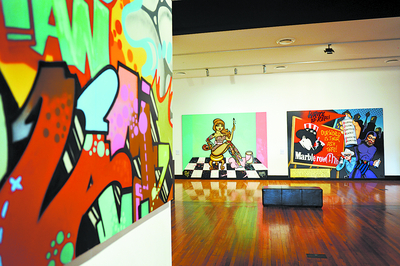 Where people were seeing nuisance and dirt, Tugi Balog saw the opportunity to document history.

“Graffiti has been happening for centuries; it means something because it’s a statement about the society these people live in,” Mr Balog said.

“It’s a beautiful thing, and most of it isn’t kept.”

So Mr Balog’s outdoor graffiti space was born, the May Lane Art Project.

Back in 2005, the Croatian-born classical archeologist was running a business out of an old building in St Peters in Sydney’s inner west.

To the dismay of residents and building owners, blank walls on the May Lane buildings were attracting young graffiti artists who tagged after dark, knowing their work would be torn down soon after it went up.

Appreciating what was being created, Mr Balgo approached the building owners and suggested turning the space into an outdoor art gallery.

“So we formalised everything and invited artists to come and have residencies at the space,” Mr Balog said.

“We cut into the sides of the buildings and inserted canvases so each piece can be kept.

“Now there’s a two-year waiting list for artists from all over the world who make submissions to paint here (at May Street).”

To be selected, artists must be “doing something out of the box, not just tagging”.

Chosen artists complete a week-long residency, and their work is displayed for one month.

“We have a great space inside one of the buildings where artists can meet and talk about ideas,” Mr Balog said.

World renowned street artists including Phibs, Die Laughing and Cultural Urge have all completed residencies at May Lane, and according to Mr Balog, each one has something important to say about a time and place in history.

“The great thing about having the art outside is that everyone can see it,” he said.

“It’s harder to get people inside to galleries and exhibitions, with this they can see it as they’re walking past.”

According to Mr Balog, May Lane has about 600 people passing through it each day, making it “the most visited art gallery” in Sydney.

However, Mr Balog also reinforced he did not want to attract too much attention to the May Lane project, as most of the artists wanted anonymity.

“It’s part of the culture, it’s a lifestyle for these guys and most of them want to be ‘underground’ so to speak,” Mr Balog said.

“It’s great we can take these past works on the road, display them and move on.”

May’s: The May Lane Street Art Project will be on display at the Latrobe Regional Gallery until Sunday, 24 June.

Phibs will be conducting workshops at the gallery on Saturday and Sunday.