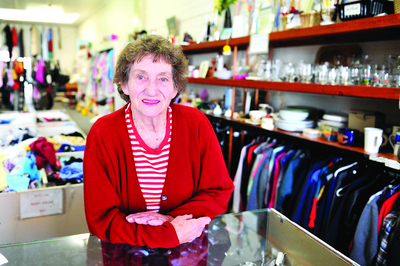 “I’M a long stayer,” Cooinda Hill volunteer Margaret Schneider told The Express recently, with a twinkle in her eyes.

Mrs Schneider, aged 75, has been a volunteer at the front desk of the opportunity shop in Buckley Street, Morwell, for nearly 17 years.

Before that, Mrs Schneider was a prep level teacher at Crinigan Road Primary School for two decades.

“I’ll stay here until they throw me out,” she joked.

Mrs Schneider began volunteering after retiring from her career as she wanted to “do something useful”.

“I visited Cooinda Hill and heard about the wonderful work they do and that they needed volunteers, so I came in, and have been here since,” she said.

For three hours a week, and when she is needed to help fill in for those on holidays, Mrs Schneider greets customers and tallies up their purchases at the front desk of the op shop.

“Because I was teaching for so long, I didn’t find it difficult to come in regularly,” she said.

“Some people might think because you’re a volunteer, it doesn’t matter, but I know it does, and how important it is to be reliable.”

The best part of her job was interacting with customers, although Mrs Schneider said she was sometimes called on to offer a sympathetic ear and a shoulder to cry on.

“Sometimes the customers come in with a joke; other times they come in to cry,” she said.

“But the best thing you can do is just listen and maybe offer some help; give them a pat on their back and they go off feeling better.”

Throughout the years, Mrs Schneider said volunteering at the op shop had reminded her to be appreciative of life and what she had.

“It makes you aware you’re not as badly off as you think you are; if you think you’ve had a bad day, some of the things the customer tells you makes you think, ‘oh, I’m lucky!'” she said.

Her years of helping out has also made her good friends with other volunteers, whom she said sometimes stayed until they were 80 years old.

“I’m not far off being one of the oldest volunteers, but I’m still a newcomer here,” Mrs Schneider said, adding some volunteers were with the shop for 40 years.

Among her enjoyable experiences is having some of her old students come in with their children or grandchildren.

“A lot of them come in and talk about their kids; I love that,” she said.

“I get so much more out of volunteering than I give; I just give my time and I do what I can, but I get so much back.

“We do something important for the community, and it is appreciated.”

Cooinda Hill currently provides life experiences for about 50 people with a disability.