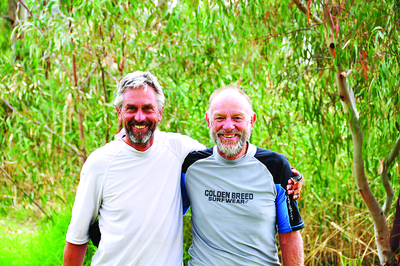 TRARALGON golfing buddies Lindsay Chard and Jeff Blackman have proved age is no barrier to adventure by kayaking the full length of the Murray River.

“We joked with the kids that they wouldn’t walk 100 metres to the shops and we’re going to kayak the full length of the Murray River,” Mr Chard said.

With almost no kayaking experience, Mr Chard and Mr Blackman set off on 24 March and floated into Goolwa 44 days later, on 3 May.

The pair took about 12 months to plan the trip and according to Mr Chard, much of that time was spent selecting the kayak.

“We needed something pretty big because we had to carry about five days worth of supplies including our tents,” Mr Chard said.

To prepare physically, the duo enrolled in a six-month gym course to build their upper body strength and remarkably, had just three months of paddling practice before taking off.

“We did most of our preparation out on the Hazelwood Pondage,” Mr Chard said.

“Three times a week we’d go out and paddle for about three or four hours.

“It’s like (training to be) a marathon runner – you slowly build up to it and in the end you know you can do the bigger distance.”

Mr Chard said he and Mr Blackman were on the water each morning by 6am and finished most days about 4pm.

“Those first few hours, early in the morning when the mist was on the water were just magic; it was incredibly beautiful.”

Aside from the natural beauty they were experiencing, Mr Chard said the best part of the trip was meeting new people.

“Every five days we’d stop at whatever town we were at to replenish our supplies and have a shower, and we’d end up talking to the locals about their town and where they were from,” Mr Chard said.

“Some of the people we met were incredible, people with checkered histories and others who were just plain hilarious.

“Everyone had their own story to tell and it was just brilliant.”

They also spoke to ‘Macca’ from the Australian Broadcasting Corporation’s ‘Australia All Over’ program, and found they met people along the way who had heard them on the radio.

Apart from experiencing “general soreness” most days, Mr Chard said the mental challenge was the biggest.

“Physically we were pretty okay, but the mental side, getting up and going again every day was probably the toughest part,” he said.

According to Mr Chard, they “didn’t get sick of each other at all” and are now looking for their next adventure.

“It really opened our eyes and I’d recommend it to anyone looking for an adventure.”