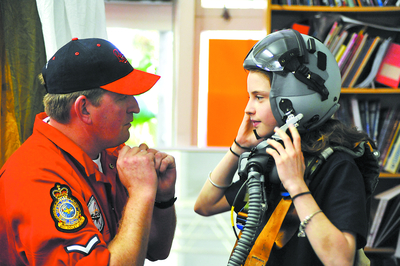 THE view from a Royal Australian Air Force Roulette pilot’s seat was a thrilling experience for Cowwarr Primary School students.

Students had the front seat views to an aerobatic display on film put on by the RAAF Base East Sale with the support of Airflite East Sale.

The display was part of a tour of the region’s schools to publicise the RAAF Roulettes in the community.

Children discovered the technicalities of flying a “Ferrari of the sky”, a Pilatus PC-9A, a two-seat single-engine turboprop aircraft, which is the advanced training aircraft of the Australian Defence Force.

“Each pilot flies their aircraft only three metres from each other, at times only 200 feet above the ground,” Corporal Stephen Edwards said.

However, the excitement of the video was not nearly as interesting as learning how to survive when controlling an aircraft plunging into the ocean.

Students Amy and Chelsea were strapped into pilot outfits, and staged emergency situations and survival methods throughout the presentation.

The inflating of Amy’s life jacket was a demonstration the students found amusing; however, Corp Edwards reminded students of the severity of aircraft accidents.