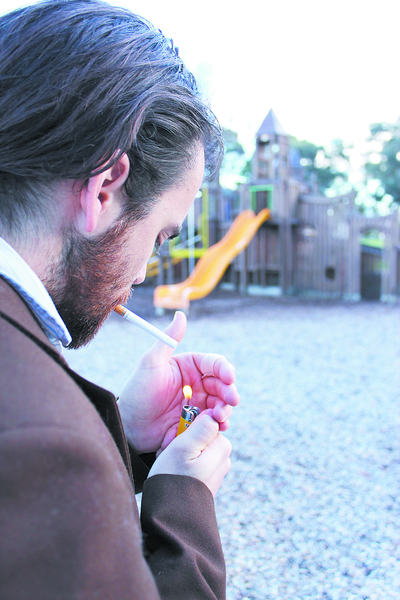 A PROPOSAL to ban smoking in outdoor dining areas and playgrounds has triggered mixed reactions in the Latrobe Valley.

A growing push by various groups including the Municipal Association of Victoria, Quit and the Australian Medical Association (Victoria) to extend outdoor smoking bans across the state could see a new policy introduced in Latrobe City.

Although Latrobe City Council has said it will await an outcome to the MAV’s formal proposal to the State Government before implementing policy change locally, the MAV has clearly supported expanded bans.

When The Express asked, on social networking website Facebook, whether council should pursue a ban on outdoor smoking in dining venues, playgrounds and sports grounds in the Valley, it drew a large, and divided, response.

Responses varied from concerns about how effectively bans would be enforced to how smokers were being discriminated against and treated like “lepers”.

Merryn Price said if the bans were imposed, people would stop attending community activities, while Allie Kohana said if smoking was subjected to such restrictions there should be a blanket ban on all tobacco/nicotine, adding this would “never happen” due to lost tax revenue.

“I have never seen people fight or crimes occur when only tobacco smoking is involved…however ask any police officer or emergency nurse or doctor about how many times they have seen any alcohol-related incident.” she said.

Another reader claimed exhaust fumes from vehicles posed a greater risk to outdoor diners in the Valley and while smokers tended to “be considerate and sit down-wind of other diners”, drivers showed no such consideration.

Some smokers were defiant in their right to smoke outside at dining venues, saying “if you don’t like people smoking near you, eat indoors”.

Equally, non-smokers expressed frustration at smokers “stinking out” outdoor eating areas, saying the dangers of exposure to passive smoking were well-known and that diners should not have to be forced to inhale “someone’s toxic fumes”.

One reader, a chronic asthmatic, told The Express exposure to second-hand smoke outdoors had triggered asthma attacks severe enough to land her in hospital.

Although it claimed the trial had been well-received and successful, those who commented on The Express’s Facebook page said people in the Warragul central business district continued to “blatantly smoke in full view of signage” (banning it).

“I live in the Baw Baw Shire…people are still smoking in the town centre even with the signs and notices up,” Ben French said.

“If you are going to ban it, then fine the people who are breaking the ban or what was the point of even starting it.”